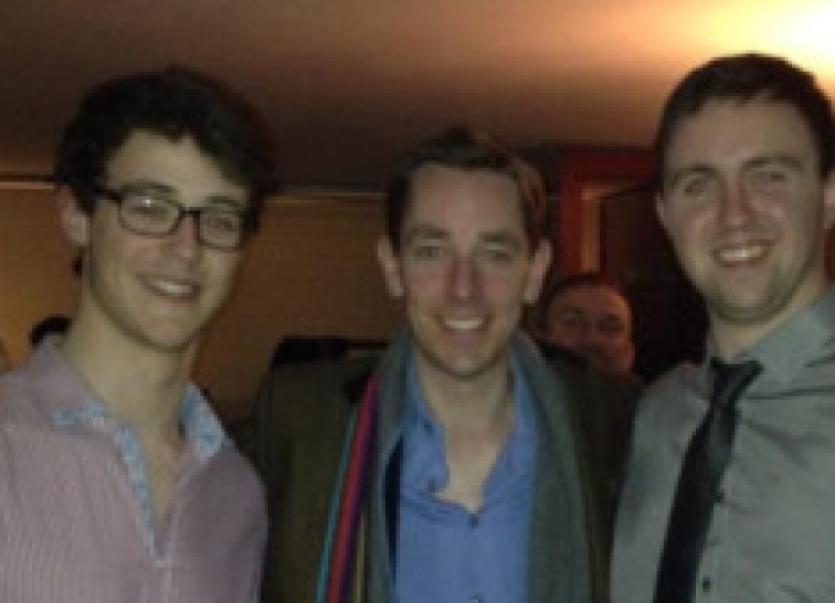 aN 18 year-old student film-maker at the University of Limerick looks like he has a bright future, after the video he produced has become a YouTube hit, amassing around 230,000 views.

aN 18 year-old student film-maker at the University of Limerick looks like he has a bright future, after the video he produced has become a YouTube hit, amassing around 230,000 views.

Michael Boyle, of Actium Films, directed and edited the hit parody video of the Wolf of Wall Street, which has seen Tommy Bolger from Carlow be elected as the next students’ union president in UL.

The video has attracted interest from across the world after being featured on The Guardian, the Huffington Post, Spanish media sites, and also earned the duo a spot on The Late Late Show with Ryan Tubridy on Friday last, such was the frenzy over the video.

“It all happened so fast,” Michael told the Limerick Leader. “We didn’t expect this reaction at all. We thought it would get a couple of thousand views at most.”

The video, modelled on the film about Jordan Belfort, the infamous Wall Street stockbroker and starring Leonardo diCaprio, was shot over four days around the Plassey campus and Castletroy.

Michael explained that he is self-taught in the techniques of film producing, and has been making animation videos for several years. Originally from Galway, he initially signed up to do a course in games development at UL, but has now transferred to multi-media, and hopes to narrow his focus to film-making in the coming years.

In the two and half minute video, Tommy, the engineering and technology education student begins with this introduction: “My name is Tommy Bolger. The year I turned 22 I made €8 an hour, which really pissed me off because I had to eat beans and toast for dinner four days a week.”

The dizzying heights, hedonism and excesses of Wall Street have been replaced with similar, if less energetic scenes of student life in Castletroy, with cocaine being replaced by the powdery sweets DibDabs and bottles of champagne replaced by Buckfast and naggins of vodka. “What can I say? I live the student life,” he says, as he discards a slice of toast while walking to college. “I’m a man of the people, and that’s why I’m running for Students’ Union president.”

He also mimics Matthew McConaughey’s famous scene at the beginning of the film, when speaking about the stock trade works. “Hey, it’s a fugayzi, fugahzi, it’s a wahzi, it’s a woozie, it’s fairy dust. It doesn’t exist. It’s not real.”

On a more serious note, Tommy said he believes “the union has a lot to offer and not enough people are benefiting from it.” He was elected with over 2,000 votes.