RTE’s Nationwide to focus on Limerick through Tom and Paschal 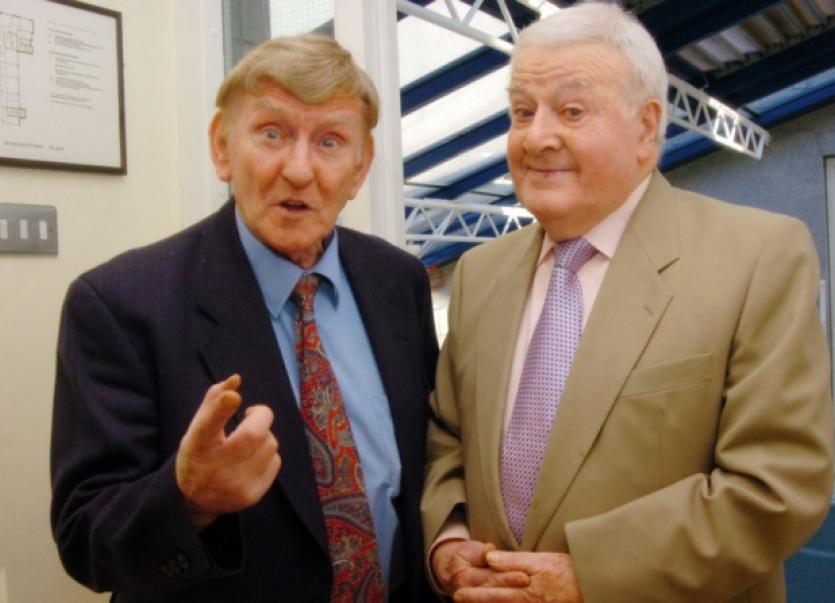 TWO statuesque figures of the Limerick entertainment world are to be celebrated by RTE’s Nationwide this week.

TWO statuesque figures of the Limerick entertainment world are to be celebrated by RTE’s Nationwide this week.

Long time Limerick entertainers Tom and Paschal are to feature on the programme, while the recent visit of the Giant Granny is also to be marked.

The full programme will come from Limerick this Wednesday night “for a programme full of nostalgia and memories”, said a spokesperson.

Comic duo Tom and Paschal, who achieved international acclaim during their storied career, performing in the Royal Albert Hall in London and Carnegie Hall in New York, will be the focus of the programme, in a report by Marion Malone.

Nationwide will take a look back at the duo’s comedy career, including a never-before-seen interview Ms Malone conducted with Tom O’Donnell, who sadly died in February 2013.

Paschal O’Grady was interviewed for the segment, and told the Limerick Leader that it was great to reflect on old times and the “madness that struck Limerick at one point.

“They interviewed me a few months back,” he explained. “They are using old material, I think. They talked to a few people too.

“Hopefully it will jog a few memories for people - all the over 70s will get it,” he laughed.

“You can look back and think ‘was it really like that!’.

“By the way don’t ever retire!” he added with a laugh.

A late change to the programme saw RTE remove a planned segment on the Milk Market and replace it with correspondent Pat McGrath’s report on Royal de Luxe visit to Limerick for the flagship event for City of Culture.

This move follows criticism for the broadcaster for a perceived lack of coverage of the three day event, which attracted nearly a quarter of million people to Limerick to see the Giant Granny.

In the aftermath of the event only receiving one two-minute report on the Friday evening TV news on RTE, a spokesperson admitted that head of news, Kevin Bakhurst, “said he would have liked to have seen more of the event across their coverage on Saturday and Sunday, and this has been taken note of”.

Nationwide airs at 7pm this Wednesday on RTE One.