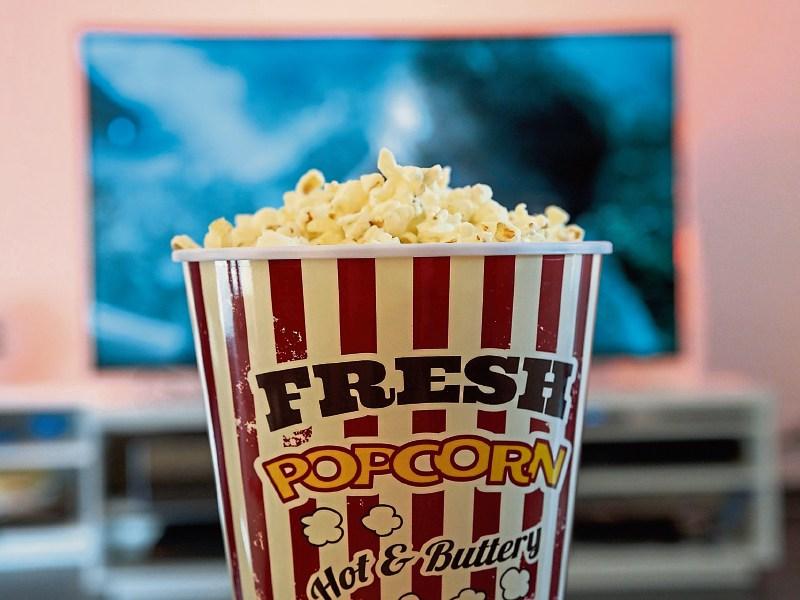 Ronan O'Meara has been scouring the TV schedules to find films to watch this Easter.

In the 1970's an African American policeman managed to con his way into the Klu Klux Klan using the secret combination of a telephone and a Jewish co-worker. Yup, it sounds like a joke but Spike Lee's 2018 film is based on a true story. It's also superb watching that manages to be tense as hell and surprisingly funny while always feeling horrifyingly topical. John David Washington, Patrice Dumas and Adam Driver all do first rate work.

A struggling waitress realises that she can supplement her income by catering to the strange needs of older men. Her services become popular fast but unwanted attention is coming her way too. This charming and insightful comedy drama might seem rather tame nowadays but it was actually banned in Ireland upon it's release 34 years ago. Julie Walters put in a stunner of a turn as Christine, a woman burnt by the hypocrisies of modern society.

A Romanian nightclub goes up in flames and dozens are killed and hundreds are injured. Then in the aftermath dozens more die due to shoddy health care. An investigation into it all uncovers corruption that reaches the high echelons of society. This 2019 documentary is a jawdropper, a deep dive exposé into the injustices that rattled a country and one that will remind you of just how ropey the people in charge really are.

Joe and Jerry have just witnessed the the St. Valentine's Day massacre and now they're running for their lives. To get out of town they disguise themselves as women and join an all woman music troupe heading for Florida. This is a classic that truly lives up to the hype. It's a scream, hysterical in parts and touching in others. Marilyn Monroe, Jack Lemmon and Tony Curtis are all on fire. A perfect Easter Sunday watch.

A cocktail of radiation and insecticide has done a job on Scott Carey and he's starting to get smaller and smaller. Life becomes terrifying when the things he could once crush underfoot are now big enough to see him as an hors d'oeuvre. This scifi/horror may be 64 years old be it's as effective as the day it came out and it's use of metaphor to deal the fears of the 50's still feel topical today. Grant Williams does stellar work in the titular role.

Who's Joan and why is she red? Joan's an English woman working in atomic research. She's also a spy who's been giving the secrets of England's nuclear industry to communist Russia for a very very long time. Parts of this film are, without doubt, kind of pedestrian and dull but a committed turn from the always reliable Judy Dench as latter day Joan, and a story filled with intrigue, will keep you watching until the end.

The Thief Of Baghdad: Easter Monday, Virgin Media One @ 7.45am

A young Iraqi Sultan is betrayed by a member of his own side and thrown into a dungeon. There he meets a thief who's destiny is to set wrongs to right. This feast for the eyes is 81 years old and still as full of wonder as it was when it was first released, if you can get by some of the dubious casting choices that is. Sabu as the titular character is good fun and Conrad Veidt as evil Jaffar is an effective scumbag.

20,000 years ago, during the last ice age, a teenage boy accompanied his father on a hunt for vital supplies and during a bison hunt had an accident and was feared dead. But he was very much alive, and about to make a new friend that would change the future of humanity. Alpha's a fine watch for the family, an exciting and beautiful looking history lesson that's enchantingly led by Kodi Smit-McPhee and Jóhannes Haukur Jóhannesson.

July 20th. 1969. One small step for man. One giant leap for mankind. Words spoken by Neil Armstrong as he set foot on the surface of the moon. First Man is the story of how he got there. First Man is a solid film, one that takes an intimate look at an epic story, zoning in on the man instead of the mission. That said the moon landing is awe inspiring but it's the cast led by Ryan Gosling and Claire Foy that make it really work.

Two American tourists ignore the warnings of locals and hike through the Yorkshire moors where they are attacked by something unnatural. An attack that has lingering effects. In my opinion this is the best horror comedy ever made. A film that gets the balance just right. The comedic aspects are riotous but the horror stuff is flat out terrifying. A brilliant movie with David Naughton and Jenny Agutter excellent as the leads.

In the near future (actually 2021, this was made in 2003) climate change has doomed Earth to a horrible ending and in the midst of it all two estranged people decide that their relationship is worth fighting for. Thomas Vinterberg brings the quirkiness of the Danish films he's famous for to his first English language film and while it's not entirely successful, it's always interesting. Claire Danes and Joaquin Phoenix head a cast stuffed with faces you'll recognise.

It's Wednesday night so it's time for a dose of Ken Loach realism™ with this story of a young woman and the effects the terrible decisions she makes have on her and her young son. 60's London on screen has always been flashy and exciting but here we see the dark side of it in all it's dingy, upsetting glory. You won't leave this one happy but you'll be glad you've watched it as Loach's humane approach to the story will stick with you. Carol White is a magnificent lead.

The story of John Merrick, a lovely & gentle man, despised by the society he grew up in because of the way he looked and Frederick Treves, the doctor who treated him like a human. David Lynch's justifiably lauded 1980 drama is a heartbreaking look at a life ruined by a birth defect. A terribly sad but strangely beautiful film. John Hurt in the lead role does career best work while Anthony Hopkins and Anne Bancroft excel in support.

The early 90's were a wicked time for action films and this is one of the most entertaining of the lot. Sylvester Stallone is in great form as a mountain rescue climber haunted by a past mistake who faces off against a team of murderous thieves who have crashed in the Rocky Mountains. Loads of nasty behaviour and crunchiness ensues. John Lithgow as the big bad is fantastically hammy and the scenery is lovely. What's not to like.

In crime ridden Jakarta, a cop goes undercover in a crime gang to bring down it's leaders and to root out the corrupt cops involved with them. If you like action films & haven't seen this I'm extremely jealous. 2.5 hours of unreal fights and stunts and thrills and spills. It's blisteringly violent and won't be for everyone but if you are able for it, it will blow you away. Iwo Uwais rocks the lead role and director Gareth Evans' ideas and visuals will amaze you.

A group of New Orleans tourists take a boat ride into the bayou in search of the legend of Victor Crowley. They get exactly what they are looking for and more aside. Ok, if you are anyway squeamish avoid this like the plague but if you like your horror movies gooey and rib tickling then this homage to all things 80's will hit the spot big time. Tamara Feldman and Joel Moore are fun as the main characters.