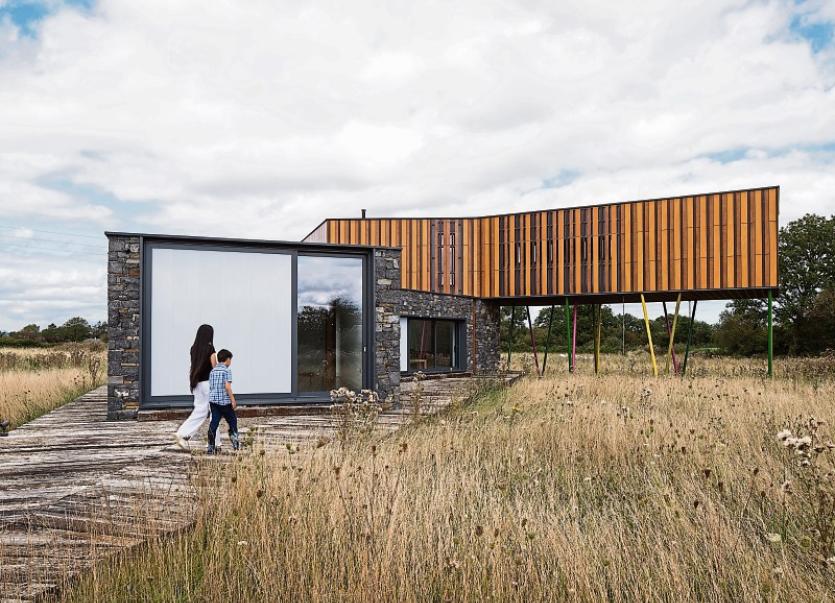 The house features natural stone on the ground floor while the first floor or ‘flying part’ is completed in strands of wood - a combination of oak and beech.Picture: Andrew Campion Photography

WHEN John Curran got a call from Dermot Bannon, he hadn’t a notion who the popular presenter was. Living outside Ireland for 26 years will do that to a man.

The call was in relation to Dermot’s news series of Incredible Homes and the request from the presenter was to feature John’s County Limerick home in one of the episodes.

“He is easy to talk to and I honestly can’t remember when they had the cameras switched on or off - it was just a continuous chat,” John told the Leader this week ahead of the broadcast of the episode this Sunday night.

In the new series, Dermot once again packs his bags and visits some of the most awe-inspiring houses around the world, Ireland included.  The film crew for the Incredible Homes show spent eight hours filming at John’s home at the end of September.

But just how did Dermot become aware of John’s County Limerick home?

“I think all roads lead back to the RIAI, the Royal Institute of the Architects of Ireland. They went to them. I think they went around looking at 80 different homes and shortlisted it down to four.”

John, who attended Roxborough Primary School and CBS Sexton Street, studied architecture at Bolton Street in Dublin or TU Dublin as it is now called.

He then spent 26 years abroad - 10 years in London and 16 years in Shanghai before returning home to build his dream house on a piece of land left to him by his late mother, Alice. It was Alice’s death in 2014 which spurred him to make the decision to return home.

“The house pays tribute to my mother, really,” said John.

“I have very fond memories of my mother’s association with this field and meadow. We had been based in Shanghai for 16 years. For me, a foreigner arriving there 16 years ago, it gave me a world of opportunities.”

John and his Chinese wife and business partner Liu Hai Ying still have an architectural practice in Shanghai and they continue to work remotely from their rural Limerick home.

Over the past 16 years, John Curran Architects has designed and realised over 700,000 m2 (seven and a half million square feet) of award-winning projects across China

“We have built lots of projects there. That’s where I met my wife and we have been planning for years to make a nest back here,” John explained.

“One of our boys Alex, 9, is here in Limerick with us and two of our boys Xia Bao, 14, and Tong, 18, are in Shanghai living with my mother-in-law,” he explained.

John grew up a stone’s throw from where the dream house is built, just south of Limerick Golf Club, at Lisnalty, Rosbrien, located four miles from the city on the road to Crecora.

Day 1 of 42 ...... here’s a glimpse of one of the #incrediblehomes from our Ireland episode this week to cheer you up #johncurranarchitects #limerick #meadowdance @rteone this Sunday

His wife Ying loves it here.

“Shanghai is great but it is like holding your breath. My wife loves the countryside and growing her own food. Here you can really exhale and we love the fact we are surrounded by nature.”

In terms of their dream home, John and Ying wanted to have “a very light touch and not to disrupt the landscape”.

“We are on the edge of a bog. We always had this notion in our head that we wanted the house to fly over the meadow. It appears to blossom out of the field with the colourful legs - it’s like a flower in a way. When you come from a city of 25 million people you are yearning for a bit of peace and quiet so when you enter inside it has the serenity of a small church.”

They used natural stone for the ground floor and the first floor or ‘flying part’ is completed in strands of wood - a combination of oak and beech.

Three bedrooms are located upstairs on the overhead wing while downstairs there is an open plan living room, kitchen and dining room.

“We were very happy with Limerick City and County Council. I was expecting there might be some push back from it but they didn’t - once you explain the story and that you are using natural materials,” John explained.

“It has been tested out by a few storms,” he smiled.

Construction started in late 2018 and was completed in August of 2019 - an eight month built. A lot of the structure was prefabricated and then assembled.

Along with John, Ying and Alex, there are three more residents on the property of the non human species! A conversation over a bottle of wine resulted in John adopting three alpacas from his brother in Lemonfield. They are named Dermot, Barry and Anna, in honour of Dermot Bannon and his crew.

Dermot Bannon’s Incredible Homes airs this Sunday, at 9.30pm on RTÉ One.