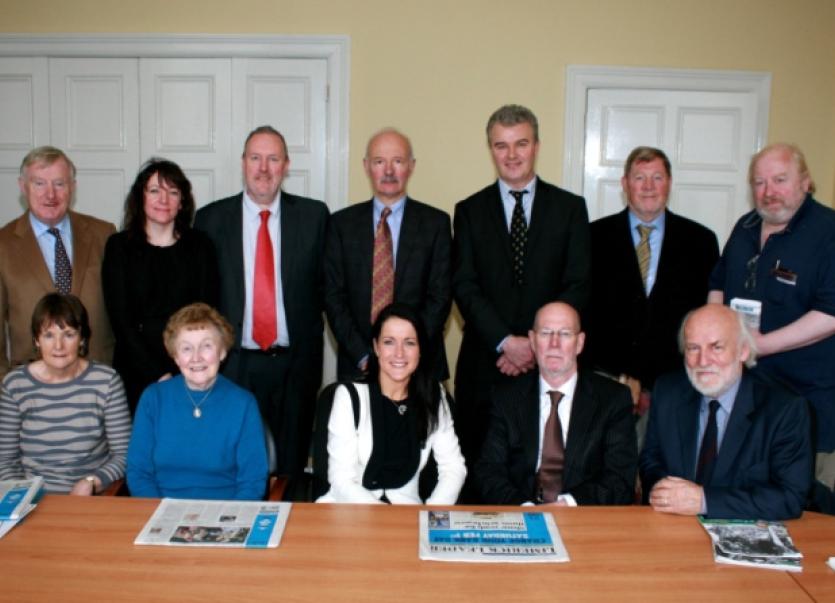 Members of the Press Council of Ireland and Press Ombudsman Prof John Horgan were briefed on the changing face of local newspapers when they toured the Limerick Leader offices as part of a day-long visit to the city recently.

Members of the Press Council of Ireland and Press Ombudsman Prof John Horgan were briefed on the changing face of local newspapers when they toured the Limerick Leader offices as part of a day-long visit to the city recently.

They were given a tour of the offices by editor Alan English before being welcomed by managing director Irene Hamilton, who said she was delighted to host them in Limerick.

During the visit, the council members discussed a number of the issues surrounding local newspapers at present, including the growing importance of online publishing, handling complaints from readers and the challenges of attracting younger readers.

Prof Horgan said they were delighted to be in Limerick and congratulated the Leader on running “a very good operation”.

He added that a good local paper “is virtually indispensable”.

“You’d be surprised at the number of national newspaper journalists who still harbour a desire to edit a local newspaper because there is still something very authentic and heartwarming about a good local newspaper,” he said.

Asked about the low level of complaints to the Press Council about regional papers - making up just 3.9% of all complaints in 2012 - he attributed this to the fact that local papers were “very close to their readers”.

“You get one name wrong in a regional newspaper and everybody in the parish, if not the county, will know about it so they just have to have a reputation for authority, reliability and truthfulness,” he said.

“If you can walk in the door and if you can’t see the editor, then you can see someone fairly close to him, and things that go wrong can be put right. Interestingly enough, we are having this more frequently with national papers where a lot of national paper complaints are being handled informally by editors so that people don’t get down into the trenches and start trench warfare.”

Editor Alan English said he was delighted to welcome the Press Council to Limerick.

“There was a real sense that they were very interested in the work we do here and in particular they were intrigued by the Leader’s archive,” he added.

Following the visit, the council members attended a seminar in the Savoy Hotel where the keynote address, on the topic of press regulation in the rapidly changing media industry, was given by Lara Fielden, Reuters Institute for the Study of Journalism, Oxford.

There was also a discussion on the future of online journalism with contributions from Hugh Linehan, digital development editor of The Irish Times, Susan Daly of TheJournal.ie, Ronan Price of Independent News & Media and Dolan O’Hagan of Examiner.ie

Meanwhile this week, the Press Council published a new handbook setting out, in practical terms and in accessible language, the operation of the Code of Practice for Newspapers and Magazines.

Written by journalists and editors themselves, the new handbook outlines the professional practice in journalism to which all member publications have committed themselves.