Nationwide to focus on a Giant year for culture in Limerick 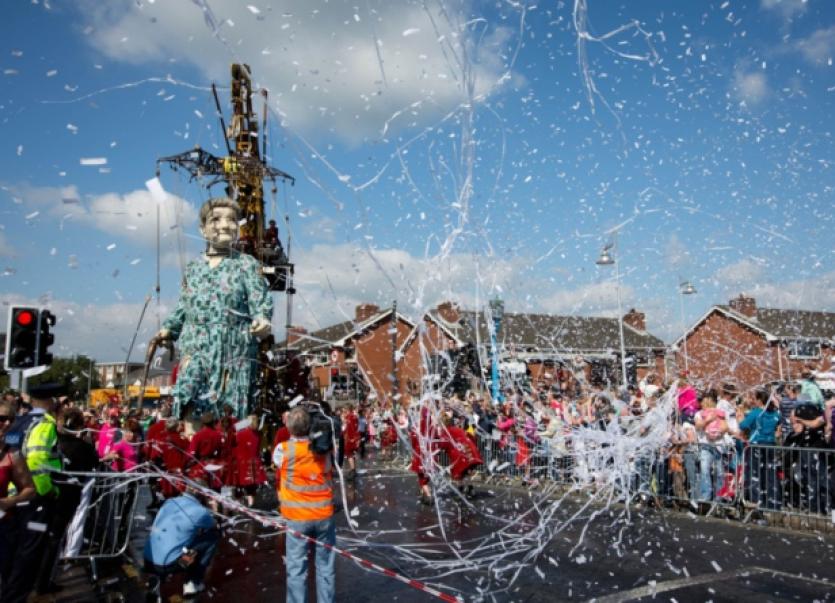 LIMERICK’S stint as City of Culture in 2014 will get the full programme treatment from RTE’s Nationwide this week.

LIMERICK’S stint as City of Culture in 2014 will get the full programme treatment from RTE’s Nationwide this week.

The half hour episode will air on Wednesday night and focus exclusively on the year of culture.

Several projects, from the Craft Hub right up to the Park Kiosk event and the Big City Portrait film screening that took place in December, will feature, as will interviews with key protagonists.

The focus comes just days after the year ended and as the drive towards the European Capital of Culture status in 2020 begins, and was welcomed by arts officer Sheila Deegan, who worked extensively on City of Culture.

“Nationwide have been fantastic, they have been good to cover the year - lots of things will feature in this programme,” she said, noting that TG4 are also to feature the year in an upcoming 50 minute programme, Lumen i Luimneach on January 16, which will feature the final concert that took place St Mary’s Cathedral in December.

“It is nice to get the coverage, and they will both be nice records of the year. The concert was a moment of calm, so it will be nice to reflect on that.”

Among those interviewed for Nationwide were Pat Cox and Mike Fitzpatrick, chairman and director of City of Culture respectively, and a group styling themselves as the Culture Club, eight friends who each decided to see one cultural event every month during the year.

The programme was produced by Matt Kelly, based in Pallaskenry, and presented by Limerick reporter Marian Malone, who visited many of the exhibitions, installations and dramatic presentations for the programme.

“The programme of events was vast, right up to the dying days of 2014 and the legacy of 2014 is also looked at,” she explained.

“The programme also looks back at some of the headline events of the year, especially the Giant Granny, whom Limerick people appear to have taken to their hearts,” she added.