Limerick TDs gets the message about importance of local newspapers 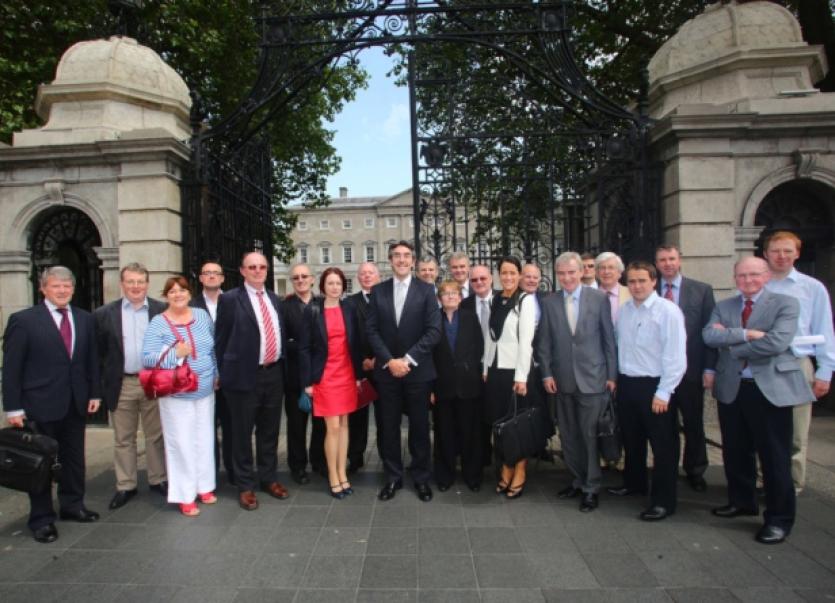 Editors and MDs from the leading local newspapers of record around Ireland travelled to Leinster House to discuss the importance of local press and journalism.

Editors and MDs from the leading local newspapers of record around Ireland travelled to Leinster House to discuss the importance of local press and journalism.

The message we delivered is also relevant beyond the gates of the Oireachtas.

In a nutshell, it was this: local newspapers that take pride in being the paper of record for their communities should not be taken for granted. Like any other business, we need to be supported in order to stay vibrant.

From the Leader’s perspective, it was good to see a healthy Limerick turnout for the presentation by the Regional Newspaper and Printers Association of Ireland (RNPAI).

Local TDs Dan Neville, Willie O’Dea and Patrick O’Donovan, and Senator James Heffernan were among more than 70 Oireachtas members in the audience. Dail business detained Jan O’Sullivan, Kieran O’Donnell and Niall Collins, but I was glad to speak with them separately, while Michael Noonan sent his apologies – trying to put the nation back on its feet is a pretty decent excuse, in fairness.

Both locally and nationally, Oireachtas members recognise the role of newspapers of record like this one as a platform for local democracy.

I was honoured to speak on behalf of the many editors present. I made the point that, like members of the Oireachtas who occupy the seats once taken by politicians long retired, we editors are only passing through. The papers we are privileged to edit are what matter and nobody should assume that they are indestructible, just because they’ve been around for generations.

At the Leader we’re proud that anyone wishing to find – say 200 years from now – a detailed record of what was going on all over in Limerick during the year 2013 will have no better resource than this newspaper.

That in-depth coverage does not come cheap. We have more journalists at the Leader than all the other media operations based here put together.

To keep doing our job in a fast-changing environment, we need recognition for the importance of what we do. We need readers to fund that commitment to covering the community – and to promoting transparency and accountability – by buying our papers. And politicians present were reminded that they can do their bit, too.

The president of the RPNAI , Sean Mahon – who is managing director of the Southern Star in Skibbereen – explained that newspapers are evolving as media businesses.

“We are not just producing papers of record but also websites of record as well, expanding our reach and our interaction with local readers,” he said. Sean spoke of the challenges facing the industry, such as the decline in advertising revenue due to the closure of many small businesses and called for a fairer division of government advertising revenue to local newspapers.

Sean also discussed the knock-on effect for local newspapers of the RTE dual model of funding which he said was distorting the market. “RTE is now producing a very rich website using its television and radio content to attract a big audience,” he said.

“But they also carry national advertising and operate commercial partnerships with classified websites. National brand advertising is a key revenue stream for local newspapers both via our print titles and, increasingly, our digital operations and therefore it makes it harder for us to compete when the playing field isn’t level” he added.

“Local newspapers are fuelling the nation’s conversation,” Johnny O’Hanlon, director of the RPNAI, told the audience, adding that 76% of households regularly buy their weekly local newspaper.

He also stressed that to do their job well, local papers need all the revenue they can get, including government-sponsored advertising.

At Leader we’re forever grateful for the support of our readers and advertisers. Every week, that support allows us to continue providing a quality paper that can fulfil an important role today – and be relied on by future generations.

“In years to come, if you want to know what happened in Limerick on June 26 2013, you can go back through the archives of the Limerick Leader,” Mr English told the meeting.

“If the local newspaper is not around to preserve the message, it will be lost forever.”

Mr English went on to compare the role of local journalists and rural politicians.

“There is a parallel between a good local reporter and the work of a good TD; you do a lot of things that are unseen and you do things that apply to only a small section of your communities, yet it is important. It is important because politics matters and local newspapers matter.”

He warned Oireachtas members not to take their local papers for granted.

“There is a perception that local newspapers are bulletproof and that they are institutions that will always be around but that is not the case,” he stated, adding that the local papers needed their support.