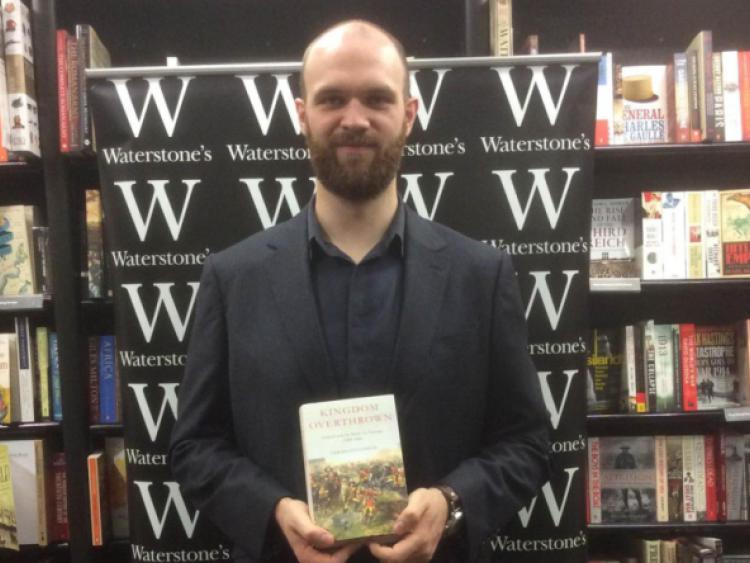 LIMERICK’S next literary star –albeit now living in the Rebel county – walked away with a book deal after less than a two-week search.

LIMERICK’S next literary star –albeit now living in the Rebel county – walked away with a book deal after less than a two-week search.

While the struggles of authors to get published are well documented - the multiple award-winning Donal Ryan received 47 rejections for his first book – the deal came relatively easy for Gerard Fitzgibbon, whose roots are in West Limerick.

Entitled Kingdom Overthrown: Ireland and the Battle for Europe 1688-1691, the 389-page, 120,000 word tome is set at the “crossroads of history” and an often overlooked period in the field of Irish historical literature, which he notes has an over-zealous thirst for the Revolutionary period. Dramatic events in Limerick feature strongly.

While the bookshelves groan with accounts of 1916 and the War of Independence, Ger turned his attention to another critical juncture in Irish history centred on a “short war, where there was so much at stake”.

It is not, he says, an “old fashioned academic history book”, as there is very much a narrative in terms of plot, pacing and development. His love of history was born when his father gave him an old storybook of Greek legends, and the idea to him that “bizarre and marvellous things might live in the past” was what first kindled his love of history.

Aged 13, his family moved from England, where he was born, to Dromcollogher. He began to look at history through a different lens in a much different setting. “Sitting in a new school and opening a new textbook,” he writes, “I found a strange story staring back at me. History, I was now told, actually began with Parnell, the Home Rule movement, and Ireland’s final fight for independence. England was no longer a proud old dame, but a tyrant. I read and listened, but it took a while to fully understand. Every nation teaches its children the story of how it won.”

Ger’s love affair with history continued to 54 O’Connell Street and the offices of the Limerick Leader, where he said the “genesis of the book was born” and where as a reporter he “sought the human within every story”.

His love of feature writing and the constant honing of that craft - which led to him win Ireland’s Young Journalist of the Year award in 2009 - is very evident in Kingdom Overthrown, and he says were it not for the Leader he may not have been able to write it as he did.

“I was confident in my ability to write and frame a story, but I had to pour my head into these books for months to familiarise myself with the period before I could start writing.”

Each of the chapters are short, snappy, succinct and succeed in sucking the reader in to the lives of those who fought in the Williamite wars, which are based on first hand accounts of soldiers and officers in both armies, collected from manuscript collections, correspondence and personal memoirs. It is, says the publisher, a human account of one of the most destructive wars ever fought on the island of Ireland.

Behind every great writer is usually an attentive editor, and Ger says he’s lucky to have found two within a decade. He noted that Alan English, the Leader’s editor, “taught me the valuable lesson that sometimes a writer just needs to get out of the way.” He found the same with his publishers, who chopped some 20,000 off the final draft to quicken the narrative pace.

After leaving the Leader to take a gamble on what could have been his “forgotten dream”, Ger sent himself off to start writing, without the deadlines and structure of a newspaper environment, and eventually found a new routine – in that there is no set routine. “I had to follow my heart. It was the natural thing for me to do. There were weeks where I didn’t want to look at it,” he admits, “then other days where I had to tear himself away. Sitting down to write every day, it’s easy to feel like you’ve done a long day’s work but not a good day’s work. My advice to anyone is just sit down and write it.”

After submitting just three sample chapters and a brief pitch, Ger received the phone call that every writer dreams of. “I was lucky that New Island got on to me within less than two weeks and the commissioning editor asked me to come up to Dublin. It was pretty much commissioned from the off. There is always this sense as a writer ‘Am I doing something that’s worth doing?’ But they were always there for me; I can’t say enough about them.”

Ger says he had been an “enthusiastic amateur but not a scholar of the period.” That is now changing. Further historical novels are afield, and he’s also hoping to do a PhD in history in the coming years.

“The most important thing for me is how it’s received – the goal I set out to achieve and how close I got to it, what people take away from this period and this story, not the level of sales.”

Kingdom Overthrown: Ireland and the Battle for Europe 1688-1691 by Gerard Fitzgibbon is available now in all good bookshops