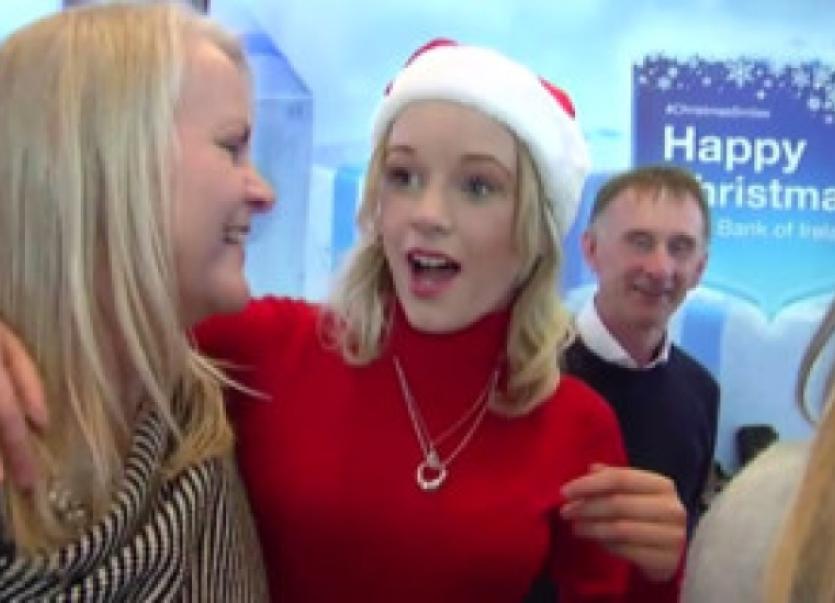 A SURPRISE welcome home reception for a Limerick girl on her return from Australia has gone viral and is on its way to becoming a social media hit.

A SURPRISE welcome home reception for a Limerick girl on her return from Australia has gone viral and is on its way to becoming a social media hit.

The O’Connor family from Kilcolman organised a very special homecoming surprise for daughter Carmel who was coming home for Christmas for the first time in four years.

Dad Donie, mum Dypmna, sisters Jennifer and Donna and brother Jack were all in Dublin Airport to greet Carmel when she arrived, but as a special treat, they had also organised for up-and-coming band Draiocht - of which Jack is a member - to be on hand to greet her with some traditional music.

Also waiting to meet her aunt for the very first time was Donna’s 14-month-old baby girl, Katie, who wasn’t yet born the last time Carmel was home.

Dublin Airport arranged for a camera crew to record the event and the video of Carmel’s arrival - and her delighted reaction - has since gone viral on social media, registering almost 70,000 hits on YouTube since it was uploaded on Monday.

“It was absolutely brilliant,” said Carmel of her reception and the subsequent online response.

“Never in a million years would I have thought that it would have gone like this, but it’s great to have a bit of happiness going around, rather than all the doom and gloom.”

And Carmel had a surprise of her own for her loving family. After four years in Australia, she announced - on camera - that she wasn’t going back and that she was going to stay in Ireland.

Unsurprisingly, the news was greeted with delight by her parents, sisters and brother.

“Christmas is very special in this house and Carmel hadn’t been home for four years so it’s going to be great to have the whole gang back home for Christmas,” Donie said.