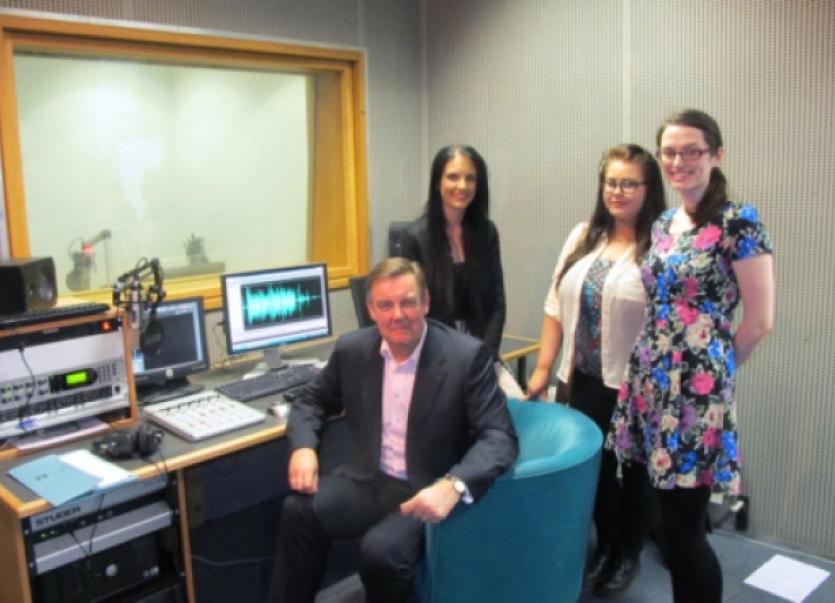 RTE Six One anchor Bryan Dobson last week visited University of Limerick where he shared his experiences of being involved in broadcast journalism for over 30 years with student journalists.

RTE Six One anchor Bryan Dobson last week visited University of Limerick where he shared his experiences of being involved in broadcast journalism for over 30 years with student journalists.

Despite reportedly being a little nervous and not knowing what to expect from a newsroom of aspiring young journalists, he nevertheless enhanced their knowledge of the ever changing profession that is journalism in 21st century Ireland.

Having begun his broadcast career in an unlicensed radio station in the mid-Eighties Mr Dobson moved north to work for the BBC before returning south to RTE where he has risen to lead the station’s news coverage.

Though he might have been a touch apprehensive coming down to UL, the aspiring journalists were also nervous with such a high profile TV personality in their midst. The atmosphere, however, was very relaxed as Bryan took off his jacket and settled in for an informal chat about how broadcasting functions as a medium today.

His audience asked a number of questions, following the talk which continued for well over an hour.

How scripts are written and kept short and to the point was conveyed by relevant examples from the archives of the Six One news and the professional work carried out daily by RTE’s seasoned staff.

Mr Dobson shared his experience for better or worse, including mistakes made and lessons learnt along the way; nothing was held back and the newsman shared freely his rich knowledge of modern broadcast journalism for discerning viewers and listeners alike.

Following the talk in UL’s newsroom some had the added privilege of going to UL’s designated radio room for a broadcasting master class.

For those who availed of the experience this was to prove very helpful as the RTE veteran took delight in helping others to achieve their own goals and dreams of someday being behind the mic on a professional basis.

All those who attended expressed heartfelt thanks to Mr Dobson for his very practical input into their lives; very shortly they will each head out into the “real world”.

Experience gained was passed on in UL and all who were there are the richer for it.

Tom Felle senior lecturer in journalism who had brought Mr Dobson down told the class afterwards: “The fact that the room was full was a great endorsement, and he asked me to say he was really impressed with the level of questioning. He told me just before he went in that he was really nervous! I thought he was excellent, and he was spectacularly good in the broadcasting master class afterwards.”