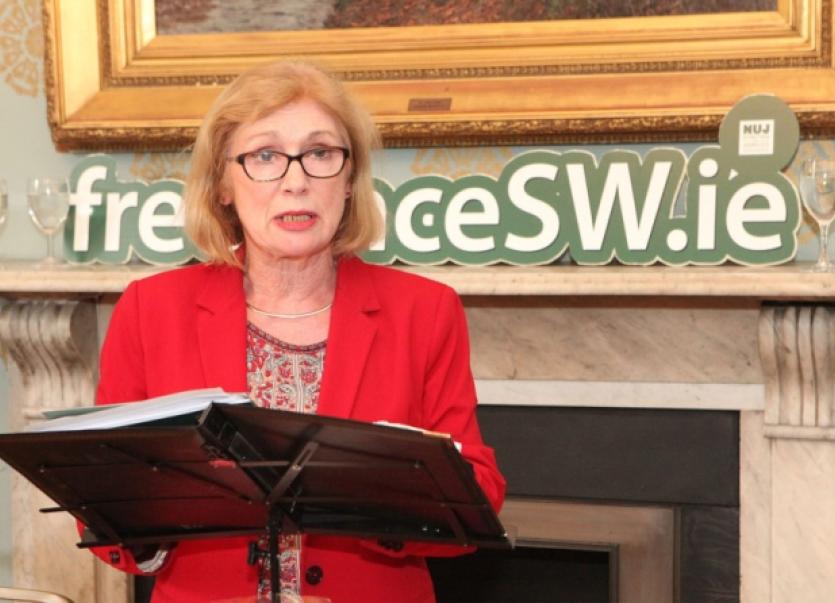 There is a “bright future” for journalism in Ireland but maintaining public trust will be crucial to the future of the newspaper industry, the Minister of Education and Skills, Jan O’Sullivan has said.

There is a “bright future” for journalism in Ireland but maintaining public trust will be crucial to the future of the newspaper industry, the Minister of Education and Skills, Jan O’Sullivan has said.

The Limerick TD was speaking at the recent launch of a new online freelance directory produced by the South West Branch of the National Union of Journalists (NUJ) in Culture House. The directory FreelanceSW.ie contains a listing of freelance journalists and photographers who are members of the NUJ in the South-West region.

Minister O’Sullivan added: “There is no way that the good ethical journalist, who is a member of the NUJ will be replaced. There will never be a replacement for that quality and that standard. In Ireland, there is a strong reliance on and a strong commitment to a media that is fair and allows people to make their own judgements.”

She acknowledged however that the traditional media business had gone through a “perfect storm” in recent years as a result of falling advertising revenue, slipping readership figures and major technological changes in how people consume news.

“There is no escaping that fact, and while economic recovery will see some ground being made back, it is clear that the media industry will forever be changed by technology,” Minister O’Sullivan said.

As the daughter of an “ink for blood” newspaper man - former Limerick Leader journalist Ted Gale - she admitted she had been somewhat saddened by the shift to online news consumption.

“I grew up in a house where the newspaper was as essential and as necessary as the bottle of milk or the good biscuits when the relatives visited.

“The newspaper was trusted, informing and entertaining. Indeed there was a stability and rootedness about the physical copy of a newspaper that I thought could never be shaken. But shaken it has been.”

However, the minister stressed that the local newspaper network remained a popular and influential medium.

“One of the great attributes of newspapers has been trust. You trust the journalists, the editorial team, the culture of a news organisation.

“As more and more information become available, I strongly believe that the issue of trust will again become central for consumers of news.

“That is why there is a bright future for journalism in Ireland. The skills of professional, ethical journalists and photographers, such as those represented by the National Union of Journalists, should not be outsourced or replaced by an app.”

Seamus Dooley, Irish secretary of the NUJ, also spoke at the launch. He praised Minister O’Sullivan’s colleague, Minister for Communications Alex White, for his work in drawing up guidelines on media mergers on Ireland.

However, he pointed out that this did not have retrospective powers and he called for the establishment of a commission on the future of media in Ireland.

“There are many threats to public interest journalism, including the lack of media diversity in terms of ownership and editorial content, the absence of in-service training programmes in most Irish media organisations, the reliance on cheap or free labour and the growing threat to union organisation and the undermining of collective bargaining.”

“We seek such a commission because concentration of ownership directly influences the media landscape and the news we receive - and do not receive - every day,” he said.

Mr Dooley praised the South-West branch of the NUJ for its “timely initiative” in developing the freelance directory, pointing out that the branch had a long history of service to its freelance members.