Mayor of Limerick ‘hopeful’ of agreement on big screen 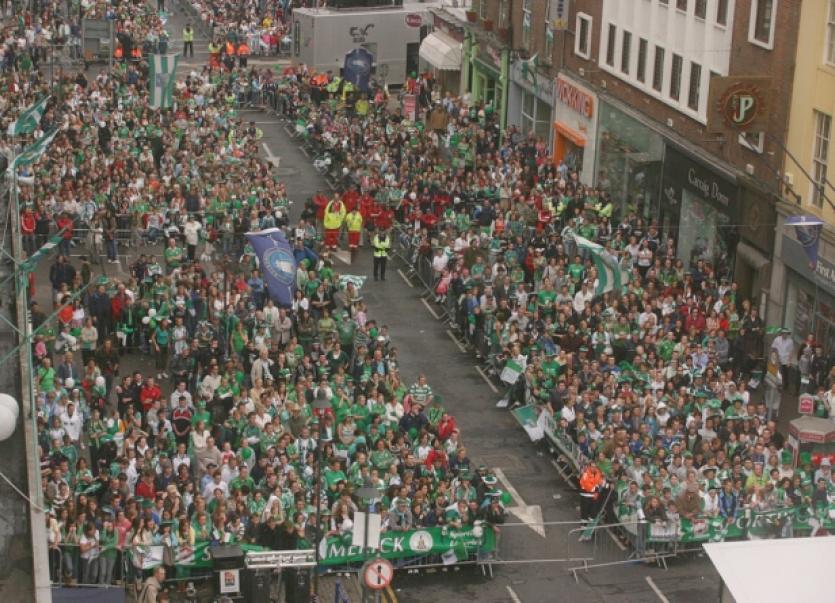 The Mayor of Limerick is ‘hopeful’ that plans to put up a big screen on O’Connell Street to show the Munster Hurling Final will still go ahead.

The Mayor of Limerick is ‘hopeful’ that plans to put up a big screen on O’Connell Street to show the Munster Hurling Final will still go ahead.

However, Mayor Michael Sheahan has admitted that there are no finalised plans as of yet to erect a screen in the city to broadcast the clash between Limerick and Cork.

“There are no new developments. There will be no final decision until Monday evening”, Mayor Sheahan said.

“All of the interested parties all talking through me,” he confirmed. “We are trying to get our ducks in a row with regards to a financial package”.

It appears that money is the only obstacle to the planned public viewing of Sunday’s game. However, the Mayor dismissed claims that the plan is unlikely to go ahead.

“No, it is not unlikely. I would be very hopeful that the plan (to put up a big screen) will go ahead.”

The possibility of the game being shown in the Gaelic Grounds was always an unlikely occurrence, according to County Board sources.

Many Limerick fans are set to miss out as the County Board only received approximately 11,500 tickets to distribute to clubs for Sunday’s match with Cork.

The biggest allocation received by a Limerick club is under 150 tickets with some Limericks clubs getting less than 80 tickets.

Meanwhile, it was announced last week that the minor decider between reigning champions Limerick and All-Ireland champions Waterford will not be televised.

Limerick GAA officials had hoped that TG4 would broadcast the minor decider.

However, that game clashes with the Connacht SFC final which is being shown on RTE and due to broadcasting rights, two channels can not show matches at the same time.

For those who do have tickets Iarnrod Eireann have added an extra direct train for supporters going to the Munster Senior Hurling Final in Cork this weekend.

The rail company have the direct train leaving Limerick at 11am. The return train leaves Cork at 7.10pm and is due back in Limerick at 8.40pm.

There are also trains going from Limerick Junction and Charleville. Details of these can be found on www.irishrail.ie.

The company are also offering a special on-line booking fare of €9.99.

Supporters travelling by rail are reminded that alcohol and glass bottles are not permitted on the train.

Limerick travel to Cork looking to retain the Munster title for the first time since 1981. The match will be live on RTE television and Live 95FM.