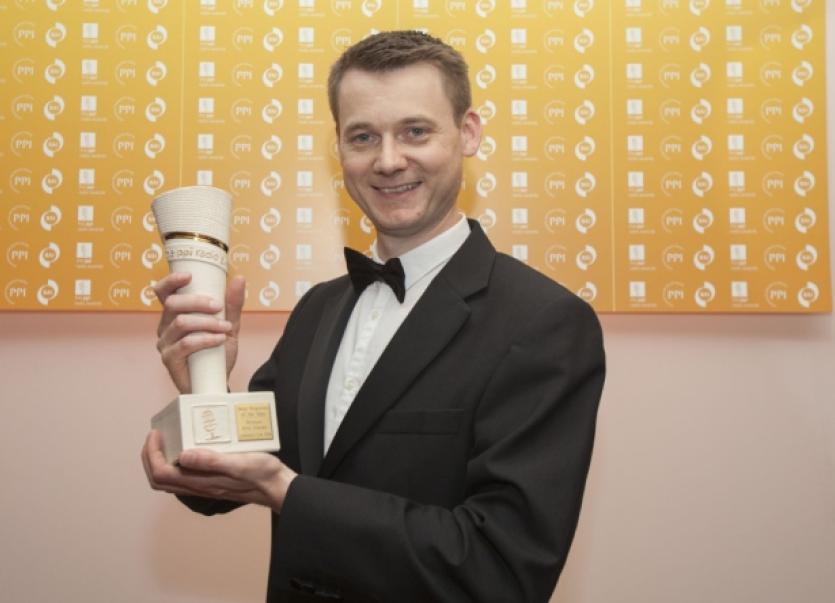 RESPECTED radio reporter Eric Clarke prides himself on broadcasting news ‘scoops’ to the masses, but last weekend he was the one making the headlines.

RESPECTED radio reporter Eric Clarke prides himself on broadcasting news ‘scoops’ to the masses, but last weekend he was the one making the headlines.

The Pallaskenry native, who has worked with Limerick’s Live 95FM for seven years, was awarded news reporter of the year at the prestigious PPI awards ceremony in Kilkenny in front of 700 guests drawn from local, regional and national radio stations across the country.

It was his second time being nominated for the honour, having previously been shortlisted two years ago, but this time he won gold, and brought home the trophy, after beating off stiff competition from two RTE Radio One reporters, and others from around the country.

“I was absolutely delighted and very honoured. It’s an enormous achievement, and it’s fantastic to be recognised for the work that we do,” he told the Limerick Leader.

Eric, who is currently filling talk-show host Joe Nash’s hot-seat for a number of weeks, submitted his entry based upon compilations of some of Limerick’s biggest stories from June of last year up to this May.

Grey Heron Media, a media production firm based in Kilfinane, won a second gold award this year, for its radio documentary, Take No More, based on the dramatic events at Kilfinane National School in November last year.

Also shortlisted in this category were two other Limerick-based documentaries - Spin South West’s Re:Generation and Live 95FM’s The Sinking of the Plassey. The media firm earlier scooped an award in New York. Eoghain Fitz of Spin South West also won best DJ at the PPIs, regarded as ‘the Oscars of the radio industry; beating off competition from Beat 103-103, and Q102.

Eoghain broadcasts SPIN Hits from 14.45 to 18.45pm every Monday to Friday and has been on air with the station since it first began broadcasting in 2007. Originally from Kildimo, Co Limerick, he began his broadcasting career in Wired FM, when he was a student in LIT and also worked on West Limerick Community Radio before he began as part time presenter at the launch of SPIN South West in 2007.