Noelle shows journalistic flair at the tender age of 10 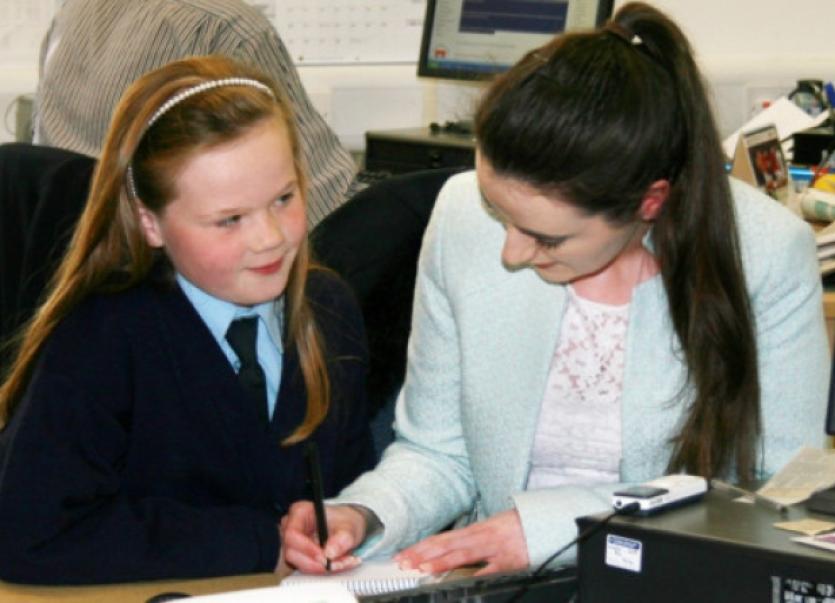 SHE may only be 10 years of age but Askeaton’s Noelle O’Shaughnessy knows exactly what she wants to be when she grows up – a journalist.

SHE may only be 10 years of age but Askeaton’s Noelle O’Shaughnessy knows exactly what she wants to be when she grows up – a journalist.

The fourth class student of Foynes National School beat off the challenge of 27 other pupils from her own class, and fifth class, to be named the winner of the school competition, writing an essay called Why I want to be a Journalist.

“Miss Doran, my teacher, told me I had won and then Alan [the Leader editor] rang my mother about coming in here,” Noelle explained during her visit to the newspaper’s offices in the city this week with her mum, Kathleen.

The idea for the competition was hatched when former Limerick Leader news editor Jimmy Woulfe – who was covering the visit of Minister for Transport, Tourism and Sport, Leo Varadkar, to Foynes in February – called into the school.

The pupils were asked to write a short piece about why they would want to be a journalist.

In her submission, young Noelle first explained that she loves writing.

“At the moment, I’m writing a book called Lyla’s Trip to New York,” she wrote.

“I would also like to experience going around the country and seeing all the different places. I’d like to see all the exciting news stories and actually be at the scene when stories are happening,” she continued.

The Barrigone girl who has one sister, Caitlin, 11, and two brothers – Conor, 7, and Todd, 3, loves reading newspapers – “even if they’re a bit sad sometimes”.

In her prize-winning essay, Noelle also writes: I think writing is like a big bubble that is inside my head and I spill it out onto a page.

“When I’m older, I’m going to walk into that college, pass those exams and be that journalist that I’m meant to be,” concluded the ambitious Askeaton girl.

Alan English, the Limerick Leader editor, said: “It’s very obvious that Noelle has the potential to be a very good journalist in the future.

“When she came to the Leader office she was very interested to see all the old bound volumes of newspapers going back more than 100 years. A lot of great journalists have worked for the Limerick Leader over the years and there’s no reason why Noelle couldn’t join them at some stage.

“Her essay showed some excellent writing ability and also the determination needed to make it as a journalist. Well done, Noelle!”