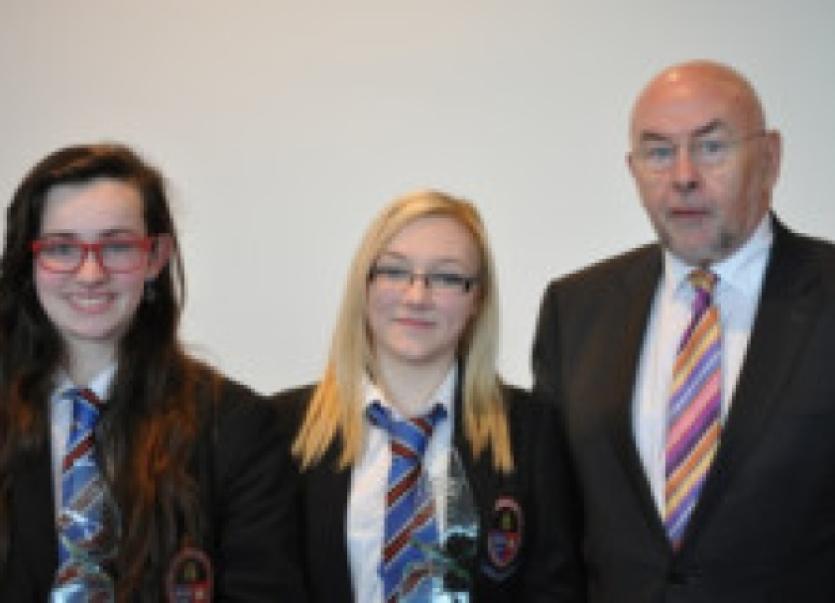 Two students from Colaiste Chiarain, Croom have won awards for their journalism in a prestigious national competition run by the National Newspapers of Ireland (NNI) organisation.

Two students from Colaiste Chiarain, Croom have won awards for their journalism in a prestigious national competition run by the National Newspapers of Ireland (NNI) organisation.

Emily O’Grady from Fedamore won top prize in the Features section, while Christina Enright from Adare came third in the Opinion section of the competition, which was open to all transition year students.

Emily’s entry, entitled Talk To Joe, explored the sometimes awkward and difficult subject of celebrity interviews. In awarding her the top prize, the judges described her story as “instantly printable”. “The subject matter, the editing, the clever journey that the writer takes the reader on and her extremely mature grasp of grammar, punctuation and how to tell a story left us in no doubt that she is the deserving winner of this category,” they said.

Christina’s entry, addressing the teaching of Irish, was described as a “mature confident article that should be read by every educator in Ireland”.

The girls were accompanied by their teacher Colm Hanley, at the award ceremony in the National Convention Centre in Dublin.

This is the second year that NNI has run the Press Pass initiative, this year with the support of the Irish League of Credit Unions. In autumn 2013, 300 registered schools received 16 national newspapers and their local newspapers over a two-week period. In addition, each student registered with NNI Press Pass received a specially created guidebook, which aimed to encourage students to improve their literacy skills, analyse newspaper content and create their own content. The entire programme was provided completely free of charge.