Then & Now: From Dresden to Dromcollogher 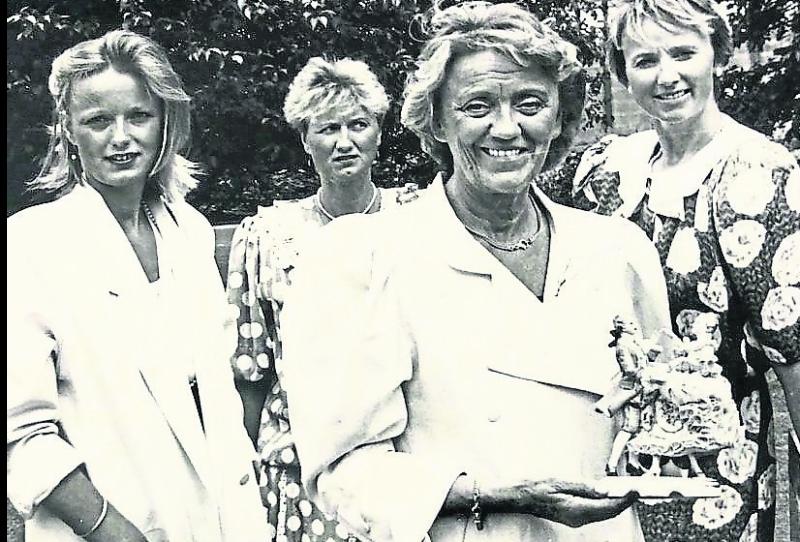 Johanna Saar, pictured front with her three daughters after winning the International Veuve Clicquot Award for Business Women of the Year 1987

IRISH DRESDEN celebrates its 60th anniversary this year and a year since the passing of its founder Johanna Saar, it's time to cast our minds back to how it all came about.

Johanna Saar was a remarkably kind and industrious German lady who enjoyed a long lasting association with the town of Dromcollogher on the Limerick border with Cork.

The founder of Irish Dresden moved to Limerick with her family in 1962, and her drive and determination put the town on the international map. At its peak, the firm employed up to 70 highly skilled people handcrafting beautiful porcelain figurines and gift wear which they exported across the globe.

Johanna and her husband Oskar arrived in 1962 to establish their unique hand laced crafted porcelain family business which could trace its origins back to (founder Anton Muller), the early 18th century and the German state of Thuringen.

Irish Dresden, formerly Müller Volkstedt, was established 1907 in Thuringia, in a region known as the green heart of Germany. Up until the outbreak of the second world war the business which employed 100 people was thriving and had earned a reputation worldwide as one of Germany's finest porcelain companies.

The factory was destroyed in 1945 by American forces during the war but the old master moulds were undamaged in the cellars.

The factory was rebuilt, and production continued in the town until the Russian occupation in 1950. This forced the family to escape and cross the border as refugees into West Germany. They set up business in a small town on the edge of the Black Forest, and continued to produce their goods for another decade, before shortage of labour was a main reason for moving to Ireland.

How they came to Dromcollogher and set up in business is well worth recording.

The Dromcollogher Muintir na Tire Guild was set up in the 1950s to halt emigration and to attract industry to the famous town close to the Cork border. Dromcollogher was one of the starting points for the Irish Co-op Movement, with the first Co-operative creamery being set up here in 1889 on the initiative of Horace Plunkett.

The listed building has since been restored and is now the National Dairy Co-operative Museum.

The Guild's first endeavour was to examine the possibility of getting a new industry for the parish. It began by making a survey of the district within a radius of six miles of Dromcollogher.

The purpose of this was to discover the amount of labour available. It also gathered other relevant information that would attract a prospective industrialist. All this information was included in a brochure.

An advertisement was inserted in the most widely read German paper Die Weld. This produced numerous enquiries, and in reply to each of them, a copy of their brochure and a map of Ireland was sent. The result was disappointing, but help came from Diarmuid O'Riordan of Askeaton, who put them in touch with Herr Oskar Saar a German industrialist who was anxious to transfer his porcelain factory to Ireland.

It had become impossible for him to carry on this old fashioned business because of labour shortage in Germany, and he was prepared to transfer all his mould patterns (£12,000 worth) to an Irish company.

His factory had been producing porcelain figurines of the well known Dresden type for over seventy years. This was just the kind of industry the people of Dromcollogher had been hoping for. A handicraft requiring skill which could be developed in a rural area, and a factory which required none of the amenities and natural advantages which was not available there. They accepted Mr Saar's offer and set about the formation of the Porcelain Products Ltd to carry on in the tradition of the old German industry.

The establishment of a new company is expensive and involved a great deal of work. Fortunately, they had the co-operation of the local community who subscribed a large amount of capital.

They received great assistance from the Industrial Development Authority, so they were able to obtain the usual Government grants. The County Limerick Vocational Education Committee came to their aid later by paying the salaries of two German technicians during the preliminary training period.

The immense amount of work done by John Galvin who was the secretary at the time deserved special mention also for the part he played.

The training period started in September 1962, in the old National School, which proved unsuitable, and early in the following year they moved to the Parochial Hall. In the meantime, the building of a new factory was begun, and they were able to transfer to it in the following June. They selected 35 workers who had made the grade in the training school, went into production on a small scale.

It took the workers a while to master the craft and gain the experience necessary to attain the quality needed. The skill took three years to learn and in Germany was subject to examination.

In 1965 it became necessary to face the purchase of a larger kiln to deal with increased output, and the erection of an extension to the factory because of lack of storage space. Even with Government grants these were expensive, but they were made possible by an increase in production. The company also experienced transport problems with delays in imports of raw material and exports of their goods.

The seamen's strike in Britain had a bad effect on the tourist trade, resulting in a fall in their home market sales. The bank strike and the credit squeeze also made it difficult to collect the money due to them.

C.I.E. arranged to have one of their Coach Tours call at the factory once a week during the summer months. The 25 to 40 visitors each Wednesday afternoon for one hour were taken on a tour of the factory and given a cup of tea afterwards.

It was a profitable venture, and the free advertisement also helped to make their name known. The company sold thousands of pounds worth of their products to customers in Ireland, England, France, Germany, Holland, Sweden, USA, Canada and Australia.

After four years of hard work the company had made their mark in Dromcollogher, employing 35 young people to make a living in their hometown.

American visitors in particular brought a lot of business to the factory over the years. They also had special occasion sales which allowed the public to buy one off items, and their gift shop was an added attraction.

The sad part of the story was that Oskar died suddenly of a heart attack in 1968.

Johanna, and her daughters continued the business. Sabina as production manager, Cornalia as marketing manager, Angelika as a gifted painter and Suzy who ran the White Gold gift shop in Limerick.

I will conclude the story in the next column.