Then and Now: Who was to blame for the deaths of 48 people in tragic cinema fire? 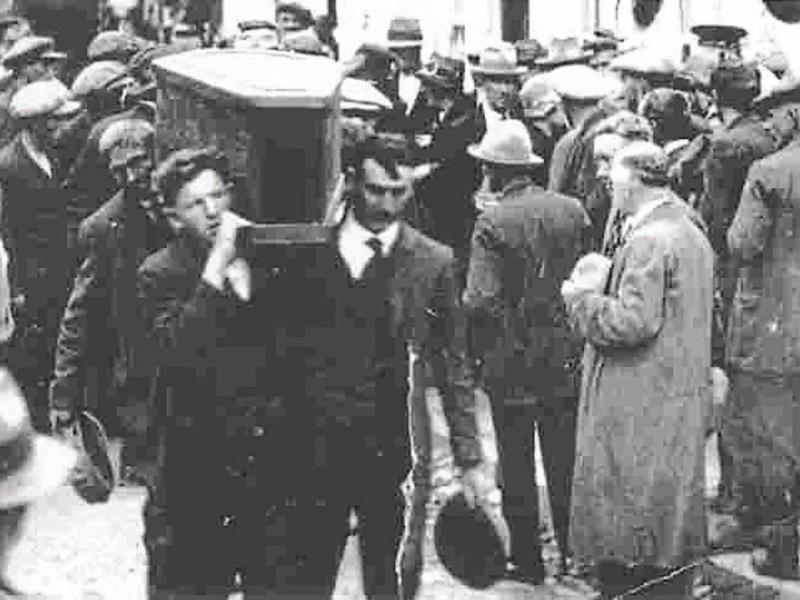 DROMCOLLOGHER CINEMA fire continues: The inquest was held eight days later in Dromcollogher, and the jury returned a verdict, that the victims had died from asphyxiation and burning.

Forde and Downing were arrested and sent forward with the store owner Patrick Brennan, for trial on charges of manslaughter.

Then & Now: Everyone knew someone who died in tragic cinema fire...

At the Central Criminal Court in Dublin, five months later, Brennan, was acquitted and the jury failed to agree in the other two cases, and Forde and Downing were then discharged.

The news on the three, became sketchy afterwards, but the following became known. William Forde emigrated to Australia, shortly after the tragedy. He got a job as a cook with a party of rabbit exterminators in the outback.

It is said that one day while baking bread he mistook arsenic for baking powder, and he died along with two others.

Patrick Downing was employed again in at least one Cork city cinema as a projectionist. He is said to have died of cancer, in St Luke’s Hospital Cork, in the 1950s.

Patrick Brennan, died in the 1960s. In the 1940s the site of the hall was bought by the relatives of the victims and given to Limerick County Council who erected an attractively designed memorial Library there.

On display there are framed photographs, contemporary newspapers, and other material relating to the tragedy.

They are kept in a special glass case in the care of the Librarian. Relatives visit the small Library around the anniversary each year, and still become emotional. A simple concrete cross is built into a plain stone wall, at the spot where the fire began.

A large Celtic style cross marks the communal grave, in the nearby churchyard. On it are inscribed the names and dates of birth of all forty eight victims, innocent men, women, and children whose lives were so cruelly and unexpectedly ended on that September night of horror 95 years ago.

Of all the news covered by the Limerick Leader in its 132 years of publication the Dromcollogher tragedy must arguably be one of the biggest stories. West Limerick 102 FM Presenter Shirley O'Regan marked the anniversary of the burning, by airing two one hour programmes over the past two Sundays.

The ruins of a medieval church in the local burial ground would indicate that this church, which was dedicated to St Bartholomew, must have served a colony of people in the area.

There is a record of the church of Dromcollogher having been destroyed in the war of 1302. It is likely that the present ruined church in the burial ground replaced the one destroyed.

Percy French was one of Ireland's foremost songwriters, and best known as a writer of humorous songs, including Dromcollogher. He wrote this song while on a visit there.

I suppose you’ve not been to Dromcollogher?

And see the fine place we have there

There’s only one street in Dromcollogher

But then ’tis a glory to see

Ye may talk till you’re dumb, but give me old Drom

For Drom is the place for me.

After the defeat of the Munster Geraldine's by the English in 1583, the Dromcollogher area was part of a huge tract of Geraldine lands in West Limerick that was confiscated and granted to the English Planter family of Courtenay.

About the year 1640, the then Courtenay landlord received a patent for the holding of a weekly market and annual fair in Dromcollogher. A village of Dromcollogher was very likely in existence by then, the village being a creation of the Courtenays.

The Courtenays were very tolerant landlords in the matter of religion, even in the time of the Penal Laws against Catholicism. There was a Catholic chapel in Dromcollogher in 1710; and a notice advertising the sale of interest of several farms, part of Sir William Courtenay's estate, which appeared in the Munster Journal of January 3, 1751, stated that proposals would be received "at the new Market House in Newcastle West or at the new Mass House at Dromcollogher".

Samuel Lewis in his Topographical Dictionary of Ireland published in 1837 wrote the following about Dromcollogher parish: About one fourth of the land is under tillage , producing excellent crops, and the remainder is meadow and pastureland. The hills are cultivated nearly to their summits, and there is neither waste land nor bog; there are on the south side of the village, forming a natural boundary between the counties of Limerick and Cork.

The village is a constabulary police station and has a daily penny post to Charleville. Fairs are held on March 15, May 2, June 17, August 24, November 5 and December 3.

Horace Plunkett opened the first co-operative creamery in Ireland in Dromcollogher in 1889. The old creamery is now a museum and well worth a visit to see the old equipment used at the time. I was present that very wet afternoon in 1989 to witness President Patrick Hillary do the honours.

Part of the spacious triangular green in the town square has been designated a Garden of Remembrance to all those who strove or fell in the cause of Irish freedom. In 1968 Dromcollogher won the premier All-Ireland Glór na nGael award as being the town that had done most in the previous twelve months to promote the use of the Irish Language.

President Eamon de Valera presented the award in the presence of a very large gathering assembled round a platform in the Garden of Remembrance.

The best known product of Dromcollogher is Dresden porcelain. The original Dresden industry, established by Anton Mueller in Volstedt, Germany was destroyed in World War 11.

After the war, Anton's grandniece and her husband, Oskar Saar, came to Ireland, and in 1962 they set up a factory in Dromcollogher. From the factory which employed fifty skilled workers at one time, many specially commissioned pieces have gone all over the world to mark special occasions.

Pope John Paul 11 was made a presentation of Irish Dresden, on his visit to Limerick in 1979. Each of the beautifully delicate pieces is stamped with the traditional Mueller-Volstedt trademark with underneath, the words, “Irish Dresden”

The present Dromcollogher is a progressive town with all the modern amenities including the new town park. Lack of space prevents me from expanding, so, to partly re-echo Percy French, if you haven't been to Dromcollogher, 'tis time you went there to see and savour all that the place has to offer.