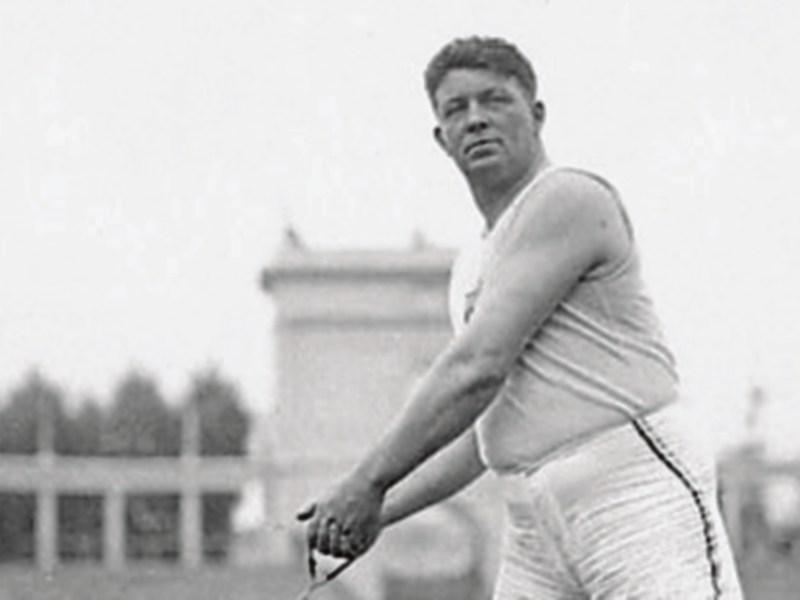 Patrick Ryan pictured at the 1920 Antwerp Games, he won gold in the hammer throw and silver in the 56-pound weight throw during those games

LIMERICK HAS a proud history participating in the Olympic Games, especially in those early years. Limerick born athletes have won 10 medals at the Olympics, 5 gold 4 silver and 1 bronze, from the years 1900 to 1920. Limerick’s first Olympic medals were won by John Flanagan, and Paddy Leahy in July 16-17, at the Paris Games in 1900.

John Joseph Flanagan was born beneath the shadow of the Moorestown Mountains in Kilbreedy on January 28, 1868. He was an Irish-American athlete, and the first Olympic hammer throw champion in 1900. He was not alone a great Limerick athlete but one of the greatest stars that ever graced the world stage. He was an all-rounder who brought the hammer (16 pounds) record from 140 feet 11 inches to 184 feet 4 inches and throwing the 56-pound weight from 35 feet ten inches, to 38 feet 8 inches, surely a remarkable achievement.

A powerfully built man, standing 5 feet 10 inches, tall and weighing 220 pounds, Flanagan demonstrated versatility early in athletic events in his native Ireland. The co-ordination of movement and dynamic energy which he brought to the throwing of the hammer, and the slinging of the half hundred was amazing.

He won competitions in the long and triple jumps, shot put, and hammer throw, taking the English hammer championship in 1896 before immigrating to the United States, a year later. At that time, he already held the world record for the hammer throw. Flanagan in 1897 became the first man to throw a hammer more than 150 feet and in 1899 the first to throw it beyond 160 feet.

He competed for both the New York Athletic Club, and the Irish American Athletic Club He was part of a group of Irish-American athletes known as the Irish Whales. In 1903 he became a policeman in New York City and his first posting was something of a blessing. He worked in the Bureau of Licences, where he had a lot of time on his hands, which was mostly used for training at the Irish American Athletic Club in Queens. He was one of the early masters of the three-turn technique.

When he won a third gold medal for the hammer throw (51.92m (170 feet 4 inches) at the 1908 Games in London, the crowd booed him for his Irish heritage. An element in the crowd appeared to dislike the idea of an Irishman, competing for the USA at the Olympic Games, and made their feelings clear, vocally, by booing the Limerick man. Flanagan defied their disapproval to take the laurels with a throw of almost 52 metres.

On July 24, 1909, Flanagan set his last world record in the hammer, with a throw of 56.18 meters. He quit the police force in 1910, after his public office squad was abolished and he was transferred to the West 68th Street Station and forced to walk a beat along Central Park West, giving him no time to compete.

Flanagan returned to Ireland in 1911 and a few years later took over the family farm on the death of his father on February 24, 1912. He won his final international event competing against Scotland in 1911, plus the Irish hammer championship in 1911 and 1912. He later coached Patrick O’Callaghan, the Irish hammer thrower who won Olympic gold medals, in 1928 and 1932 the Irish Free State’s first gold medal winner.

In all Flanagan, in addition to his three Olympic gold's, he also won a Silver medal in the 56lb Weight throwing event at St. Louis, in 1904. Over the course of his career, he set seventeen world records, won 9 US Championships, and also won the American shot-put title five times. He died, aged 70 on June 4, 1938, in his native Limerick, and a statue was erected beside Martinstown Church in 2001.

Patrick Joseph Leahy was born on May 20, 1877, in Cregane, Charleville, and County Limerick on the border between Limerick and Cork. Their home off the main road was just a stone’s throw from the rebel county and the family were often claimed as from Cork. He was one of seven brothers all of whom were sportsmen, and their sister was just as good.

Paddy who was a born jumper stood at 5 foot 9 inches and weighed 12 stone whilst in training and he first appeared as a competitor in 1895. He was universally acknowledged the most stylish jumper that ever crossed a lath. Beautifully built, he ran like all the Leahy’s, straight at his leap, rose almost perpendicularly, picked his knees to his chin, in a most natural fashion, swung around on top with no apparent effort and landed facing his take off as lightly as a thistle down.

At nineteen meetings in 1998 he had forty three firsts in competition against Ireland’s greatest athletes. Paddy won the British high jump in Dublin in 1898 with a record jump of 6 ft. 4in. (1.93m). He also competed internationally in the long jump and the hop, step and jump triple jump

In the 1900 Olympic Games, in Paris competing for Great Britain, and Ireland Paddy Leahy took part in three jump disciplines. He won the silver medal, in the high jump 1.78m, behind Irving Baxter, of the United States, and the bronze medal in the long jump 6.71m, behind Alvin Kraenzlein, and Myer Prinstein, He finished in fourth place in the hop, step and jump behind Prinstein, James Connolly, and Lewis Sheldon.

In 1909 Paddy and Con Leahy immigrated to the United States. At the Irish Games in Chicago in May 1915 when Paddy was forty years of age, he jumped 5 foot and a half inch in the standing high jump, 11 foot 10 inches in the standing long jump and 35 feet 9 inches in the three standing jumps (hop step and jump) an unparalleled achievement for his age.

We will continue our Olympic story next week.