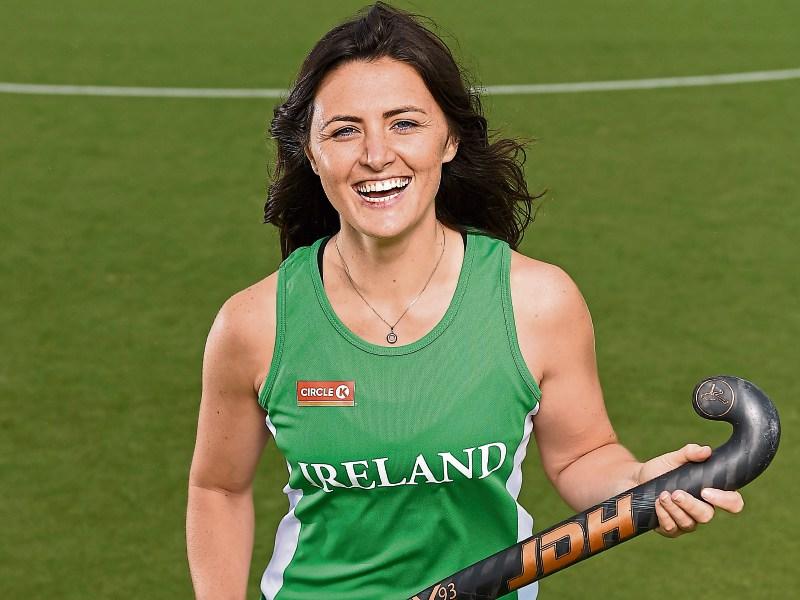 Róisín Upton who plays with the Irish Women's Hockey team. They have a real chance for a medal at the Tokyo Olympics

LIMERICK ARE well represented on the Irish team participating in the delayed Olympic Games that commence in Tokyo this Friday, July 23.

Sarah Lavin will compete in the 100m hurdles, Róisín Upton with the hockey team, Greg O'Shea with the rugby sevens and Carolyn Hayes in the individual Triathlon. Carolyn from Newcastle West will be competing on Monday July 26, the same date that Tim Ahearne from Dirreen Athea won his gold medal in the Hop, Step, and Jump gold medal in London in 1908. It would be wonderful if history repeated, and Carolyn won another medal for West Limerick.

Dirreen is a townland in the parish of Athea in West Limerick, and it translates to Little Oak Wood. It is located a few miles outside the village on the R524 on the way to Glin. From this background emerged Tim and Dan Ahearne to showcase their great talents to national and international audiences.

They went from Dirreen’s fields of gold to Olympic and World athletic fame. Tim and Dan along with older brothers William and Mick grew up on the family farm, helping out with the jobs that needed doing. They enjoyed the freedom of the open spaces to play football and other games of that time, and they lined out with their local club Athea in Gaelic football.

They trained for their athletic events by jumping the Abha Bheag, a small river adjacent to their homestead. They attended school sports at Saint Michael’s College Listowel and other sports meetings. They often finished first, second third and fourth in the same event showing great promise for the future. They travelled by bicycle to meetings even as far away as Fermoy in Cork.

So, few people realise the dream of winning a gold medal or setting a new World record as Tim and Dan did. It must have been a very exciting time around Dirreen and Athea during those heady days of athletic victory abroad. Family neighbours and friends must have been so proud of the brother’s exploits as the news arrived slowly of their successes in England, Scotland Canada, and the US. There were no phones, airmail letters faxes, emails, or Skype at the time to speed the news to famed Dirreen.

Tim was born on August 17, 1885, and he was of fair complexion, with fair hair and blue eyes and stood 5 foot eight inches, in competitive action. His jumping skills were first revealed at his College sports, when he jumped two feet beyond the long jump pit during practice. He also performed a remarkable feat by jumping across the river Gale, a jump of 21 feet from bank to bank. At the age of 18 he won the two jump events at Listowel sports, on July 27, 1904. Success followed success, and 1907 was an exceptional year for Tim, winning the All-Round Championship of Munster at Fermoy and the GAA Long Jump Championship plus sixteen first prizes in a near record year for any athlete.

1908 was destined to be Tim’s greatest year, and the following is an extract from David Guiney’s book Silver, Gold Bronze, describing Tim’s historic gold medal feat. The triple jump at the fourth Olympic Games in London, on July 26, 1908, brought together the most impressive field the event had known up to then. There were 19 competitors, representing 7 nations, and 14 of these had been over 46 feet in the months preceding the Games. There were 3 Irishmen in the competition Martin Sheridan representing the USA, and Tim Ahearne, and Michael Dineen, representing the United Kingdom.

Sheridan injured himself in the preliminary rounds and had to withdraw, and Dineen was surprisingly below form and was eliminated in the early rounds. The clear favourite was Eric Larsen of Norway who had cleared over 48 feet in the weeks coming up to the event. Calvin Bricker, the Canadian champion and Platt Adams, the American champion were seen as the likely threats to him.

In the first round 15 competitors cleared 44 feet, and 8 of these cleared 45 feet, and Tim Ahearne cleared 45 feet 8 inches which appeared good enough to earn him a place in the final 6. In the second round Larsen went to 47 ft,2 ½ ins and Bricker to 46 ft. 2 ins. Garfield Mc Donald from Canada surprised everybody with his best jump ever of 47 ft. 10 ¼ ins, and a new Olympic record. It was short lived as the 22-year-old Tim Ahearne finally showed his Irish form, and landed far out into the pit, to extend the Olympic record to 48ft 4 ins.

In the first round of the final Mc Donald had another magnificent jump which carried him out to 48 ft. 5 ¼ ins, and another Olympic record. None of the other five improved their distances, but Tim jumped well over 47 feet. The excitement was intense as the competitors assembled for the final round. Mountpleasant, Adams, Bricker, and Larsen all failed to improve on their best, and Mc Donald fouled his final effort. It was all down now to Tim and with his youth and lack of experience at top International level; few believed he was capable of anything better.

He was the essence of coolness as he went to the top of the runway for the last jump of the 1908 Olympic Games triple jump competition. He came in at a furious pace, hit the board with a little margin to spare, got in a fine opening hop, took a remarkably long step, and finished off with a great jump that landed him far out towards the end of the pit. Following a delay to measure and re-measure the distance it was announced that Tim Ahearne had set a new Olympic and World record of 48ft 11 1/4ins. ( 14.92 meters ) Tim Ahearne, was the youngest Gold Medal winner at the games and the Olympic champion of 1908.

His win in the British Championship in the Long Jump and second place in the High Jump gave him the Lord Alverston Cup in 1909. In 1911 he was awarded the Winged Foot Trophy for being the best individual athlete to score the greatest number of points for the New York Athletic Club. Tim died in December 1968 in New York. Athea Community Council erected a Wing Foot Monument to the brothers in 1996 in Athea.

In those days all athletes were equal as there were no facilities, coaches, or drugs, and the true Olympic spirit shone through. It was harder to win honours making the achievements of Tim, Dan, and our other Limerick athlete’s achievements far greater. They did our country proud as I am sure our four present day Limerick Olympians will do.