Then & Now: In sickness and in health: Cheshire, a man on a mission 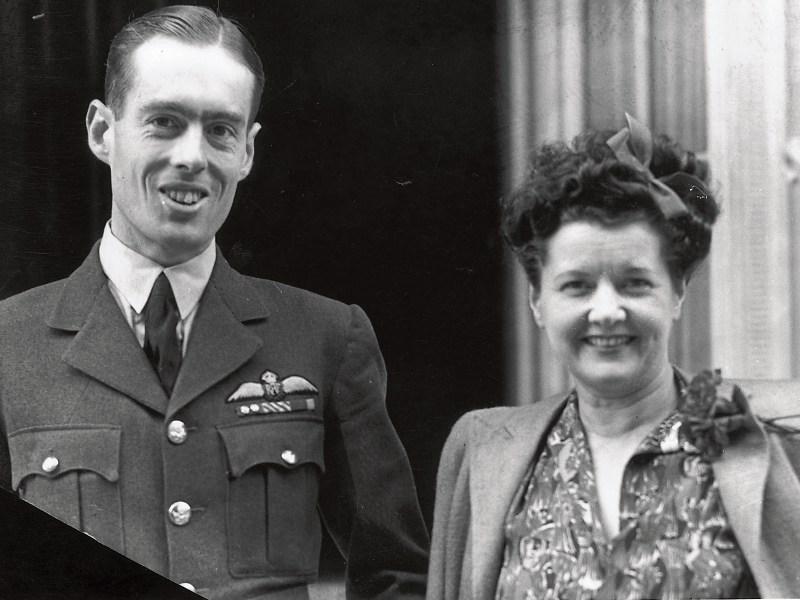 Leonard Cheshire in 1944 with his first wife, Constance Binney

LEONARD CHESHIRE, the founder of the Cheshire Homes, must be one of the great humanitarians of his time to set up homes in fifty countries around the world for the disabled.

He was born on September 7, 1917, the son of a law professor and educated at Stowe School and Merton College, Oxford. He was a high-spirited young man, not academically brilliant, whose aim in life until he left Oxford was to drive a Bentley, be dressed by Saville Row, and make pots of money.

His chief claim to fame seems to have been the daredevil reputation he later earned for himself. On July 15, 1941, Leonard Cheshire married the American actress Constance Binney, 21 years his senior, but the marriage was short-lived and childless. Their divorce was ratified in January 1951.

He joined the R.A.F., when he was aged 21 and longing for excitement when Britain was at war. He was the youngest Group Captain in the R.A.F., and one of the most highly decorated pilots of the war. His life was filled with amazing achievements receiving several awards for bravery including the Victoria Cross, for flying a hundred missions as leader of the elite 617 Squadron ‘The Dambusters’ during the second World War.

He was the sole British observer during the Allied Raid which dropped the atomic bomb on Nagasaki in 1945. His legendary war career included eight months leading No. 617 Squadron , The Dambusters

He left the R.A.F. in 1946, after the War was over, and set up several new ventures. One was a community to provide an opportunity for ex-servicemen and women and their families to live together and contribute to help their transition back into civilian life.

It was not as successful as hoped but it sowed the seeds for the setting up of the Cheshire Homes. One member of the community became terminally ill with cancer, and when discharged from hospital had no place to go, no money and nobody to care for him. Leonard accepted responsibility and took a quick course in basic nursing and cared for him single-handed until his death.

Other patients were sent to him and at one time he had 25 seriously ill people to care for. He caught TB from a resident and spent many months in hospital, and later in bed, while others joined him in the care of the sick. Leonard set up the first Cheshire Home Le Court, in Hampshire, England in 1948, and two others followed. At this stage committees had been put in place and they agreed that the homes should share a common name and despite Leonard's protestations, it was agreed they would bear his name.

In 1952 he set up the Leonard Cheshire Trust and Foundation, whereby each country, Ireland included, had its own trustees in place. This ensured continuity of his work whether he was part of it or not. He became a Catholic that Christmas Eve, and his religion, deep faith and prayer influenced all his actions and thoughts, and he dedicated the rest of his life to supporting disabled people.

On April 5, 1959 he married Sue Ryder, a fellow Catholic convert and charity worker, and they had two children Jeromy and Elizabeth Cheshire and they lived in Cavendish Suffolk. She also established a charitable foundation, the Sue Ryder Foundation, to help disadvantaged people, which also operates in Ireland. He and Baroness Ryder were one of the few couples who both held titles in their own right.

In 1961 Leonard Cheshire set up Ireland’s first Cheshire service in Shillelagh, Co. Wicklow, supported by volunteers, and since then further homes services have developed around the country. With a workforce of more than 800 employees and volunteers working across 14 counties of Ireland, the employees are critical to the quality services they provide.

Today there are ‘Cheshire Homes’ around the world in over 50 countries supporting both adults and children. Queen Elizabeth conferred the prestigious Order of Merit on him in 1981, and ten years later he was made a life peer.

On Sunday July 3, 1983, he visited Rathfredagh Cheshire Home to perform the official opening of their beautiful new extension at 2pm, which was built by ANCO labour, but paid for by the generosity of the people of Limerick and beyond costing app £ 65,000 in materials.

He was very popular with the residents, who were very impressed by his deep and sincere devotion to the welfare and care of the disabled in every corner of the world, during their two hour chat. In his brief opening speech, he warmly praised the Irish for their attitude towards the less well off, and he also visited the stalls and spoke to the people attending the annual Gymkhana and Garden Fete. He chatted to the residents that evening and stayed the night at Rathfredagh.

A few years before his death Leonard Cheshire was diagnosed as having motor neurone disease. His last months were spent in a wheelchair. He could now claim he was one of them, a resident in a Cheshire Home.

In July 1992 he wrote about having the disease. “Far from this unexpected development being a setback, I feel in my heart it is far more probably a blessing in disguise. Already it is giving me new insights into how disability affects one's life and what one needs to do to try and rise above the limitations it poses.”

In good health and in bad health he remained its guiding force and its most loyal worker. On July 31, 1992, he died of motor neurone disease, and Cardinal Hume paid him the following tribute: “He was a truly outstanding human being who was exceptionally brave and compassionate, and a remarkable man of prayer.”

Leonard was a lifelong tennis fan, a member of the All-England Club and a formidable amateur player well into his seventies. Those who attend Wimbledon this July will no doubt enjoy his sport.

The annual garden fete may be cancelled in Rathfredragh due to Covid-19 again this year, but the work stated by Leonard continues to benefit his fellow humans, not alone in Limerick but all over the world.