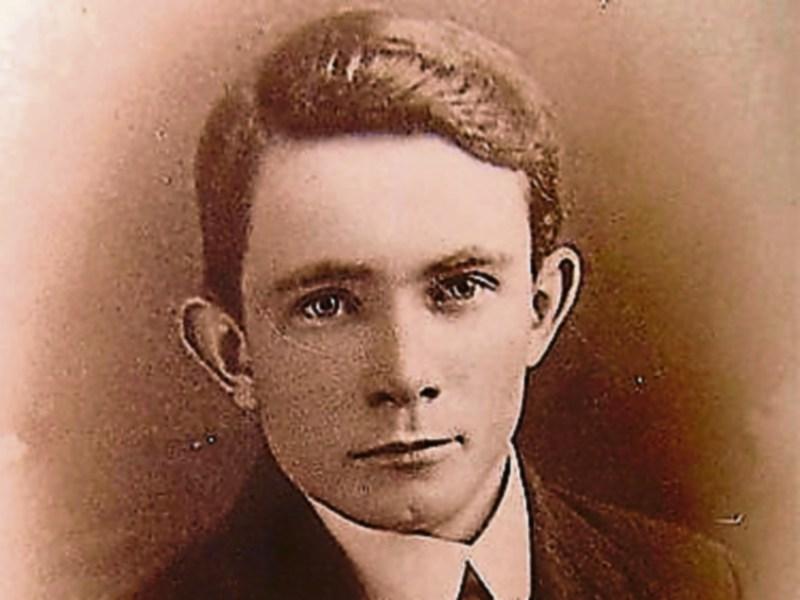 LIMERICK LOST a noble and brave son when Con Colbert, was executed in Kilmainham Jail for his part in the Easter Rising on May 8, 1916.

Small in stature, and young in years, he was a giant in the fight for Irish freedom and paid the ultimate sacrifice. Con was born on October 19, 1888 at Moanlena, Castlemahon. He had twelve brothers, and sisters, and he was the fourth youngest. His father Michael who was a farmer, came from Athea, and his mother Nora Mc Dermott came from Cooraclare, in county Clare. Michael Colbert was a former rebel who had taken part in the Fenian uprising in 1867.

When Con was about three years old the family moved to Gale View House Templeathea, Athea, where he attended the local National School. He was taught the usual subjects reading, writing, maths, geography, grammar, and drawing. Con also attended Kilcolman National School for a while, staying with his relatives, the Colbert family in Balliston. He was very interested in local history the Irish language, and in national affairs, as a youngster growing up.

At the age of fifteen years, he went to live in Dublin with his sister, and he attended the Christian Brothers School’s at St Mary’s Place, and O’Connell’s. On leaving school, Con secured employment at Kennedy’s Bakery in Parnell Street, and remained there until 1916. He joined the Irish Republican Brotherhood, and he became very proficient in military drill. In 1909 he joined the Fianna Eireann, at the first meeting, and was soon putting his skill as a drill instructor, to good use by teaching the new recruits.

He gave the Fianna every moment of his time, and during his summer holidays, he would cycle from place to place, getting a few boys together to start a new branch. With his eagerness and youthful enthusiasm, he proved a most successful recruiting agent. Con joined the Irish Volunteers, on their foundation in 1913, and was one of their first drill instructors. He was quickly appointed Captain of F Company 4th Battalion-a rank he held until the Rising.

Despite his youthful age, he shortly became one of the inspirations of the new and vigorous resurgence movement and in due course, he was appointed to Volunteer Headquarter Staff. During the years which preceded the fateful Rising of 1916, Con devoted every moment of his spare time, to the work of organising the men, and boys, who were to participate in that historic event. Con wrote poems, as well and signed them with the pen name An Claidheamh (The Sword).

He spent every penny he had of his hard-earned money in the advancement of the movement, to which he had given everything but his soul. Padraig Pearse spoke lovingly of Con, and all the help he gave him as drill instructor at Pearse’s Scoil Eanna. Con was offered a salary for his services but declined as he saw his work as being a contribution to the national cause. Con was not a big man being just over five feet tall.

Madge, a sister of his comrade-in-arms, Edward Daly from Limerick knew Con very well as he used to call to their house, coming from Dublin, on the way home to Athea. She recalled he was bright and cheerful and always in good humour. So spiritual was he, that he abstained from meat during the seven weeks of Lent, and he was always slipping away to say his prayers in some Dublin Church.

He would visit her uncle also, who was an old Fenian, like his own uncle, who was a member of the Fenian Brotherhood. They would discuss events until the small hours, and Con wrote him a short note before he was executed. Madge said he was highly thought of by all the leaders.

Tom Clarke held him in high esteem, Eamonn Ceannt, loved him and was forever singing his praises, Padraig Pearse, trusted him as a friend and comrade. Their last meeting was a week before the Easter Rising, when they shared tea, and a long chat in O’Connell Street, Dublin.

Con was calm and happy talking of the risks, as part of the day’s work, in the cause for which he lived. He said that he believed they would all go down in the fight, but the sacrifice would be well worth it. He was in the highest spirits when he left Madge, glad of the opportunity to play his part in the struggle.

When the fighting broke out in 1916, Con had command of one of the outposts of the South Dublin Union at Watkins Brewery in Ardee Street. The number of men under his command was about twenty. After two days of fighting, he was ordered to move his men, to reinforce a large outpost at Marrowbone Lane. This garrison with the others under the command of Eamonn Ceannt and Cathal Brugha, won immortality both for bravery and strategy. They shattered and drove off large forces of experienced English troops, commanded by Sir Francis Vane.

The order to surrender came as a great blow to the men and Con, whose youth and subordinate command could have saved him. He stepped into the place, of an older man who had dependents and suffered in his place. After the surrender, the agents of Dublin Castle made sure that Con was singled out for execution. The reason for this special treatment can be found in his activities, as an organiser of the national movement prior to 1916.

Con did not send for any of his relatives to visit him in jail, as he felt that visit would grieve them too much. He wrote a number of letters to his brothers, and sisters, and relatives and friends. Writing to his sister on the eve of his execution he said: ‘’Perhaps I’d never get the chance of knowing when I was to die, and so I will try and die well. I received this morning and hope to do so again before I die. After asking his sister to have Masses said for him, he continued: ‘’May God help us-me to die well- you to bear your sorrow, I send you a prayer book as a token” Today we remember Con on his 105th anniversary. I will continue his story in next week's column.