Then & Now: New film shines a light on forgotten history 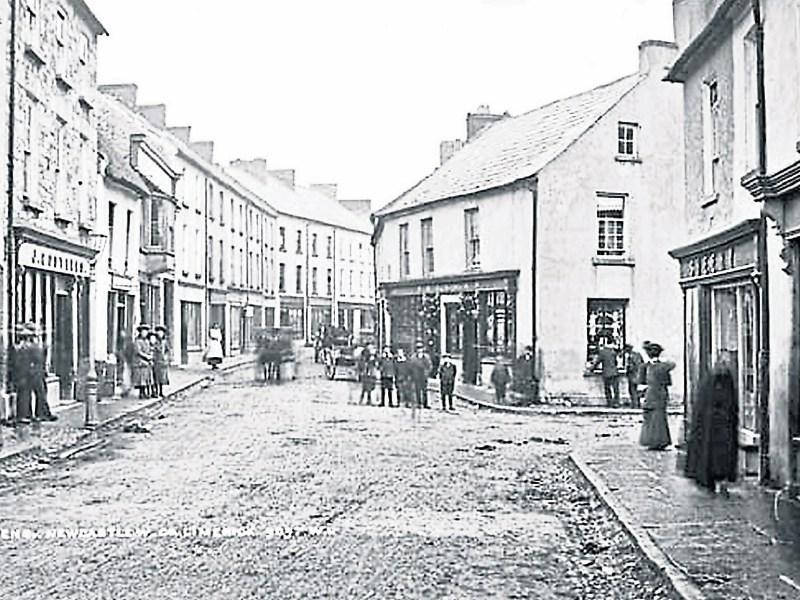 A FILM on the origins and history of Phelan's Mill/Undertakers/ Cinema/ Hardware Newcastle West was shown before a packed attendance at Newcastle West Library on Thursday, January 16.

It was a most interesting night with the one-hour film narrated by Sean Kelly charting the family and their successful businesses, including talks from the local historical society members, John Cussen, and Pat O'Connor, and Anne Phelan played tunes on the violin. The men responsible to produce the video were John Upton (who showed it) Sean Kelly, Michael O'Maolcatha, and Peter Cremin.

My memories of the Phelan family cover the last twenty years, mainly from visiting their hardware shop which was on Bishop Street and a storage shop across the street, and the farm machinery along the wall of the Carnegie building. It was a fine well stocked shop with very friendly and helpful staff, which closed in November 1990. This brought an end to the family businesses which were so prominent in the town since 1889. Their relation the late Frank supplied me with a few interesting stories about them over the years, especially his granduncle Willie, an outgoing innovative man, who was never afraid to take risks, with mostly the public good in mind. The Phelan family business commenced with their involvement in the mill.

The Fitzgeralds were a powerful Norman family who ruled west Limerick towards the end of the 13th century. They built castles in Adare, Askeaton, Newcastle West, and Shanid to strengthen their hold on the land. On the banks of the river Arra which formed the town outer defences was the Newcastle castle built. The needs of the inhabitants of the castle saw a mill being constructed to provide food for the people and horses.

In the 1850s, Patrick Griffin owned the corn Mill in South Quay, or Goats Street as it was known then. This mill was later leased to William Quaid a shopkeeper from Bridge Street in 1862. In 1889 Mary Phelan from Walshestown, Castlemahon, took out the tenancy of Quaid's Mill and her son William Phelan managed the business. He replaced the original waterwheel by turbines, and these were used to power the millstones. They were also used to power sawmills, and in later years were used together with gas engines to generate electricity which was supplied to the town.

In 1910 he purchased the premises from the Earl of Devon, and he founded a hardware and ironmongery in Bishop Street. He also sold farm machinery and farm supplies, and he was also a firearms dealer. In 1915 he opened the Picture Palace Cinema in part of the mill building called Saint Ita's Hall. The projectionist was his son Michael, and silent movies were shown. In 1926 the cinema closed, some people say following the Cinema Disaster (September 5) in Dromcollogher, and a year later Latchford's Cinema opened.

In 1915 William set up the Newcastle West and District Power and Light Company. Large generators were installed, and electricity was supplied to the town. The Town Commissioners changed the town lighting to electricity supplied by Phelan’s, and it continued up to 1935, when it was taken over by the ESB. Jim his brother later managed the expanded business which included the sawmill, and corn mill. The Phelan's were funeral undertakers and their horse drawn hearse is still remembered by the older generation. The driver was Sean O'Donnell. The mill continued as a depot for Phelan's until 1983. It was demolished and replaced by an apartment building.

TD Shanahan from Monagea is credited with writing a song called "Barnagh Hill" in which he describes the view of all the different places in lowland County Limerick as seen from that lofty highpoint. The last line of one verse went:

Newcastle West beneath me lies

You can view them all from Curtin's lawn

At the top of Barnagh Hill.

Willie Phelan made an annual trip to the RDS Spring Show in his search for new products coming on the market. On one of these trips at the start of the 1900s he saw this black powdery substance that came from the coast of Chile in South America. It was called Guana and he was told it was used as a fertilizer. He ordered a ton of it (costing £3.5s,) which arrived in Newcastle West Railway Station a few days later. This looked like the bargain of the century to an enterprising businessman, living in a town surrounded by an agricultural hinterland.

He put it on display outside his Bishop Street store in time for the next market day, but it attracted only vague curiosity, and none was sold. In this pre-plastic age, anything packaged or bagged was viewed with great suspicion. As time passed it was becoming a white elephant on public display which was not the best of marketing. His store man volunteered to dump some of the guana in the garden, and even Willie's own brother Mike would not accept it as a present.

Willie Phelan had one ace up his sleeve and made a deal with his brother’s workman Mike Sullivan to spread the fertiliser on his big field going down the Bruff line the next time his boss was away. Mike with his bucket covered the field with the guana, the first opportunity he got when his boss went to the races in Croom. He told curious neighbours who stopped to view proceedings that he was burning moss, and as it was cold March weather his boss did not notice anything strange in the field.

By Saint Patrick's Day the field had developed a shamrock green colour that transformed to a deep purple green glow by early April. The transformation was such that farmers were coming from all locations to view the miracle growth of grass in such a short period of time. Willie Phelan was in business, farmers caution went out the door, and the orders flowed in fast and the Railway Station became a hive of activity.

Summer arrived and hay field yields broke all records, and artificial fertiliser had come to stay. Prosperity among the local farming community followed, and even the so called more prosperous part of the county -East Limerick-in time were also converted. It had a slow start like all great achievements but in the present-day fertiliser is essential to successful land usage, and all inspired by Willie Phelan.

Willie (died in 1932) was succeeded by his son J.J. (Jim ) who was an easy-going sociable man who had respect for everyone. The billhead for James J Phelan listed the following: Machine Implement Agent and Undertaker, General Ironmonger, Funeral Furnisher, Haybarn Erector, Furniture Dealer, Seed Merchant, Cycle Agent. Jim was a member of the special committee formed in 1933 to build the vocational school in Newcastle West. Canon Duane PP, Father Pat Carroll, and Father Michael Ryan were very enthusiastic, and other businessmen included TJ Cronin, Tim O'Neill, Michael O'Halloran, John O'Shea, Willie Raleigh, and Sean Brouder, who was a member of the Vocational Education Committee. They did great work with builder Maurice Holly from Tarbert, and the new school costing £ 3,900 opened a year later. Jim died in 1973 and his daughters Anne and Maureen took over the running of the business. They handed over the undertaking business to Christy Reidy and gradually eased down in many of the departments of the businesses. In 1990 a sale was announced, and the shop sold off its contents at bargain prices, and the doors closed in November, bringing an end to the Phelan family involvement in Newcastle West. Next week we will tell the story of how Willie Phelan sold his first Woods mowing machine.