Then & Now: Recalling a unique aviator and world-class athlete 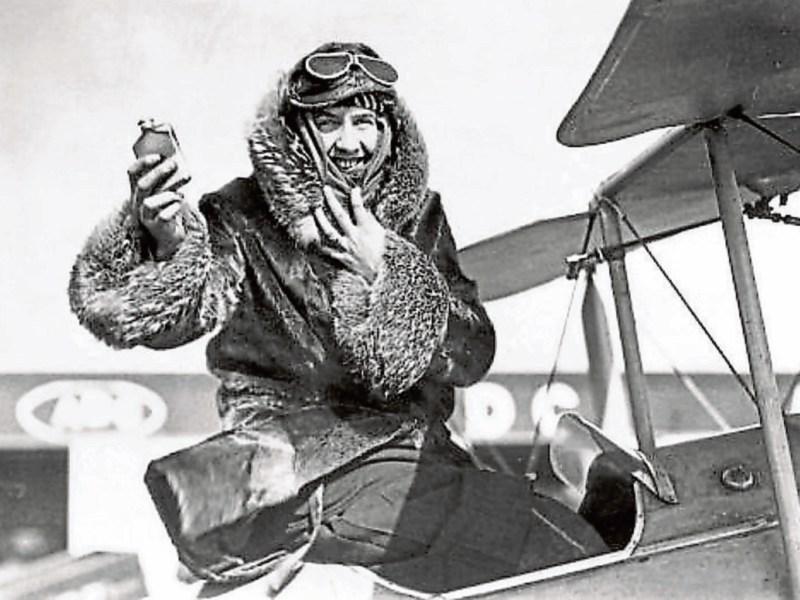 SOPHIA PIERCE pioneer aviator and athlete was born to Kate Doolin, and Jack Pierce, on November 10 in Knockaderry House. Following a family tragedy, she was brought up by her paternal grandparents.

She was educated at Saint Margaret’s Hall a Dublin School for young Protestant ladies. After the outbreak of World War One she went to Britain and became a dispatch rider for a unit attached to the Royal Flying Corps. She married an Army Officer William Elliott-Lynn after the war ended and took a degree in agriculture at the Dublin College of Science to prepare for a move to Africa where her husband was based. While working in Aberdeen University for a time she got interested in women’s athletics, assisting in the setting up of the British Women’s Amateur Athletic Association in 1922.

Sophia competed as well as being the Vice –President and in 1923 she broke the World high jump record and the British javelin record. She joined her husband on their coffee farm in Kenya but returned to England in 1925 following their divorce. She wrote a coaching manual Athletics for Women and Girls and pushed the decision to allow women to compete in the Olympic Games. She took up flying at London Light Aeroplane Club being its first female member and made her maiden flight in August 1926. Sophia went on to become the first women in Britain to hold a Commercial Pilot’s Licence and to make a parachute jump. She took part in flying demonstrations and races around the British Isles, and the Continent as a professional pilot. She flew over her native place on many occasions even flowing low enough to drop presents and messages to relatives and friends.

Sophia remarried following her husband’s death in 1927 to Sir James Heath a rich English businessman and embarked on several record-breaking aviation feats. Now known as Lady Mary Heath she completed the first solo flight from Cape Town South Africa to London via Cairo in 1928. She also broke the Women’s seaplane altitude record and the light aircraft altitude record. Following the breakup of her second marriage in 1929 she commenced a tour of the USA giving lectures and flying demonstrations. She was seriously injured in a plane crash in Cleveland, Ohio in August 1929 but she continued with the touring.

She married her third husband George Williams and they returned home to live in Ireland where she took a keen interest in the evolving aviation business. They bought Iona National Airways and hoped to progress the venture but their dreams of running an airline were dashed in the cutthroat business before the founding of the national airline. Sophia’s career went downhill after this and her marriage ended, and she returned to England with failing health, and a drink problem. Her lifestyle made relationship’s difficult all her life.

In May 1939 Lady Mary Heath died aged 42,from injuries received from a fall in a public bus, (or tram car accident) and her ashes were scattered (supposedly) over her hometown of Newcastle West. A plaque to Sophie can be seen on the wall of the Allied Irish Bank in Newcastle West square. For all her wonderful achievements , the name Sophie Pierce is hardly known in present day Ireland more the pity. It would be nice to see a Sophie Pierce trophy being contested by our women athletes. No Irish athlete better deserves to be remembered 80 years after her death.

HEDGEHOGS NORMALLY hibernate between November and March/April depending on the prevailing weather conditions. During hibernation a hedgehog's heart rate falls dramatically, from 190 beats per minute down to about 20. The animal's core body temperature also drops and can get as low as 10 degrees Celsius ( 50 degrees Fahrenheit). It is this hibernation period that accounts for most hedgehogs’ deaths, with an estimated 75% of juvenile hedgehogs never waking from their first winter's sleep.

The hibernation nest is usually built under a hedge, in an old rabbit burrow or even at the base of a garden compost. It is here that hedgehogs carry nesting material to their chosen sites, and once they have made a big enough mound, burrow into the centre and make a cosy bed to sleep away the winter.

Hedgehogs can live for up to five years, but few reach this age in the wild. While curling into a spiny ball provides animal protection from natural dangers, the badger is the only native Irish animal capable of prising open and killing a hedgehogs. The spiny ball offers scant protection against man made threats. Principal among these is traffic and thousands of hedgehogs are killed every year on our roads. Other prevalent man-made killers are lawnmowers and strimmers. Most animals flee to safety at the approach of these mechanical killers, but hedgehogs rely on their natural defence and simply curl into a ball and wait for the inevitable fatal result.

Taking refuge in bonfires is another common cause of hedgehog death. To them, an unlit bonfire is like the hedgerow habitat, and many are unwittingly burnt every year. More fall into steep -sided ornamental ponds or water features while taking a drink. Despite high mortality rates hedgehogs are still relatively common, and if you venture into the countryside after dark sooner or later you will probably hear the rustles grunts and snuffles during their foraging. If you're lucky you may even catch a glimpse of one as it searches through the undergrowth for its next meal.

In spring and early summer female hedgehogs give birth to one or two litters of up to five young. At first baby hedgehogs rely exclusively on their mother's milk but start taking solid food after about three weeks. They are fully weaned at around five weeks old. During the summer hedgehogs sleep by day in a temporary nest of leaves, moss, and grass. They emerge as the light fades, to feed ravenously. By autumn they will have put on a considerable amount of weight, ready for hibernation during the winter months.

Research suggests that the earliest record of hedgehogs in Ireland come from County Waterford around the same time as the Normans arrived in the 13th century. Since then these endearing little mammals have became firmly established native and something of a favourite with people. The common name hedgehog comes from their pig like habit of rooting around in the undergrowth for food. They are quite vocal and can be heard grunting and snuffling loudly as they forage for slugs, snails’ beetles and earthworms.

They are solitary , non territorial animals that are mainly active at night, particularly after heavy rainfall, when they can find their prey more easily. They have poor eyesight but a keen sense of smell, and excellent hearing , both of which help them to find food. Hedgehogs are 15-30cm,( 6-12 inches) long and weigh between 1-5 and 2 kilos ( 3-5 to 4-5 pounds). Their back is covered with five thousand or more short yellow tipped spines with brown fur covering the rest of the body. Strong muscles allow hedgehogs to curl into a tight ball when threatened , relying on their spines to protect their vulnerable head and underside.

I often come across a hedgehog around my locality this time of year, foraging for food before the big sleep. It is a pity that so many die and never get to see a normal lifespan. They deserve better and people should look out for them as they go about their daily lives.