Then & Now: Sorting the facts from fiction of ragwort

Many folklores and customs are associated with this tiny weed 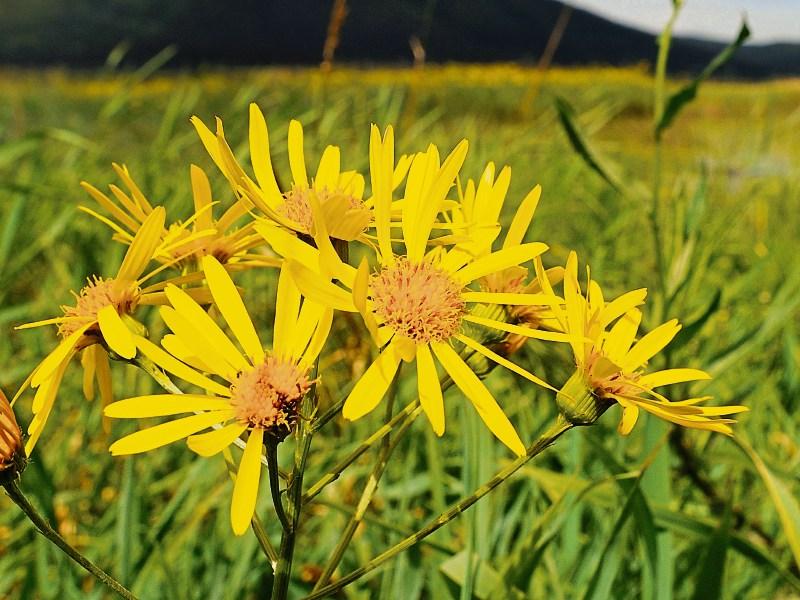 You should really wear gloves when pulling ragwort, as its poison can be absorbed through the skin and is accumulated in the body over time

RAGWORT USED to be regarded as a fairy plant to be treated with caution when I was growing up.

Because of its toxic leaves it was dangerous as animals could die if they ate the leaves. I can recall the notice in the local post office warning farmers that they could be prosecuted if they had toxic weeds in their fields including ragwort, thistle, and dock. In Irish it is called Buachalán Búi and around my area it was known as Buchallawns. As well as its poisonous ability it had the capacity to invade and imprison land as it multiplied.

It originated in Asia, and it spread in a similar way as grass once spread borne on the wind to Western Europe. Each Ragwort plant can produce 200,000 seeds over a six-week period from July to September. It is a very successful plant to grow, but also a pest and it is held in high contempt by all people. All the farmers hadn't a good word to say for it as it flourished in many fields they owed.

The majority of seeds are dispersed by wind, but can also be carried by water, by animal coats and hooves, on the soles of muddy boots, and by farm machinery. The seeds can remain viable for up to 20 years depending on the soil conditions, and the root fragments are also capable of reproduction.

I hated the job of pulling up buchallawns when I was young as it took a lot of effort to prise them free. I preferred using a hurley to hit them down low at the base, but in hindsight that only helped to spread them. The secret was to move around and pull from different directions to loosen the roots. Late I used a spade to dig deep under the roots and gently up they came. I put them into a plastic bag so the seeds would not be spread around the field.

A lot of folklore and customs are associated with Ragwort and in Ireland it was believed that the plant was used like a horse by the fairies to ride around on, hence another name Fairy Horse. Their favourite time for doing this was at Halloween, and many tales tell of unfortunates abducted and forced to ride around with them all night, only to wake the next morning, exhausted clutching the ragwort in their hands.

In Donegal it was said to be bad luck to strike a cow with the flowers of ragwort, because it meant that the wee folk would be sure to come and steal the cow's milk. It was commonly believed in Ireland that on Halloween the fairies went about the countryside, and with their breath blasted every growing plant especially fruits and berries and fairy plants like ragwort and late thistles. In contrast to the usual caution surrounding ragwort, in Meath water was sprinkled on the fire with ragwort to bring good luck.

Another common Irish belief was that the favourite place for a leprechaun to mend his shoes was on top of a ragwort on a summer's morning. One folk tale recounts how a man sneaked up and caught a leprechaun. The man was alerted by the tic-tic sound of a hammer. At first, he thought it was the song of a stonechat, a little bird with a reddish breast and a blackcap who makes a sound like one stone being hit against each other. But then he thought that it was too late in the year to be a stonechat.

When he had caught the little fellow, he gave him a good shake to frighten him and demanded that the leprechaun show him where he had his crock of gold hidden. The leprechaun brought him to a field that was full of ragwort and told the man that his gold was hidden under a particular ragwort. The man was delighted, and he tied a red garter on the lucky ragwort and hurried home to get a spade. When he returned his heart sank because every ragwort in the field had a red garter tied to it. He dug and dug for days but eventually had to give up as there was no crock of gold there. Ragwort is seldom seen nowadays due to modern farming practises.

whistle while you work

ONE OF the familiar sounds of my childhood was whistling, but where have all the whistlers gone at present? It would seem they are all gone to graveyards around the country. The days are long gone when half the men in Ireland were confirmed whistlers. They would whistle as they worked, and all walks of life were at it.

Tradesmen whistled as they worked carrying out repairs, painting houses, mowing lawns and washing cars. Shopkeepers while they made up customers orders, and bus drivers as they motored along.

The corner boys or idle men whistled at length as they held up street walls. People going for a stroll would whistle as they stepped it out, and the postman whistled to warn the dog of his arrival. You could tell a man's mood by the tone of their whistle, which could be happy or sad celebratory or lonesome, whimsical or plaintive. At house dances in the past when musicians were absent a lilter or whistler would perform so the dancing could go ahead. Whistling was mainly done by men, but occasionally women were heard to whistle a tune.

The theme music for the classic Spaghetti Western, The Good, the Bad and the Ugly, contains some lovely whistling by John O'Neill, a professional performer in the 1960s. He was born in England to Irish parents and was in great demand for his whistling as well as his singing skills. He worked using a pseudonym Whistling Jack Smith and had a number one hit single with a novelty tune called I was Kaiser Bill's Batman. Kerry TD Michael Healy Rae was an All Ireland winner, at whistling in his young days. I recall him performing on TV several years ago which was one of the last times I heard live whistling.

A few weeks ago, I was at an event, where people were called upon to do their party pieces, and to my surprise, and many others, one lady whistled a hornpipe. It was pure magic and all present were transfixed at the sound. The lady in question was Anita Bennis, five -time All Ireland Fleadh Cheoil winner for whistling. She is a native of Glenquin, but now lives in Castleconyers, and is well known in music circles. She plays the fiddle and keyboard and is a member of Taylor's Cross Céilí Band, and a member of the multi winning All Ireland Carrigkerry Wren Group.

Anita has noticed a big decline in the number of senior whistlers in recent years, and as a result has recorded a five-track CD which contains three whistling tracks. She is eager to meet people who have whistled as a pastime or know of people that did so in the past. Her CD is available at Buckley's Shop Devon Road Templeglantine, Sonas Health Shop Square Newcastle West, Keating's Shop Raheenagh, and Dolan's Shop Ballygran.

It is very important that the art of whistling is kept alive, as so many of our old traditions are fast disappearing in this modern age of instant downloads and musical aids. Whistlers who are interested in keeping this form of entertainment ( without having to learn an instrument) alive are asked to get in touch. Anita can be contacted on 086-8704376 or by email on abennismusic@gmail.com