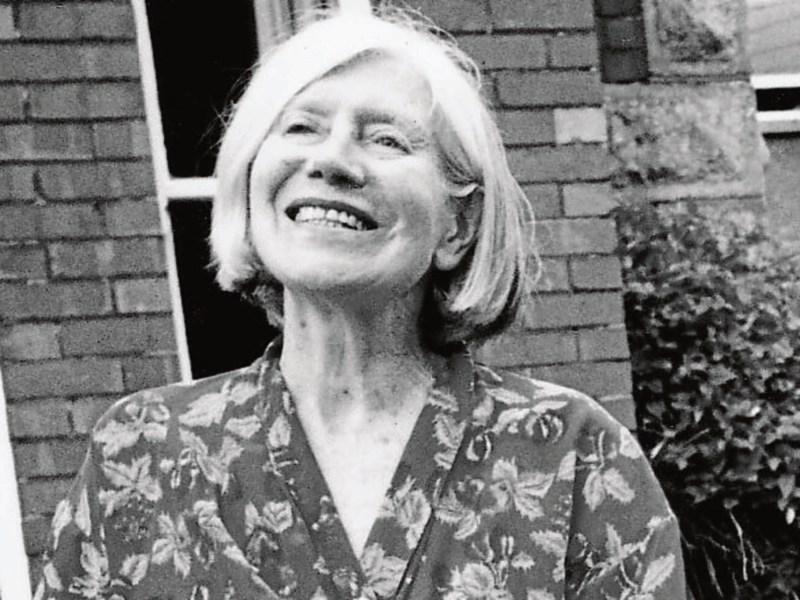 THIS WEEK we recall the life and times of Limerick poet and writer Eithne Strong who died 20 years ago this week. She was a neighbour of mine and I would like to see more recognition for her work which amounted to 16 published books.

"I went out upon the mountain

Out of the buried years

Where have our years gone by?

Where has the dream gone, sweet?

Ah love, come with me now

Upon the old hillside

And let the dream be there

Lovely lines from the late Eithne Strong about her native Glensharrold that inspired so much of her work. She was a poet, novelist and short story writer and a free spirit from Glensharrold in West Limerick. She loved its barren hills and glen, and its gushing streams and mountains. Growing up she spent a happy carefree childhood there close to nature, exploring every nook and cranny on the family's 100-acre homestead. In the distance the River Shannon, underneath the rolling hills of Clare could be viewed from her bedroom window.

The White River meandered lazily along outside their boundary fence with Kennelly's and Fitzgerald's farms next door. A stream passed through the Hazel glen north of their house to join with it close to the children's famine graveyard. This cover from Ash and Hazel in the glen, provided a haven for wildlife to live and grow, and produce the sounds familiar to rural dwellers of the distant past.

Ettie O'Connell was born into this rural way of life at Glensharrold in 1923, the second eldest and only girl in a family of five children. Her parents John and Kathleen were both teachers at the local National School in Carrigkerry. Her time was spent in youthful innocence with her brothers, around the house and farm, getting to know the call of the Gowreen-Roe, from across the marshes, rushing against the wind across the Fionán, and galloping barefoot upstream in the shallow brown water in the glen.

She climbed Ash trees to hang knees hooked over a branch to see the upside-down world. She disturbed the Jacksnipe in the marsh during an afternoon doze and silenced the Mountain Larks call. She plucked Bog Orchids and held wild Daffodils in her hand as they did a wild dance in the wind. She picked Blueberries, and Blackberries, against a background of purple heather, yellow furze, and white Ceannavaun.

The people who touched her life growing up enlarged it and set off her imagination. It was a period of ever-unfolding often magical-seeming experience. She passionately loved the bog country and gathered its richness from an early age. From May until September each year she was allowed to go barefoot, except for Mass and visits to the town of Newcastle West. She delighted in the first feel of squashy bog under her toes, and she could gallop over stony surfaces no bother.

She received her early education at Carrigkerry National School one and a half miles away under the guidance of her parents who taught there. At the age of twelve years she left to attend St Joseph's Convent in Newcastle West for one year. She did her Leaving Cert as a boarder at Scoil Mhuire in Ennis, soaking up knowledge to satisfy her growing curiosity. No county Scholarships for University was available, and with only enough money for her brother Sean's medical studies, a career in the Civil Service awaited her.

Leaving St Mary's Training College Limerick, she arrived in Dublin as an 19-year-old country girl in 1942. On arrival she threw herself into action and joined Conradh Na Gaeilge the first week as she was very interested in the Irish Language. Further education was a target as she began to mix with those enjoying University life.

That was how she met her husband to be Rupert Strong a Protestant from Hampstead in England. He was public school educated and well connected and her family liked him. He tried to convert to her Religion but could not leaving her in a quandary. She followed her instincts and moved out of the flat she shared with her brother Seán, and into her own place. This action angered her parents who arrived in Dublin to take her home, and to save her immortal soul. She tried to explain her great love for Rupert to them, but they could not understand. Rather than hurt them further, she agreed to return home with them.

After a couple of days at home her parents returned to their schoolwork leaving Ettie on her own. It was the middle of November 1942, and decision time for the rebel with a cause. She set off on her bicycle, and cycled all the way to Dublin, and went into hiding until Rupert and herself could marry. It was a very difficult time for her battling her Catholic upbringing and her family to marry a Protestant Psychoanalyst 12 years her senior.

They were married on November 12, 1943, and they were blessed with nine children. The rift with her family remained for years until the intervention of a Jesuit cousin of her mother's healed matters. Their marriage was hard work and very demanding but together they met and overcame the challenges.

Eithne Strong's first Poetry collection Songs of Living was published by Ruan Press in 1961. Padraic Colum in the (Preface) had this to say: Eithne Strong makes these poems out of a woman's way of life. This voice has the tone of one who lives outside companies. Her 2nd collection of Poetry Sarah in Passing was published by Dolman Press in 1974. Brendan Kennelly writing in the Sunday Independent wrote as follows: Not one of these poems is afraid to look at the most difficult aspects of human relationships.

Her first novel Degrees of Kindred was published by Tansy Books in 1979. Her love for the Irish Language led to her publishing Cirt Oibre a collection of Irish Poetry in 1980. Rupert Strong died of cancer in December 1984, and it took Eithne many years to get over his death. Her final collections of poems Nobel was published in December 1998.

Eithne paid a few visits to Newcastle West in her native Limerick in later years, performing at the Library for International Women's Day, and the Desmond Banqueting Hall for the Arts Festival. She was very popular and usually stole the show with her sense of humour, and sense of the ridiculous. Always promoting her native place despite such an absence away in Dublin. Eithne was suddenly called home in Monkstown Dublin in her 76th year on August 24, 1999. A sad day for all poetry lovers in the country and especially in Glensharrold where the people are so proud of her achievements.

Eithne lived a full and busy life looking after her family and pursuing a career as a writer, and up skilling along the way. She found time to attend Trinity College, Dublin in her forties where she got a B.A in 1973. From 1974 to 1988 Eithne worked as a Secondary Teacher. She has done a considerable amount of free-lance journalism and book-reviewing and was also a theatre critic for Metro-Goldwyn -Mayer.

She has given readings of her work in Ireland, England, and Canada, and has coordinated and shared the running of creative writing workshops. She achieved a lot including in 1991, winning the Kilkenny Design Award for Flesh and she was elected to Aosdana in 1996. In total she published 16 books, 5 Irish Poetry, 8 English Poetry, and 3 Fiction. She deserves to be remembered on the 20th anniversary of her death on August 24, 2019.