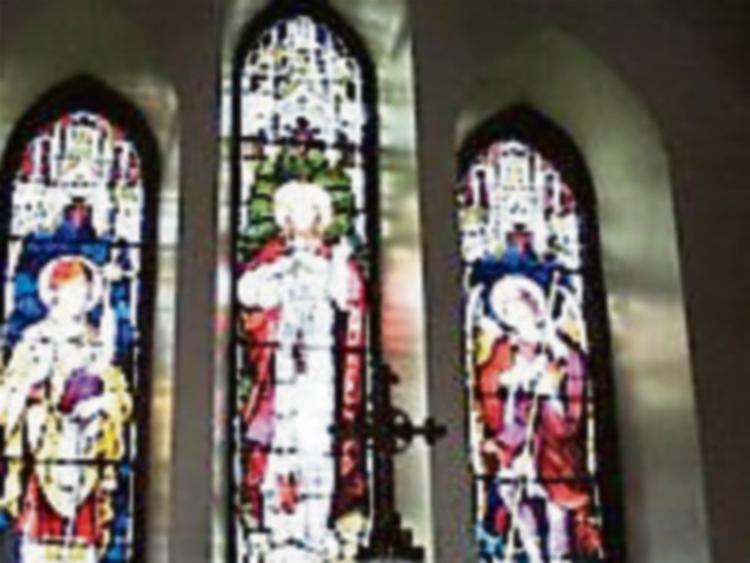 The original church in Cappagh was built in 1839 by Fr Halpin, to replace the previous church, which had been destroyed in a storm

CAPPAGH CHURCH is 180 years old this year, and the parishioners marked this milestone with a special Mass in Saint James Church on Friday August 9. It was built in 1839 by Fr Jeremiah Halpin, to replace the previous church, which had been destroyed in a storm, two years previous.

This was blown down on the 'Night of the Big Wind' on January 6, 1839. Samuel Lewis in 1837 described it as a large plain thatched edifice, built on Cappagh Hill to replace the eighteenth-century Mass house in Ballymorrisheen. Fr Jeremiah Halpin used a lot of effort to acquire the site, and he designed and took charge of the building of the new church, which was completed within a year. The foundation stone is located at the side of the church. The church was reconstructed in 1986,and Mass was held in the Community hall for six months while the work was progressing.

Cappagh, or Cappa, is a parish in the Shanid Division of the barony of Lower Connello. In the RC divisions it forms part of the union or district of Stonehall and Cappagh. Cappagh was part of the old tuath of Nantenan, in the territory of UíFidgeinte, from the 4th century onwards. Stonehall used to be in the parish of Cappagh. In 1840 Fr Timothy Foley, who had retired for a time from his parish of Stonehall now returned and for the more efficient working of the district Stonehall was separated from Nantenan or Cappagh since the new chapel was in that part of the parish. Cappagh derives its name from An Ceapach, meaning 'the tillage plot', and the parish is the third smallest in the diocese. The patron Saint is St James, and it has no resident priest at present.

Samuel Lewis described Cappagh in 1837 as being on the road from Adare to Shanagolden and had 694 inhabitants. It had 1,124 statute acres, as applotted under the tithe act. The soil in some places is good, but a great proportion of the parish is stony, and in some places the limestone rock rises above the surface, on its border next to Rathkeale, are some exhausted bogs. The village is a station of the constabulary police, and not far from it is Cappagh House, the residence of R.Peppard, Esq. The house is believed to be one of the oldest residences in Ireland. Near Cappagh House are the ruins of Cappagh Castle, built by Dermot Mac Einery, in the reign of King John.

The church was reconstructed in 1986,and Mass was held in the Community hall for six months while the work was progressing. It was officially reopened on February 15, 1987 with Bishop Jeremiah Newman concelebrating Mass with 11 priests. The parish has no pub, shop or Post Office, at present but has a lot of active clubs and organisations. Whatever the future holds Cappagh can look back on a storied past and 180 years of the present Saint James Church.

PATTERN DAY was a most important event in most parishes around Ireland in former times. It was the day the local saint was celebrated by a ‘pattern’ which was known as Pátrún, in Irish and Patron in English. It has been said that these religious ceremonies were held at the parish church under the direction of the clergy. This was ended by the widespread confiscation and destruction of churches between the years of the 1540s and the 1690s when Ireland was devastated by many wars which were mainly of a religious character. By 1700 not many parish churches remained in Catholic hands and organized ceremonies had almost entirely disappeared and Patron Day ceremonies survived as gatherings of the local people at the ruin of the local church, monastery or more frequently at the holy well.

The festivities began with religious devotions at the shrine of the saint which consisted of the reciting of a few Rosaries, Our Fathers, Hail Mary’s, and a certain prayer associated with the particular well.

The movement around the well became known as ‘rounds’ in English and Uras in Irish. The devotees walked around the shrine several times reciting certain prayers, or kneeling at appointed fixed places, often marked by large stones or rocks with the ritual varying somewhat from place to place. Another part of the devotion at the holy well was the drinking of its water, and the bathing or washing of sores and affected parts in search of a cure.

The different shrines were famed for their cures of different ailments. The making of the rounds were said in thanksgiving for past favours given and for upcoming events. Certain wells were famous for curing people who were blind or lame, and the cloths to wipe the eyes after washing was hung on a bush nearby as an offering. People who were setting out on a dangerous journey also did the rounds for a safe return.

BARRIGONE WELL is situated in the townland of Craggs, just off the N69 road in the Robertstown part of Saint Senan's (Shanagolden-Foynes-Robertstown) parish. The well which is enclosed is located beside an inlet of the Shannon River and seaweed can be seen around it. The Parish council laid down a concrete walkway in the 1960s. A covered altar has been built beside the well. There is a plaque in memory of Noel O'Shaughnessy, who was from Barrigone, on the wall of the altar shelter.

The feast day of the well is August 15. In the past, a large pattern was held on August 4 and August 15. Kevin Danaher tells us that bonfires lit up the night-time sky and the celebrations continued throughout the night. It is claimed that the well can cure many illnesses. Rags were been left at the well as offerings. It is believed that the well takes its name from the holy monk St Muirdebhair the wise, whose feast day is on November 3 (although others claim it is September 3). St Muirdebhair baptised new Christians at the well. With the passing of time, the pronunciation changed, the "M" became a "B" and thus the well was called Barrigone.

The legends about the well are many and varied. The water would not boil, the well moved when cursed and if your wish were to be granted, you would see a trout in the well. Another legend tells that the well spoke to a woman who was about to wash clothes in the well. A blind horse was brought to the well to be cured. The horse was cured but the owner became blind.

The most interesting legend about the well concerned a girl who was going to America. Before she left for America, the girl took some pebbles from the well. During the journey across the Atlantic, a fierce storm occurred, and the girl threw the pebbles into the sea. The storm abated and the pebbles returned to the well. Many old people believe that immersion in the spring could avert imminent death. The prayers that are said while doing a round of the well are Our Father, Hail Mary and Glory . Old people would pick up seven pebbles and drop one every time they completed a round at the well.

The annual Mass at Barrigone Well will be held on this Thursday August 15, at 3pm. Following the Mass, a family fun day will be held at 4pm on O'Shaughnessy's Farm in Hazelfield Barrigone. It is being held to raise funds for the Butterfly Club Rathkeale. Please support generously for this club who do wonderful work for those who attend.