Then & Now: Dancing at the crossroads

Remembering the all but gone tradition of platform dancing 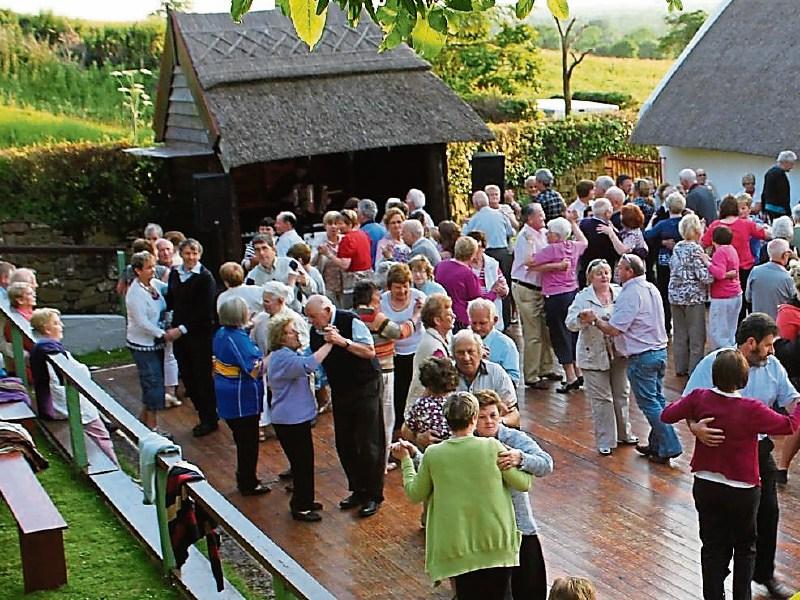 THE PLATFORMS of open-air dances were popular in country areas prior to and during the 1950s. Most people didn't have motorcars, or means of travel, so getting to the dance halls in towns was difficult, and local entertainment of all kinds was popular.

Dance platforms were usually situated at crossroads, which were the common meeting places, especially during the long summer evenings. A local musician would play the accordion or violin, while young and old got up and danced. Many of the platforms were known for miles around and people came to them from neighbouring parishes.

There was one located close to where I live, and the slab of concrete used for dancing on can still be seen. The dancers would contribute a few pence to pay the musicians, and waltzes, quicksteps, foxtrots, not to mention polkas, Father Halpin's and the siege of Ennis, were the popular dances. The dances were held on Sunday evenings, and a local person ran a small shop there, selling minerals, sweets, and cigarettes. It died out in the early 1950s, due to emigration, and better means of travel to local dance halls.

The tradition of summer platform dancing died out, but it was revived in some areas in the 1990s, including Laharn Cross, and Ballinvreena. The 21st birthday of dancing at the crossroads at Laharn Cross, Lombardstown, was celebrated on Sunday, June 2. Laharn is an active rural community situated on the foot of Baelic Mountain in the heart of North Cork. The small village with a population of less than 100 people has become renowned for its involvement in the revival of the country’s most traditional and cultural events. The village is centred around a crossroads where most of the activities take place. Large crowds will step it out on the raised timber platform to dance the night away to live music from the top musicians. The dancing can continue in Laharn Heritage Centre, as it’s only a “quick step” and a “foxtrot” away if the weather isn't favourable.

Closer to home the tiny village of Ballinvreena in Limerick, on the road between Kilfinane and Garyspillane hosts platform dancing. The village is home to the Ballinvreena Rambling House in winter, and crossroads dancing in summer from June to mid-September. Ballinvreena – The place of the fairy mansions, is a place of character surrounded by mountains and valleys of beauty that change with the seasons. Evidence of human activity here extends some 6,000 years into the dim and distant past and is cherished today by the whole community.

At the turn of the century crossroads dancing at Corbett's Cross, Ballinvreena was one of the main social activities of the area. It was an important meeting place for the young people of that time. They came to chat, and dance, and to enjoy a good night's fun. It was all free and this was important as times were hard and pocket money was unheard of. People didn't have much money to visit public houses very often, so it was the crossroads dance that became the weekly meeting place.

Information is not available when the crossroad dancing started, but it was first discontinued during the fight for Independence and Civil War era. When peace was restored it was restarted and continued until 1927. A ban was placed on this type of activity, by the local clergy on moral grounds that year. Seventy years later conscious of the accelerative return of Irish dancing to the country, the Ballinvreena community decided that the time was now right to return to its roots. This they did with an ambitious plan, help from Ballyhoura Development Ltd, and lots of hard work. Only now the venue changed from the crossroads, to Davy Quish's old style thatched cottage.

Until the middle of the 20th century, thatched cottages were a hallmark of the Irish countryside. Today, they are rare survivals from a time when they were the homes of ordinary men and women. This traditional thatched cottage in Ballinvreena, appeared in the ordnance survey of 1841,and a decade later, its rental was valued at £1 a year. Standing as the focal point of Ballinvreena, the cottage has for more than fifty years been more than just an ordinary country home, and has been singularly associated with one man, Davy Quish

Here, in times gone by, children came to buy sweets in his little shop operated from the kitchen of the house. Others gathered in the evenings for sessions of chat, poetry, card playing, song and dance.

Davys Cottage became the founding place of countless community events. A local youth club was formed there, as well as an amateur drama group. It was from Davys Cottage that plans were launched to build a community hall.

The hall, which opened in 1972, was built on land donated by a local farmer, Chris McGrath. The hall became a focus for social and cultural activities and has been a cornerstone of community life ever since. Festivals, plays and concerts have been held here regularly since the 1970’s. The most memorable night being a concert featuring The Dubliners when they were at the peak of their fame. The annual flower show is held there every July, and I recall a visit there in 2008, for a talk on Limerick Olympic Athletes.

The three-room cottage is whitewashed with its thatched roof, and smoke curling upwards from the chimney. On entering it is like a walk back into another Ireland that has disappeared too quickly. The cottage is fully furnished in the old style, and it is worth spending time looking at each piece. The old fireplace offers a warm glow and the kettle is on the boil, for a welcome cuppa, and pleasant conversation with the locals. Tea and refreshments are available for the dancers, and a shop operates.

The platform for the dancing is at the rear of the cottage, and it can cater for a good crowd of dancers. I made another visit there a few weeks ago, to view proceedings, and I picked up so literature about the place which I am using to inform readers. I picked a bad night as the platform was wet after the rain earlier in the day. However, the dancing continued across the road in the community hall to the music of Brendan Lee.

This unique event recalling our past traditions is available for another six Sunday nights with the following bands on stage: August 11, Checkers, August 18, Autumn Gold, August 25, T.R. Dallas, September 1, B.V. Sound, September 8, Moving On, September 15, Ger O'Donoghue. It is well worth a visit, and there are lots of other interesting places around to see as well.

As a child I would dream I'd a gold dancing shoe

And was waltzing the floor in a ball gown of blue

To an old Limerick song in the magic night air

In Ballinavreena's dance platform sure none can compare.