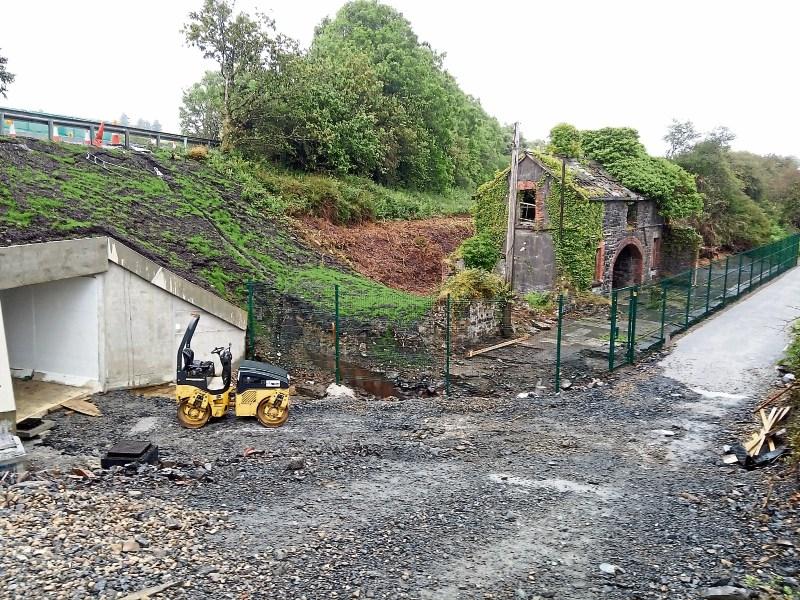 Recent picture from the work on the underpass at Barnagh, showing Barnagh Station building

ROAD WORKS and traffic tailbacks on our roads, is a daily occurrence, at present the Newcastle West to Templeglantine road is in the news, with a temporary speed limit of 60kph in operation near Barnagh. This is to facilitate the construction of a culvert underpass on the N21 which will connect the Great Southern Greenway (GSG) on the North side of the N21 to the GSG on the south side of the N21.

The underpass will safely segregate pedestrians, cyclists and other users of the Greenway from the significant traffic volumes using the N21 route.

Barnagh is best known for the song Barnagh Hill, the mail robbery, Railway/Greenway, "Sprid" and wonderful views of the lowland country. Thousands of vehicles pass through Barnagh daily, without appreciating its wonderful views from its lofty position. Barnagh at 538 feet above sea level , was the highest point of the Irish Railway system, which was reached through the Barnagh tunnel. In the closing years of the 1870s the 43-mile section of the Limerick Railway from Newcastle West to Tralee was built, and it was opened on December 20, 1880.The Railway provided a wonderful service from Limerick to Tralee until its closure in the 1970s.

The Great Southern Trail Action Group was formed in 1991 to preserve the line for leisure activities, for walkers and cyclists. Over the years it has grown to become a wonderful facility. From Newcastle West to Barnagh is a gentle 10km walk uphill all the way. This section represented one of the most challenging to construct in the age of the steam train. The trail climbs into the Rooskagh Hills leading to boglands and providing wonderful views of the Limerick Plains and the Golden Vale. The route passes Ferguson’s Viaduct before becoming a dedicated tarmacadam cycleway with excellent views which then rejoins the railway at Barnagh Station. The trains entered Barnagh Station through a tunnel which can be visited along a stand-alone 1km section of the old railway.

A lot of banks, and post offices were robbed around the country during the 1970s, by gangs with a grievance against the state, and Barnagh will always be associated with one of the largest, the cash van robbery which took place on June 7, 1978. It was an old-style robbery and £430,000 in cash was taken, and nobody was ever charged with the crime. The cash van was coming from Abbeyfeale to Newcastle West on its weekly delivery. The robbery was well planned with the robbers using telephone maintenance men and vans as a distraction. The armed men detained a local family that day and used their house to hide out before the robbery. The other members pretending to be a repair crew diverted all the traffic coming from Abbeyfeale down the old Barnagh road.

When they saw the cash van and the Garda escort car, they quickly reopened the main road sending both into the trap they had prepared before closing it again. The two vehicles had to slow as they approached the narrow double bend at the Railway bridge. They held up the van here, and quickly transferred the cash to their escape vehicles. Roadblocks were put in place all over West Limerick, North Kerry, and North Cork, and extra Gardai were brought in to help in the search. No money was ever recovered, and the matter was discussed in the Dail.

There are several stories about the "Sprid" of Barnagh, who held sway around the same time as the White Boys, (1800 to 1820) and she was as feared as their leader Captain Jack Rock. Moll O'Shaughnessy was her name and she brutally murdered her husband and unbaptised child, for which she paid the full penalty for the crime. She returned to the area as a spirit in the form of a lady dressed in white or as a big black greyhound according to different versions. Her patch was from the Railway bridge on the old Barnagh road to the gully at the boundary of Ballymurrogh and Donakenna, as Spirits are not able to pass over spring water.

A man from Castleisland had a terrifying experience there, at a time, motorcars had not yet appeared on the roads. The chief mode of transport being the long car which plied from town to town. A man called Cronin was a driver of such a car, and his regular route was from Castleisland via Abbeyfeale, Newcastle West to Rathkeale. It was in later years that the railway was constructed to link those towns.

It was Christmas Eve and night had fallen when Cronin left Rathkeale on his return route, and he had no passengers. After passing Newcastle West it began to snow, and climbing the hill at Barnagh, a blizzard was raging, making driving conditions very difficult. After climbing the hill, the horses started to gallop, as they knew they were on the home run. Cronin's seat was called a dickey seat, open to the sky, wind and weather.

The night was pitch dark and Cronin could not see where he was going, but he trusted the horses who knew the route. Suddenly the reins were almost jerked from his frozen hands. The horses gave a mighty surge forwards as if they had been given a crack of the whip on their rear ends. Then suddenly he heard one of the most blood -curdling screeches ever to blast the ears of man. From a grove of trees flashed a figure that looked like a tall woman in a long white gown.

She had a veil over her face and there was a queer kind of unearthly glow over everything, and the horses and long car shone like beacons. She grabbed hold of the horse’s bridles, and both were now in a mad gallop with their ears flapping on their mane. She kept screaming and dragging on the horse’s heads. The blizzard raged on and it was the worst he ever experienced.

Cronin started whipping her but could not break her grip on the horse’s heads. Meanwhile the horses were galloping like mad and out of control. Cronin could see the whiplash going through her, yet he kept whipping away until his arm went numb. Yet she kept flying along still hanging on to the horse’s heads until they reached the gully. Suddenly she gave the same scream and shot like a flash over the fence and he never saw or heard of her again.

The people were so terrorised at her attacks that they contacted the local priest Father Shine, who met her on one of her nightly appearances. He read a prayer from his Breviary and sprinkled Holy Water over her, and banished her, with a penance of having to drain the Dead Sea with a bottomless Thimble.

Barnagh Hill is a song credited to T.D.Shanahan or Tade Gowran about the majestic scenery from the top of Barnagh Hill. I will conclude with three of the four verses.

Oh, do my eyes deceive me or is it but a dream

The Golden Vale of Limerick with its coat of verdant green

A rarer sight was never seen or never will again

It's that Golden Vale of Limerick you can view from Barnagh Hill.

While standing on the summit of that ancient Danish Rock

Newcastle West before me lies Goat Street and Phelans Mill

You can view them all from Curtin's lawn at the foot of Barnagh Hill.

You can view them all from Curtin's lawn at the foot of Barnagh Hill.