Then & Now: Music by the Feale has never been sweeter 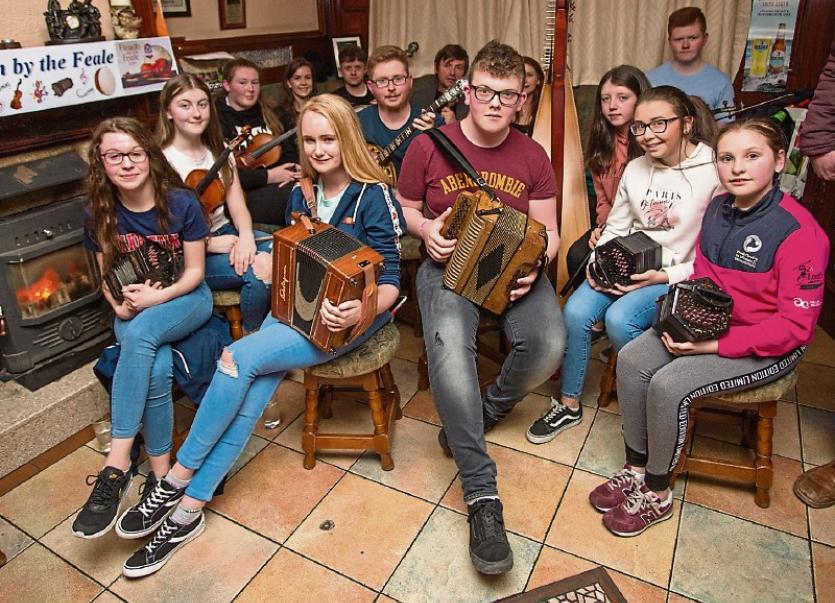 Fleadh by the Feale takes place from Thursday, May 2 to Monday, May 6 with various events taking place in Abbeyfeale

PEOPLE LOOK forward to the May Bank Holiday weekend and the Fleadh by the Feale Festival in the town of Abbeyfeale. From humble beginnings it has grown to became one of the most successful events countrywide.

Abbeyfeale each year is home to the Fleadh by the Feale, The Garry McMahon Singing Weekend and the West Limerick Singing Club. Entertainment is also provided in the Glorach Theatre, Fr Casey's GAA Clubhouse, and in the local lounge bars. The town has also played host to the County and Munster Fleadh Cheoil. It is no surprise then to see the people flock to the town beside the River Feale each May for top class music song dance and mighty sessions.

Irish traditional music did not always enjoy the popularity it presently enjoys. Before 1950 this music was considered unfashionable and was played only for the enjoyment of family and neighbours, at house dances, weddings and Wren nights. Our musical heritage was in danger of being forgotten, and something needed to be done to address it. On Saturday February 24, 1951 a meeting was held in the Midlands Hotel Mullingar which changed the whole outlook for Irish traditional music. Those that attended were passionate about preserving the music song and dance of our national culture. They formed an organisation to promote all traditional music and musicians, and it became known as Comhaltas Ceoltóirí Éireann.

Two music festivals were held in Monaghan, and Athlone, to promote its aims and new branches were set up in different areas of Ireland. The Gaelic League promoted concerts and Abbeyfeale was one of the best around with the cream of talent performing. On Sunday December 13 Abbeyfeale hosted a Festival of Music in the Technical School, and traditional musicians and singers who were prepared to form branches from around Munster were invited.

The event was well covered in the Limerick Leader -Abbeyfeale Festival of Music was a day out for those who are among Ireland's most valuable possessions, her traditional musicians and singers, those men and women who work patterns of colour into the happy fabric of homespun life, and who break out into song and music as naturally as does the soaring lark on a Spring morning.

In March 1962, Sylvester Conway, Munster President of C.C.E. attended the formation of a Comhaltas Branch in Abbeyfeale. The officers elected at this meeting were: Uachtarán Canon Patrick Lynch, P.P. Cathaoirleach Frank Dennison, Rúnaí Beirtí Ó Nunain, and Pádraig Ó hAirtnéada, Cisteoir Eibhlín Ní Chonchubair. In 1973 and 1974 the County Limerick Fleadh Cheoil were held in Abbeyfeale, to continue the progress.

Céilí and Old-Time Dance, In the Abbey Ballroom, Abbeyfeale,

Fleadh by the Feale came about following Abbeyfeale playing host to the County Fleadh Cheoil in 1993 and 1994. They were two outstanding events, so a committee was formed to run their own traditional festival in 1995. They received generous financial support from Guinness Group Sales Ireland Ltd and it took place from Friday April 28, to Monday May 1. It opened that Friday night with traditional entertainment under the shadow of the Fr Casey Memorial in the Square. It was followed by a traditional Busking Competition in the street. Commencing at 10pm Radio Kerry went out live from the Rendezvous Bar with a special edition of Fleadh by the Feale.

On Monday from 3pm Marching Bands Competitions for Primary and Post Primary Schools was held, and they marched from the Convent grounds through the town. The festival proved to be a huge success, with large crowds attending and great entertainment provided. The All Ireland Bone Playing Competition commenced a year later, and now attracts a large audience. The committee members in 1998 were Dan Murphy, Maureen Murphy, Philip Enright, Anne Marie Dennison, John O'Sullivan, Pat Quille, Nora Quille, Kieran Curtin, Celine Mc Nally, Mary O'Connor, Sean Healy, Denis Daly. Half of the original committee are still involved after all the years.

The Sunday night concert has been a highlight each year, with top class acts like Sharon Shannon, Kilfenora Céilí Band and Four Men and a Dog performing. This is the 25th year of the festival and a top-class event filled programme has been put in place. The West Limerick Singing Club are holding a special session in the Ramble Inn on Friday evening with special guest Deirdre Scanlon from Monagea. Deirdre now based in Co Clare sings a fine version of Dearest Home on the Banks of the Feale.

When Abbeyfeale and music are mentioned in the one sentence great exponents of that craft roll of the tongue. The late Dan Murphy from Knocknagoshel and a successful businessman in the town he made his home, was one of the founding members and a past chairman. His wife Maureen, and son Kevin are still involved in the committee. He played the button accordion and his life revolved around encouraging others to participate and to get involved. He was also very active in the promotion of business and associated with different groups and projects. His three sons Sean Donal and Kevin and daughter Eilís followed in his footsteps.

Dan's son Donal has carved out a very successful life in music also as an accordion player of note. He has been a member of the group Four Men and a Dog since 1990. They have performed all over the world and released many successful albums. He is also part of the Sliabh Notes trio, and a successful businessman. Abbeyfeale is also home to the Mulcahy family of Mick Michelle and Louise, who are amongst the country's foremost musicians. Father Mick a native of Brosna in Kerry was born into music, and he started playing the accordion at an early age. His two daughters are multi-instrumentalists and the family have toured and performed in concerts all over the world. They have also released several solo and family albums over the years.

Philip Enright is one of the best traditional singers around and a regular performer at all local events. He has released a few CDs which contain a lot of local songs, which he sings so well. Eibhlín Broderick is a young singer who released a fine CD a few years ago. It contains My Sweet River Feale composed by Bryan Mc Mahon from Listowel. For traditional music lovers the town of Abbeyfeale is the place to be this May Bank Holiday weekend.