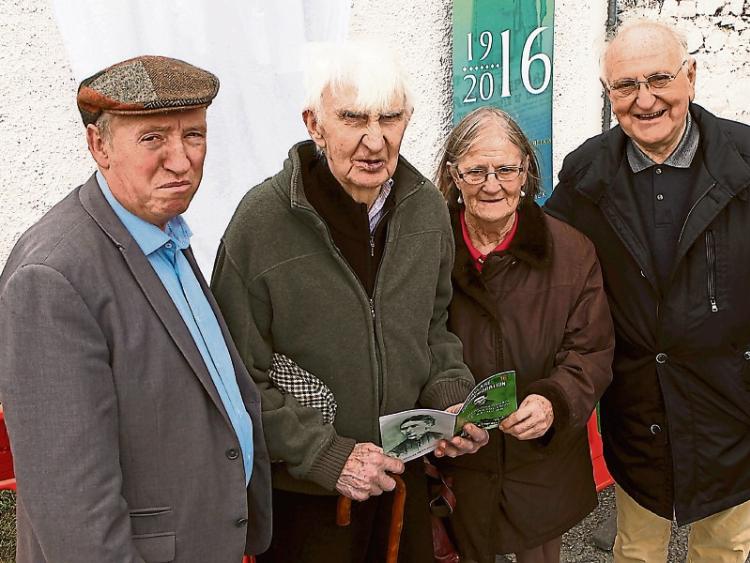 FRANK PHELAN from Walshestown, Castlemahon was one of Limerick's best-known historians and storytellers, and his passing on Holy Thursday last has left a huge void in that department.

He was a tireless community worker, and a promoter and preserver of our old traditions. He had a light hearted approach to life, and he was a people's person, who was warm and engaging. Farming was his vocation and he kept readers up to date on events around the farmyard community and world affairs as a parish correspondent. Frank was a noted Gael who won major honours with his club during his playing career and loved to reminisce about games from his youth. He loved history and was life president of the Feohanagh/Castlemahon History group and a yearly contributor to their parish annual.

My first meeting with Frank Phelan was at Liston's Lounge Bar Castlemahon on February 1, 1991, at the launch of By the Upper Deel, a GAA history of Feohanagh-Castlemahon. Frank was joint editor of the book with Mike Dwane and what a wonderful publication it was. It was launched by Micheál O'Muirtheartaigh, the legendary Gaelic Games commentator. I got both to autograph my treasured copy, along with the late lamented Gael, John Carrig. I knew Frank was a special person after spending a few minutes in his company. This became more apparent as our meetings increased at various launches over the years. A love for the land, nature, sports, music, politics and people shone through in conversation and print.

His weekly input of notes to the Weekly Observer/Vale Star was essential reading for all sections of the community. His recall of events, people, and places, from distant times past was truly amazing, and like vintage wine he got better with age. He was a storyteller par excellence who kept his readers' interest from the first sentence to the last word. The material was clear concise and interesting in an entertaining way recalling neighbours, and olden times. Young readers especially could gain so much knowledge about the Ireland of their parents and grandparents' time by reading his material.

Frank's writing has graced so many publications over the years, beginning with the parish's own journal Feohanagh/Castlemahon Annual in 1982. Over the 37 issues his contribution has been immense and a pleasure to read. His articles embrace many different areas of country life, with gems and nuggets of information sadly now being lost in a fast-paced modern Ireland. We should be all so thankful to Frank for writing them down and making sure they are there for future generations to observe and enjoy. His great memory and recall from his fields of gold days are treasures we should acclaim and cherish.

Frank has been interviewed on radio on numerous occasions and it has made compulsive listening. Jimmy Reidy, Tony Browne, Pat O'Donovan, Willie O'Regan, Jerome Scanlon and many others have been privileged to sit across from him as they took a trip down memory lane. His facts, figure and dates mixed with tales and yarns, amid a reservoir of gushing words have fascinated the listeners.

All aspects of life came alive as he recalled and discussed a life rich in culture and tradition. A love of nature and the land came through in his youthful and boyish enthusiasm to entertain. He also sang and told stories at Rambling Houses, including Knockfierna, and contributed to their journal.

Frank's love of sport shone through in his writing about Gaelic Games, boxing, horse and greyhound racing and Manchester United his favourite soccer team. By all accounts he was a fine player in his day winning many honours with Feohanagh and Knockaderry. At an early age he followed in the footsteps of his father Bill and continued to give over 20 years service on the playing fields. He won two county junior hurling medals with Knockaderry in 1947, and Feohanagh in 1954. He had the honour of captaining Limerick in the 1955 Munster Junior Hurling Championship. Frank was also a good football player and he won West and County titles with Castlemahon in 1965.

The county final was played in Bruff on April 10, 1966 and they defeated Monaleen by 2-8 to 2-2. Frank retired on a winning note after the final after giving 21 years great service to the club since he first donned the white and blue in a minor football game near Glenwilliam Creamery in 1945. In later years he took up squash and used his hurling skills to win honours.

Fr Tim Culhane wrote a lovely tribute to the Feohanagh hurlers who won the County Limerick Hurling Championship in 1954. It was to the air of the Valley of Knocknanure, and it was sung with great pride and passion by many singers, especially the late Pat Cagney who was an award-winning vocalist. All involved were praised over the five verses including Frank and his brother Tom. Verse three concluded with:

And for the Phelans, Tom and Frank dare any man subdue

Their brilliant play won many a day for the Feohanagh White and Blue.

They are also mentioned in the final verse:

So, from Clonmore down to Walshestown we'll sing their praises high

With Tom and Frank in senior rank our lads will do or die.

Frank travelled a good deal over the years, and his reports about people and places made good reading from his master pen and delightful presentation. He was a member of the history group that published the parish annual each year unearthing many gems of local history that could have been lost otherwise. His brilliant memory and recall proved invaluable when working on the history of Gaelic Games in his native parish.

Frank has left behind him a vast amount of material that good to say has been recorded on West Limerick 102 and been published in newspapers, magazines and journals. One of my favourite pieces is The Walshestown Road (1957) I include the first and last verses.

There's a road I shall cherish forever

From its memories I never can part

It's far dearer to me than silver or gold

It's a road that winds through my heart

Long a favourite haunt of the travelling clan

Tis there they oft made their abode

But now they must seek for pastures anew

Far away from the Walshestown Road.

I like to look in when the evenings are long

And the sun it is sinking to rest

At the boys who are playing at hurley and ball

And the cuckoo then singing his best

When darkness is falling all over the land

There falls from my heart a great load

With my pipe glowing bright I am happy tonight

As I stroll on the Walshestown Road.

Frank was born on Thursday December 1, 1927 and one of the big hits that year was Among my Souvenirs. What a souvenir Frank has been to us all with the glint in his eye and the mischievous grin which attracted like a magnet as the words poured out followed by laughter. Our paths crossed on many occasions over the years, and I would always gather a gem of historical interest from Frank. He was generous with his time and knowledge, and he will be sadly missed by us all but especially his wife Brigid, children Anne and Padraig, and extended family members.

His pen has run out of ink, but his life achievements will remain fresh in the minds of all who called him a friend. Sleep softly Frank, your contribution has been enormous.

21,000 people signed up for the Good Friday Team Limerick 5 clean up

The trolley crisis and overcrowding in hospitals was getting no better

The clinical directors of the UL Hospitals Group wrote an open letter.

All around the county people were enjoying an Easter walk

April so far has been the month of the horse and golfer Tiger.

The adults were basking in the heat and some drinking cool cider.

The gardai warned of an Easter crackdown on mobile phones

The canvassers were all out seeking our support and preference votes.

In April more jobs were announced for Limerick city

No such announcements in the county -such a pity

Bruce Springsteen the US singer is nicknamed the Boss

The swallows had arrived with a downward dive

Followed by the cuckoo-it was good to be alive

People in Newcastle West witnessed the carrying of the cross

The scourge of rural Ireland was Minister Shane Ross

And the Munster hurling championship was looked forward to soon

All five greyhounds set off around the first bend at a cracking pace.

Bags and pickers were provided which was so kind

People all over set off not knowing what they might find

The people they covered a lot of meters and yards

Amongst the rubbish was some glass coffee jars

Rubbish collected that came from the windows of the passing cars

Thrown out on the way home from the chippers and bars.

The weather was lovely and warm during Easter week

Like olden days was the morning fog and heat

All the walking was tiring and hard on the feet

It was great to take a break and rest on a seat.

JP McManus and others sponsored the Limerick clean sweep

Drivers travelled around collecting items inside in a jeep

Rescuing rubbish from hedges and from dykes so deep.

All sizes shapes and designs were displayed on tins

They all fitted nice and tight in the wheelie bins

After the annual clean up all communities wins

With pubs open people can afterwards enjoy a few gins.

All the bags were knotted tight when full

Of take away cartons, plastic bottles and cans of Red Bull

When the job was finished everywhere was looking so neat.

The big Limerick clean up is now over for another year

But the people who continue to litter will not stop, I fear.