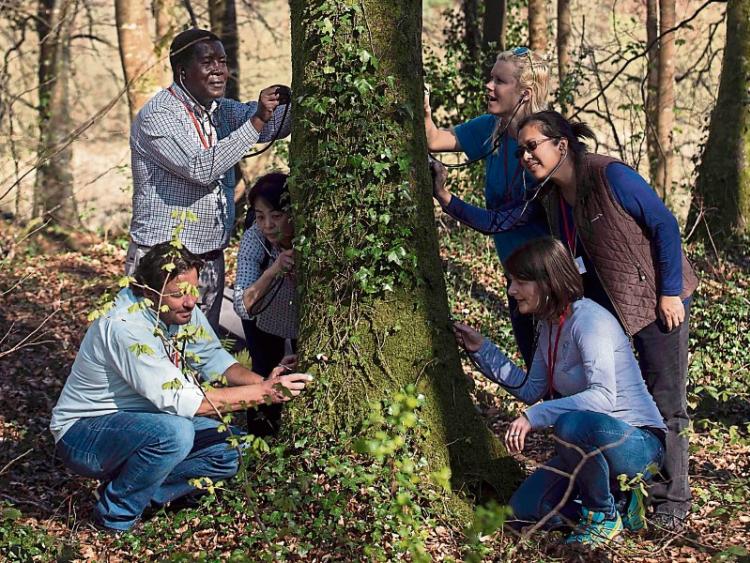 Rachel Geary Learning about Forests (LEAF) Coordinator for Ireland with delegates from around the world listening to trees event in Castleconnell. Pictured were Johleen Koh, Malaysia LEAF National O

NATIONAL TREE week commenced on Sunday last and will run until next Sunday, April 7. The week-long celebration is about communities coming together to celebrate trees. This year's theme is about planting for our planet.

Trees play a significant role in our climate change strategy by soaking up carbon emissions and in the sustainable wood resource they provide. Trees improve air quality, provide shade that makes streets cooler in the summer, increase biodiversity, provide food and shelter for wildlife, reduce local wind speeds and reduce the effects of flash flooding.

Without trees, life on earth would be unbearable. The Tree Council of Ireland are inviting people to get involved in local activities with events around the country including tree planting ceremonies, forest and woodland walks, workshops, woodturning displays, talks, poetry readings, exhibitions, competitions and tree plantings. Trees are part of our national treasure and they are enjoyed by humans, various wildlife and numerous species of birds, and they are good for the environment.

There are social and economic reasons to plant trees as well as the environmental benefits. Since it was introduced over half a million trees have been planted throughout the country during Tree Week. By doing something as simple as planting a tree, everyone can play a part in making a difference to our efforts to live more sustainably and bring about countless benefits, many of which will have a long-term impact in times of climate uncertainty.

Ireland was covered in ice and snow and had no trees during the Ice Age about 12,000 years ago. As the land started to warm up and thaw out the work done by the birds and animals coming in from Britain, led to the growth of our native trees. They transferred the seeds and nuts around and the wind blew in many other lighter seeds from abroad. From my young days I recall the following lines:

Are the four best trees that ever grew.

We associate the Ash trees with the making of Hurley's and the phase ‘’the clash of the ash’’ and the good heat it produces. It grows in woods hedges and hillsides and its purple flowers open before the leaves show. The tree faces an uncertain future at present due to the ash die back disease around Ireland.

The Elm tree produced lovely timber for furniture and wood turning but unfortunately it was wiped out many years ago by the Dutch elm disease. The poet Gerald Griffin mentions the Elm which is a very tough timber in the following lines about Adare

There winds the Maigue as silver clear

Among the Elms so sweetly flowing,

Wild roses on the bank are blowing.

The Yew tree was something of a mystery to us as we didn’t see it growing nearby or what it looked like. In time we learned that it was a coniferous tree and that it could be found in churchyards, and burial grounds. It was the sacred tree of the druids and it could live to be a great age. The oak is a majestic tree and its timber is much prized for its beauty, its hardness and durability. At one time great Oak woods covered large parts of Ireland. County Limerick had very extensive woods mainly Oak-woods but that is a story for another day.

The forked branch of timber from the Hazel tree was used by diviners to source the location underground of water before boring a well to supply water for households. Carving names on the bark of a tree with a penknife was popular when I was growing up, but this romantic custom is seldom seen now. The wood from the Blackthorn tree is used to make walking sticks and it has become one of Ireland’s best-known souvenirs at present.

THE LATE Liam Flynn from Abbeyfeale was a craftsman who elevated woodturning to an art form. He was mainly self taught on the lathe, developing his own unique style, creating beautiful items from locally sourced wood. Most turners worked with seasoned wood, but Liam used fresh green wood adapting to the different shapes and contours. Liam ebonised (a process that blackens the wood) many of his pieces, which was another unique feature of his work. He had a terrific eye for form, texture and concept in working with oak, and an extraordinary understanding of how wood behaves. He was so skilled at what he did with wood that he was happy in his own skin, and Liam never said a bad word about another wood artist.

In 2011 his work was pictured on a special edition Irish postage stamp. His work is on permanent display in collections in the National Museum of Ireland, the Victoria and Albert Museum London, and the Minneapolis Institute of Arts. Sadly, Liam passed away on April 10, 2017 aged 47. Liam was a generous , caring, humorous, and interesting person, who enjoyed Jazz music, cycling and fishing by the Feale in his spare time. The following is an appreciation by Emmet Kane - Thoughts of Liam which was published in the Summer 2017 Irish Woodturners Guild.

I first met Liam at an Irish Woodturners Guild Seminar in Sligo in 1989. Liam at that stage had developed his own style. The best way to describe Liam is he was the first child of modern woodturning of Ireland. The Irish Woodturners Guild was founded in 1983 by Liam O'Neill, Willie Stedmond and many others. Over the years the Guild has invited demonstrators from abroad to attend their annual seminar and in the early years of the guild , Liam attended the seminar meetings along with wonderful woodturners from the USA like David Ellsworth and Merrill Saylan who influenced Liam to get his own style.

Liam discovered early in his career that he had to exhibit abroad to get his work to a bigger audience. In the early 1990s Liam was one of the first Irish makers to exhibit at the highly respected Chelsea Craft Fair in London and SOFA in Chicago. This gave him the opportunity to get his work into Collection. Liam was highly skilled as a craftsman but also had a wonderful eye for balance and form. I found a functional Ash bowl that Liam made at a demo in my workshop in 1996 and I don't think he made many bowls over the years, but this vessel had its own style. Liam had turned to top as a slight angle. If the new generation of crafts people want to learn anything from Liam Flynn apart for his wonderful vessel and forms, it is practice; practice to build up the skills to create wonderful work. Ireland and the World has lost a wonderful craftsman and artist and it was an honour to know you Liam.

On the second anniversary of Liam's untimely passing a commemorative night will be held in the Glórach Theatre Abbeyfeale to celebrate Liam's achievement and a life well lived on Friday April 5. He was a great supporter of the arts and was a regular attendee of the Glórach Theatre always offering interesting feedback on events that were run there.

The doors open at 7pm, and an exhibition of Liam's work will be on display , and a short film documenting how he went about the process of woodturning will be screened. From 8pm there will be a short presentation by Yvonne Mc Enery, Joe O'Keeffe, and Mary Leahy. A great way to celebrate National Tree Week, and the wonderful contribution of craftsman Liam Flynn, and all are welcome.