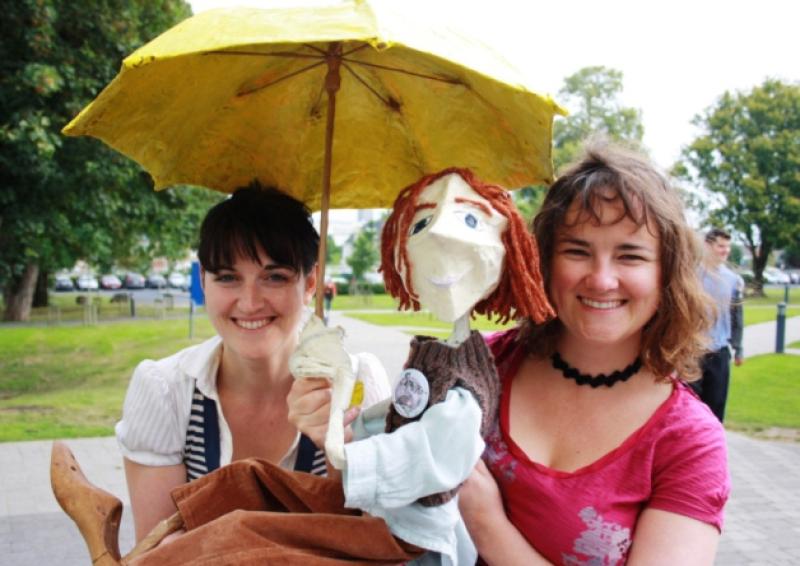 IN a rehearsal room in Limerick, under an elaborate set of ropes and wires, a journey of imagination is taking place.

IN a rehearsal room in Limerick, under an elaborate set of ropes and wires, a journey of imagination is taking place.

It is week two of rehearsals for Spun, Emma Fisher’s beautiful puppet theatre show for children, produced by her company Beyond the Bark Puppet and Installation Theatre, and directed by internationally-renowned puppeteer Liz Walker.

The show is part of the Bualadh Bos children’s festival, being run for the month by the Lime Tree.

Emma, from Castleconnell, a designer, writer, puppeteer and performer, is kneeling with fellow performer and composer Ann Blake to run through a scene in the play, which is based on the book written by Emma and illustrated by Thorey Mjallhvit H. Omarsdottir.

A puppet peeps around a screen, climbs up to a web and abseils to the floor in the ensuing scene, as bathtime becomes a flight of fancy through central character Ciaran’s imagination, accompanied by his friendly spider Piedva.

“Shall we run that take off again?” asks the director.

Emma, an Irish Times Irish Theatre Award nominee who has been working in the area of puppetry since 2007, was advised to seek out the “Rolls Royce” of directors when putting in her application for funding for Spun.

“He said to make a wishlist and pick whoever you would like and go for them, and then work your way down. She said yes,” laughs Emma.

Walker has brought some “extra little bits of drama into the story”, she explains.

“The book was written as a lullaby which is fine for sending someone off to bed, but you can’t do that in a theatre, so Liz is having more moments of excitement and we worked this morning on where we are going to involve the children and keep them excited, bringing the energy up and down.”

Walker says that the story lends itself well to the production.

“I think it is quite a magical story and with puppets you can create magic and it can seem very real, the toys can become real, the set can become a living thing,” she says.

Of Emma, she says: “She has so much energy and dedication and she just gets things done.”

For Emma, it is an “amazing” opportunity to work in her home city.

“We have never been funded before. It is just fantastic. And to have such a great team and be able to pay everyone for what they do and to be able to collaborate with such lovely people.”

Spun is just one a much broader programme for the Bualadh Bos children’s festival, being run by the Lime Tree. It also features work from Lyngo Theatre, Fidget Feet, Kidding Ensemble, Slingsby, Fibin and the Experiential Theatre Company, while Branar’s The Way Back Home is one of the highlights.

- Spun runs in 69 O’Connell Street from Tuesday to Thursday, October 14-16, as part of the Lime Tree’s Bualadh Bos children’s festival. See Lime Tree for full details of the festival.