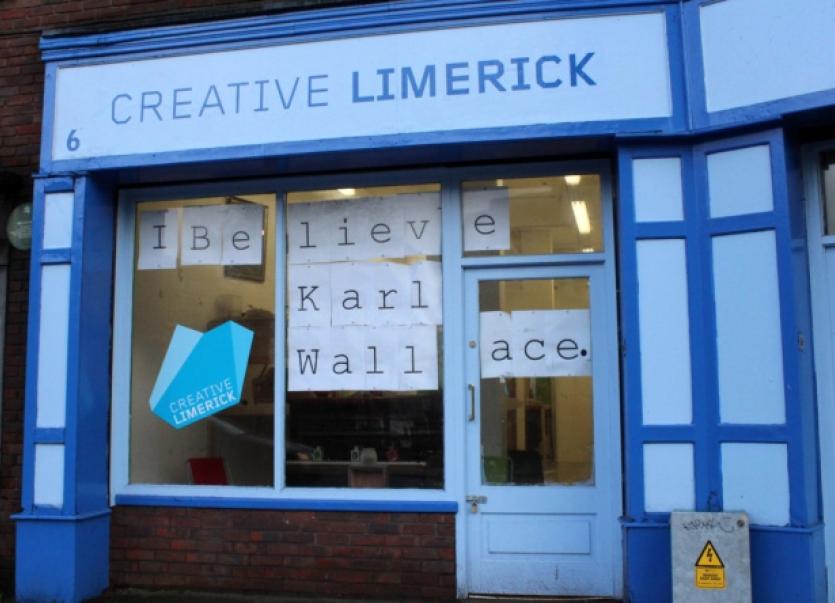 INTERNAL wrangling over an artistic space owned by Limerick City Council spilled out onto the streets this week.

INTERNAL wrangling over an artistic space owned by Limerick City Council spilled out onto the streets this week.

Local actor Kevin Kiely, well known from his stints in The Dark Knight Rises and World War Z with Brad Pitt, was unceremoniously booted out of his Creative Limerick space after erecting a poster he was told “was not in keeping with the contract he signed”.

Mr Kiely put up a poster saying ‘I Believe Karl Wallace’, a reference to the now former artistic director of Limerick City of Culture, who resigned under a cloud last year, citing a breakdown in communication with his superiors.

When Mr Kiely returned to his Rutland Street-located Creative Limerick space - an innovative scheme managed by the planning department City Council to revitalise urban spaces - he found that a padlock on the door had been removed, as had the poster.

“What has happened here is, I was sitting having a coffee and the people in the space next door, who were moving out, saw somebody breaking the lock of my front door, and then removing the sign, which was a piece of text that I created,” he explained.

“I was due to leave today, I had my own lock on the door. I have made some personal choices during my tenure, because of the disagreement I have had with how the city run arts organisations. I am fully prepared to have Creative Limerick discuss what I did wrong, because I did it on purpose.”

Standing nearby was Creative Limerick project worker Mhici NiMhurchu, who admitted that she had broken the lock and removed the sign.

“It is mostly about the fact that he is at the end of his contract, but the poster itself was not in keeping with the contract he signed. And that was not really considered acceptable.”

She added: “Steps needed to be taken.”

The actor, from the Ballysimon Road, said the message behind the poster was “bigger than the individual”.

“I believe that what is wrong with creativity in this city is that it is perceived in a way that belittles the arts. There has been a lot of coverage in the media at large, that sets the politicians against the artists, and what that does, I feel, is alienate the artists from the community.

Creative Limerick - above the person that was contacting me - were putting pressure on me to be here a lot, to give me time constraints. Art is not made in a space, art is made in the minds of people. This is a space where you can combine that altogether.

“I suppose my point is that I felt my hands were tied, and I was getting pressure to be an artist in a way that was appeasing to Limerick City Council, as opposed to it just being about the art,” added the Limerick actor.