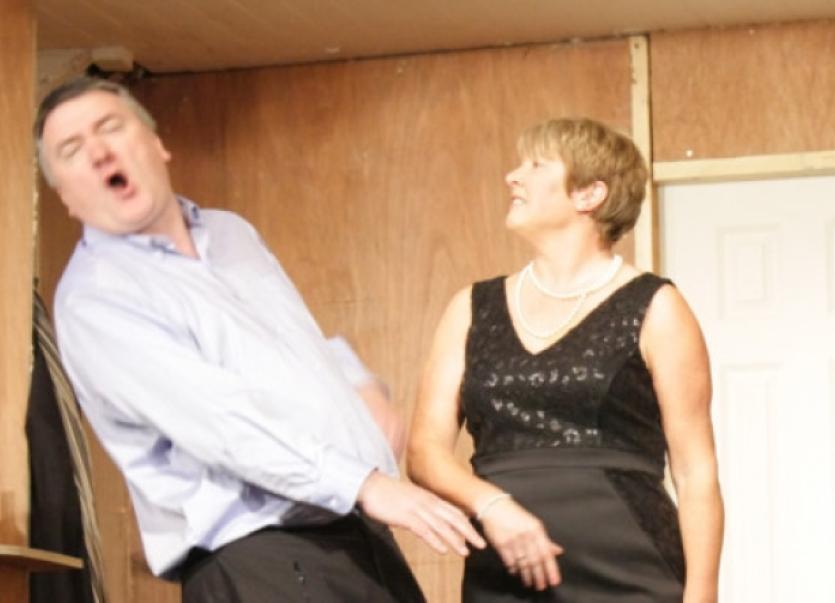 Sheila Deegan, arts officer for Limerick City and County Council recalls her first experience of going on stage in a drama production.

Performing, she says, “is a very brave thing to do”. And she’s right. Actors expose not only a character’s vulnerability but also their own, leaving themselves wide open to the response of an audience, for better or for worse.

“It can either throw you or it can really buoy you up in terms of an experience,” Sheila explains.

“I remember the first time being desperately nervous and needing to go to the bathroom all the time - it was just pure nerves. Once you went out there on stage, it was such a reward - the positive response from the audience.”

In Limerick, scores and scores of people, of all ages, occupations and backgrounds are all chasing that high – the buzz of the applause that rises from a satisfied audience.

In the notes section of this paper each week you are sure to find some village or town advertising their homegrown production. At this time of year however, the number grows and, this year, it appears, the people of county Limerick are treading the boards harder than ever before.

From Ardpatrick to Athea, they are busy, fine-tuning their character’s mannerisms, accents and idiosyncrasies.

“It is great to see it,” Sheila notes. “I myself was involved with the College Players many years ago here in the city.

“It’s a fantastic opportunity for people. Performing is a very brave thing to do but there are so many other aspects to putting on a drama piece like getting the programme ready. Even just having the proper committee in place - you don’t realise until later in life that all of those things give you life skills as part of the process and, of course, you are having great fun in the process.”

The interest of the Limerick public in Irish theatre, Sheila says, “is quite amazing especially in the classics such as the ones that are going to be on in Knockaderry like Juno and the Paycock.

“People know those so well and they are very receptive to new interpretations. The Abbey were in town during City of Culture and they did the classics - they did Sive and the retelling of these plays reinforces people’s sense of themselves and being Irish and of a time and of a place.

“It’s an amazing achievement to do those plays and to do them well and to invest so much time and energy and to really believe in the power of theatre.”

While it is difficult to confirm just how many theatre groups there are in Limerick city and county, the hope is that there will be a review carried out as part of Limerick’s bid to become European Capital of Culture in 2020.

In 1976 Willie Carr first took to the stage in a drama production. Apart from an absence of one, maybe two years, he has always played a part in the local theatrical offering.

This Thursday night the Martinstown man will take to the stage at Ballinvreena Community Centre to play the role of Jack in the Canavour Players production,Thy Will be Done.

“Basically, what it is about is two brothers who were farming in their younger days. Their father left one of them living in an out shed while the other brother got the whole lot. There are a few twists - a woman may be involved as well,” Willie smiles.

Other dramas and drama festivals taking place in the county over the coming weeks are as follows:

On Friday, January 30 at 8pm, Friars’ Gate host Kitty in the Lane written and performed by Tipperary playwright and actor Áine Ryan. The play had great success at Edinburgh, including a five star review from theatre magazine Broadway Baby. International critic Paul Levy from Fringe Review described Áine as “a wondrous actor”. Kitty in the Lane tells the story of a 20- year old girl living in an isolated cottage in rural south west Ireland with her elderly father. The play is a dark drama, unlocking Kitty’s perspective of life as a young woman in a lonesome environment, but is also filled with comedic relief through Kitty’s witty observations and anecdotes of her own reckless activity in the past. Tickets are priced at €12/€10.

On Friday, February 6 at 8pm, Counter Culture written and performed by Katie O’Kelly will be performed at Friars’ Gate theatre. This production focuses on the world of fashion retail - a labyrinth of sequins, hangers, sales targets and bunions where “the customer is always right”. It follows four shop employees over one day on the shop floor. Tickets €12/€10.

The Arra Players are putting on a very exciting play at the end of January. The play The Memory of Water by Shelagh Stephenson, is the story of three sisters and their partners who gather at the home of their recently dead mother and revisit the past in poignant and often hilarious way. The opening night, a special charity performance, is Thursday, January 29, in the New Hall, Castlemahon. Tickets are €10 at the door, and for that, you get a token to choose which charity gets your money. The four charities are Cystic Fibrosis, St Vincent De Paul, Brothers of Charity, and Rathfredagh Cheshire Home Newcastle West.

The drama in Ardpatrick kicked off again this Wednesday and runs until Sunday, February 1. The Hillside Players proudly present “Don’t Dress for Dinner” by Marc Camoletti. This hilarious production is set in a holiday farmhouse somewhere in the south of Ireland. Bernard plans a romantic dinner with his mistress in conjunction with his best friend Robert, when his wife Jacqueline changes her plans and decides to stay for dinner. This leads to a very interesting dinner party, leading to an array of confusing, hilarious and if somewhat romantic events. The booking line is 087-765 5771 and will be open from 5.30pm to 7.15pm on each of the performance weeks. Curtain up at 8pm sharp. Admission is €10 per adult and €5 per child.

Granagh Players’ production this year is The Buds of Ballybunion by John B Keane. Ballybunion is a very familiar spot for everyone in Munster and it holds memories for all of us - sunny days, ice creams, periwinkles, freezing water, sand in the sandwiches! The play is a musical comedy based on the farmers’ annual two-week holiday, when the harvest was completed. This particular motley bunch have been meeting for the last 30 years. They stay in a lodging house where they were offered a room and a fire or stove to cook on.

The Buds may not be as well-known as other Keane literary works, but it contains a mix of, history, social comment, nostalgia, song, dance and storytelling. Above all it is very entertaining.

Play dates are January 30 and 31 and Sunday February 1 at 8pm. Admission is €10 for adults and €5 for students. There will be a shop and raffle nightly.

Continuing the rich tradition of drama in this West Limerick village, Athea Drama Group are ready to tread the boards with their 2015 production of the hilarious comedy It’s The Real McCoy by Tommy Marren. Set in rural Ireland in 1964, the play focuses on the life of 68-year-old Madge Mulloy who has spent more than 40 years struggling to survive on a small farm with her only daughter Maura.

Widow’s Paradise by Sam Cree will be staged at 8pm at Banogue Parish Centre on Saturday and Sunday February 7 and 8 and runs again from the following Thursday, February 12 until Sunday, February 15 inclusive.

The third West Limerick Drama Festival takes place in Knockaderry over two weekends,running for seven nights opening on Thursday March 5. The running order is as follows;

The adjudicator for the festival will be Paul Brennan from County Clare.

All performances will begin each night at 8pm sharp. The opening night March 5 will commence at 7.30pm when the festival will be officially opened by special guest, a Limerick woman, Kay Sheehy, who is a producer with RTE. Admission €10.

If we have failed to mention your production and you would like it featured on the Limerick Leader, email details to news@limerickleader.ie