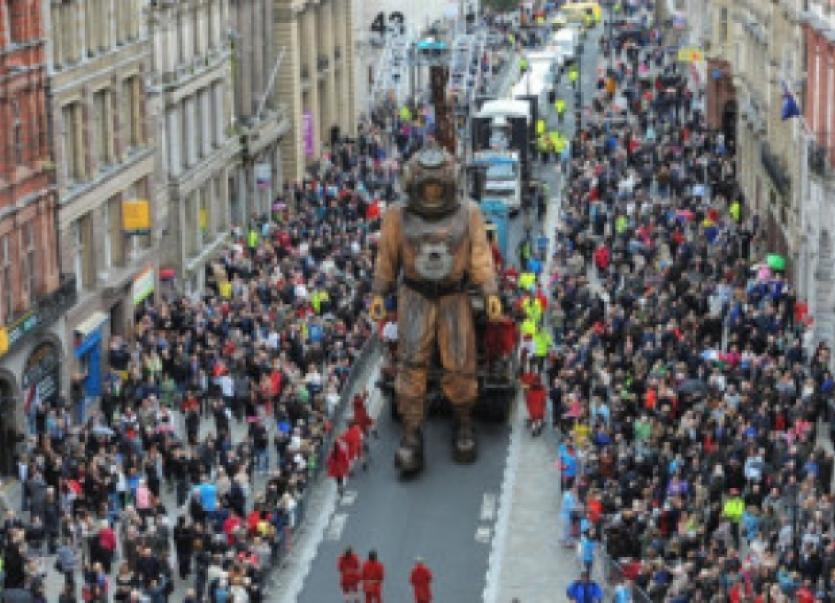 LIMERICK could be transformed by “the world’s best pageantry company” if plans for Royal de Luxe come to fruition.

LIMERICK could be transformed by “the world’s best pageantry company” if plans for Royal de Luxe come to fruition.

The €1.6m show is believed to have been tentatively ‘green-lit’ by the board of City of Culture at a meeting last week - but is entirely dependent on revenue being raised to pay for it.

The spectacular street theatre event, which has never been performed to less than 400,000 people, was apparently a source of friction between now departed artistic director Karl Wallace, who saw it as the centrepiece of his programme, and the board.

Interim CEO Mike Fitzpatrick has been “strongly urged” by several board members to press ahead with Royal de Luxe, with it likely to take place in mid-September.

The cost of the project will not come from the State’s allocation of €6m, it is understood.

Karl Wallace explained after his departure that the fee to be paid to Royal de Luxe - “without question the world’s best pageantry company” - was estimated at €315,000, with the remainder to be spent locally.

“This €1.2m was to be spent mostly on local employment and as a result, (would be) of benefit to the local economy and the people of Limerick,” he said, criticising arts minister Jimmy Deenihan’s description of it as a “puppet show”.

A spokesperson for City of Culture said that there would be no comment “on any discussions had at board level”.

“In the event that decisions relating to programming are finalised, they will be communicated in due course by Interim Head Mike Fitzpatrick.”

Mr Fitzpatrick said last week that “nothing is in or out in terms of the original programme”.

However, the Leader has established that Royal de Luxe has now been included in the updated programme, which requires a significant level of additional private funding.

Sources say it was “never off the table” but strong representation from some board members has increased support for it.

“The exact words I used to the board was that the child in me would love to see this and the adult in me has some doubts about our ability to pay,” he said.

“The child has won to the extent we have kept it on an amber light. The project has not been decided yes or no because of the resources available to us, we can’t afford it.”

While the board never officially ruled it in or out, it now appears more likely than ever that it will go ahead.