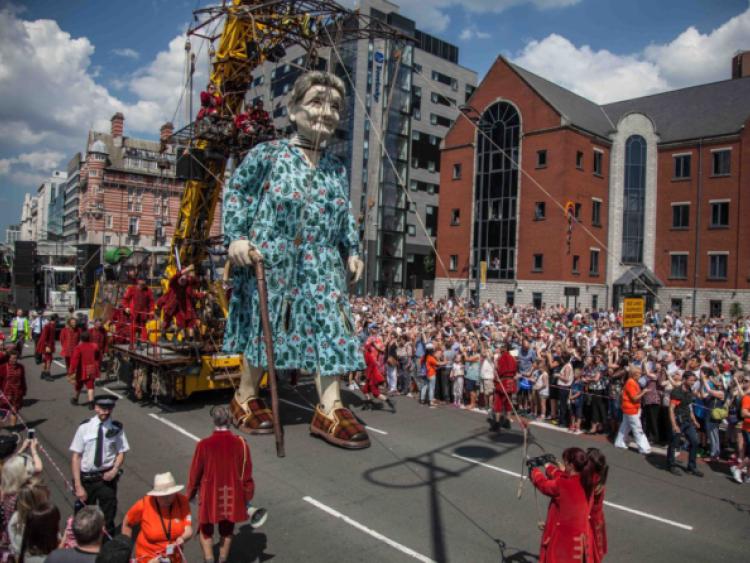 Royal de Luxe brought the city of Liverpool to a standstill last week, taking giant steps through the city. The Limerick Leader’s Alan Owens was there to see the event that’s bound for Limerick.

Royal de Luxe brought the city of Liverpool to a standstill last week, taking giant steps through the city. The Limerick Leader’s Alan Owens was there to see the event that’s bound for Limerick.

IT is a Friday morning in Liverpool and the sun is shining. Outside Lime Street train station, the city is at standstill, and yet it is only 10am.

It is a normal work day, kids should be in school. But they are not.

People lined thousands deep have waited for hours in the busy intersection above Liverpool’s main pedestrian shopping drag, winding around the massive train station and toward St George’s Hall, anxiously awaiting the awakening of a 30 foot giant.

‘She’ is the Grandmother, Royal de Luxe’s new creation, a massive, otherworldly marionette, the centrepiece of the French company’s street theatre show, designed specially to commemorate the centenary of the First World War in Liverpool - and for City of Culture in Limerick.

The Granny is half French, half Irish, and she will be ‘coming home’ to Limerick in September, one of just three places - Nantes, Liverpool and Limerick - that Royal de Luxe will perform this year.

Slowly, as the clock ticks closer to 11.30am, there is movement toward the sleeping Granny, who is reclining in a wheelchair, and snoring loudly.

These are the Lilliputians that with great Gallic flair and heart warming tenderness slowly wake the Granny from her slumber, help her onto her feet and encourage her to talk.

Amid scenes of elaborate pageantry, she speaks through a translator to the crowd and starts her gentle, three hour stroll through Liverpool city centre.

Essentially the Lilliputians enable her walk; swinging one after another on ropes to move her feet, 70 in total working in sync. It has to be seen to be believed, frankly,

Behind, a massive truck with huge speakers blasts out the specially composed soundtrack, French post-rock band Les Balayeurs du désert pumping a beguiling mix of funk, soul, disco out over the heads of the crowd.

And boy have they come. Hundreds of thousands line every street, every bridge, overpass and vantage point. People crane heads out of office blocks, restaurants, shop windows. Two waitresses stop with trays in hand at a hotel window and gaze in wonder.

At various points the Granny - part of a show that also includes a little girl and a dog, alas, who will not be travelling to Limerick - stops to interact with the crowd, to spit, to fart - vanilla essence if you please - and at one hilarious point, to wee right there on the street.

She is led in all things by the charismatic Jean Luc Courcoult, founder of Royal de Luxe and mad, creative genius. He wears exotic glasses, a pink jacket, a blue shirt open at the nave, striding through the streets.

In the midst of this scarcely believable street performance - which concludes for the afternoon at Albert Dock after a mammoth procession through the city - Courcoult is not keen to speak to the media, preferring to walk in front of his creation or stand on the truck with the live band, waving and dancing in front of the crowd.

Later, his daughter Margot, herself an active ‘Lilliputian’, will eloquently explain that the giants - or puppets - resolutely remain “living entities, even for us.

“We would never talk about them in terms of machines, we talk to them in terms of characters, I don’t want to say people because they are not, they are giants, and you miss them when you don’t see them for a couple of months,” she says quietly.

“It is because we lose ourselves in it as well, it makes it very special. In character we are there to serve the giants, and you can just imagine servants growing up with a family, you still have a special connection. So I think that is what we are to them.”

The idea is both that the watching crowds will forget that the swarm of Lilliputians exist, and yet also that they will be distracted by their theatricality, interwoven into a specially tailored story fabricated for each city’s performance.

“We are wearing bright red, and are shouting, but we still get people to this day saying ‘so how does she move’? You still get it, even though we are really visible.

“I think it is something, because we are not trying to hide it, you sort of forget that. And also, to give a puppet its soul, you have to take the soul of all the operators and I think it is one of the reasons the giants are so powerful.

“So it is really something that is important that we are shouting and are present, but yet you almost don’t see us.”

Key personnel involved in Royal de Luxe’s have been to the city several times on scouting missions, working up a tailor made story for the city’s three day event in September, which will cost around €1 million to produce.

Crucially, something in the region of a million people turned out in Liverpool for the second appearance of the giants in that city - and City of Culture bosses hope upwards of 200,000 will do the same in Limerick.

Wendy Simon, assistant mayor and cabinet member for culture and tourism, says that it is not just the considerable economic factor that boosts any city that hosts Royal de Luxe, but also the accompanying swelling and outpouring of joy and pride that accompanies the economic boost - estimated at an incredible £32m generated by the 2012 appearance of the street company in her city.

“The economic value is absolutely huge for an event like this,” she explains as we walk in front of the giant.

“But I always say as well, it is not just the economic value, if you look around here at these crowds, the social and well-being value, what it does to people, having that joy, seeing their city, enjoying seeing it on national and international TV, just how their communities really engage with art and culture - that is really important.

“I would say to the people of Limerick, really do look forward to it, get out there in your thousands, enjoy it, it will be a real spectacular event for you to see and you will really love it the way the people of Liverpool do.”

Standing on the street with her three children is Tullamore woman Margaret Ferguson, who lives in Liverpool with her husband.

While she says she “couldn’t get a parking space for the last two hours”, Margaret exclaims that the Grandmother’s procession is “spectacular”.

“Everybody has been anticipating this for weeks now, and I think they have come from far and wide to see this spectacular event. The sun is shining, everybody is in good form, smiles on every face,” she explains.

“I didn’t know she was going to Limerick, fabulous. Best of luck to her. Limerick should enjoy it, it is spectacular event all over the weekend.”

The Limerick show has been in development for more than 12 months, the product of the vision of the now departed City of Culture artistic director Karl Wallace, who recognised the potential in Royal de Luxe, the ‘wow factor’ of a show that will spend three days in the city, moving from the centre to the suburbs, sleeping overnight, creating a magic that children and adult alike will never forget.

Some 150 volunteers are needed, almost half of which are recruited.

Nearly 14 “key personnel” have already been recruited, explains assistant technical director Marie Breen. About 45 will make up the specific team, with 65 of the French company and ten people locally recruited to join the Lilliputians.

“I have been working on the event now for the last couple of months and I have been seeing photographs and the odd clip from it, and now today I am really excited,” she says.

“You get an emotional reaction when you see it and it just ups the excitement around the event.”

The woman tasked with managing this giant logistical undertaking is Iseult Byrne, project director for City of Culture.

She has lived, slept and breathed this project for months, and with six weeks to go, is in Liverpool to meet the French crew again and see how it works.

“Royal de Luxe have been coming to Limerick on repeated visits, technical visits, research visits - they have been in Limerick a lot,” she says.

“They love the city, they have had a great time when they visited, but have also worked very hard, they have met with historians and playwrights and archivists. The people of Limerick that they have met, some of them in bars and restaurants, some on the street - to just learn more about Ireland, about Limerick, not just its history because it is not a historical show, but just its influences.

She admits readily to being “very excited” at the prospect of the show, but the process has also been a draining one. There are many surprises for the Limerick show that cannot be given away, but the basic show will consist of the Giant arriving by train and departing by boat, with 72 hours of free entertainment in between.

It promises to be magical.

“I don’t want to give away a lot of the bits and bobs that happen along the way but people will fall for this Giant, they have human qualities, the movement, the blinking of the eyes, the turning of the face, all of these things are obviously at a scale,” says Iseult.

“She is a Giant, but they are of a person too - she reminds me of my granny and it will be the same along the way for everybody else.

“There are about three gathering points a day and at those points there is auxiliary stuff which I won’t give away, but there are other things going on, and it is just magic.

“It is very carefully devised to bring us into that land where we know it to be true, even though it isn’t and we can - especially as adults - turn off the practical brain and just pretend that we are like children and it will happen to the most cynical of us, and I can guarantee that.”

The people of Liverpool have taken the Irish granny to their hearts, now it is Limerick’s turn. We trust they will.