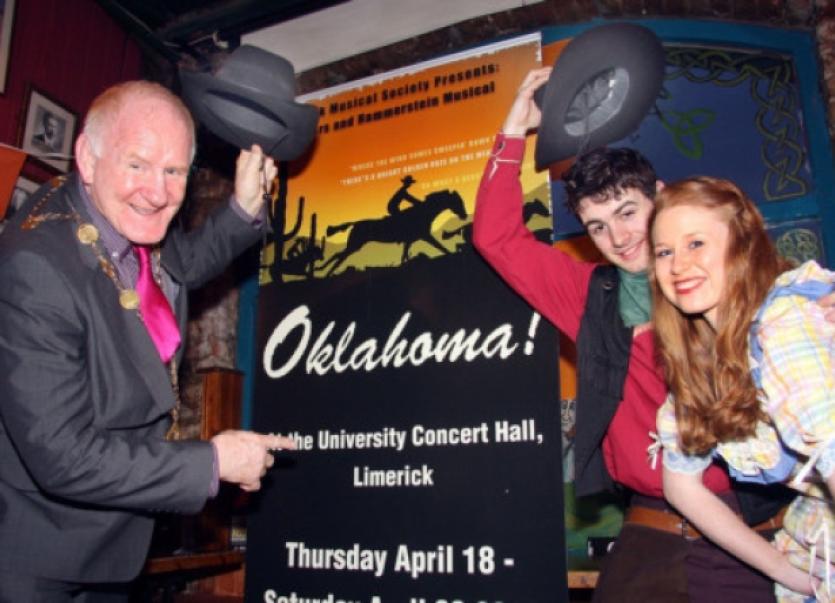 LIMERICK Musical Society are to perform the classic Rodgers and Hammerstein musical Oklahoma for their spring production in the University Concert Hall.

LIMERICK Musical Society are to perform the classic Rodgers and Hammerstein musical Oklahoma for their spring production in the University Concert Hall.

The much loved musical, telling a tale of romance between cowboy Curley and farm-girl Laurey on the wind-swept plains of the American state, will be staged in the UCH for a three night run on Thursday, April 18 to Saturday, April 20.

Mayor of Limerick Cllr Gerry McLoughlin joined the cast and crew from the award-winning society at a launch in Dolan’s this week, with the company declaring the assembly of an “all-star Limerick cast” for their latest production.

Oklahoma will feature Michael O’Dwyer as Curley, Orla Walsh as Laurey in the title roles.

While Michael hails from Carrick on Suir, he came to Limerick in 2010 to study in Mary Immaculate College and has featured in several of the college’s productions.

Orla, a Bunratty Castle Soprano Soloist for five years, has appeared with several other societies including Centre Stage, Shannon Musical Society and the Cecilian Musical Society.

“Oklahoma is one of the all time great musical plays of the twentieth century,” said spokesman Gerry Ryan. “The music is refreshing and upbeat and the songs contain clever lyrics which are full of humour.”

Popular songs from the musical include the title track Oklahoma!, Oh What a Beautiful Morning, People Will Say We Are In Love, The Farmer and the Cowman and Many A New Day.

Oklahoma will be directed by Des Henn, while the choreography will be taught by AIMS award-winner, Niamh Twomey and the musical direction will be looked after by Maire Keary-Scanlon.