Royal de Luxe ‘will go ahead’ for Limerick City of Culture 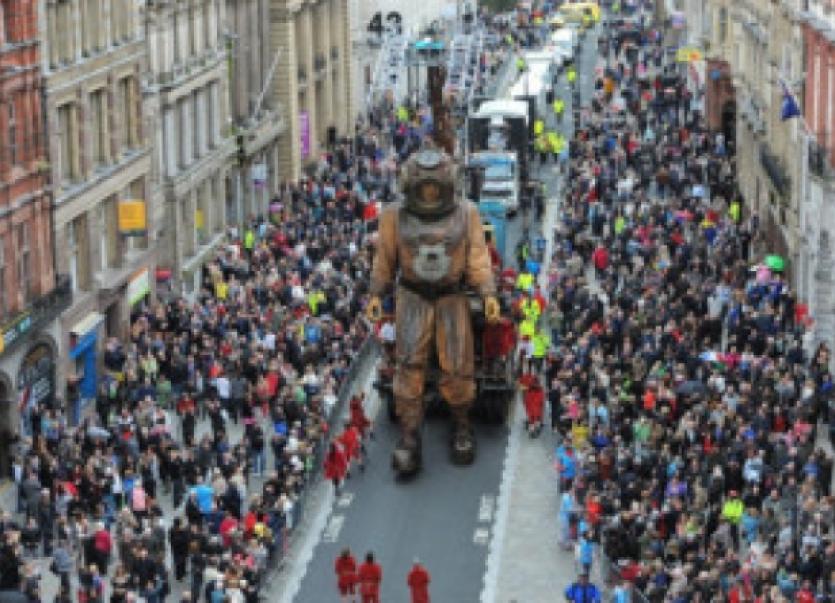 THE Limerick Leader can exclusively reveal that Royal de Luxe, a massive street show never performed to less than 400,000 people, will go ahead in September as the flagship event of City of Culture.

THE Limerick Leader can exclusively reveal that Royal de Luxe, a massive street show never performed to less than 400,000 people, will go ahead in September as the flagship event of City of Culture.

The project, costing in the region of €1.6m, hung in the balance after the departure of Karl Wallace, who saw it as the key event of the year, possessing the ‘wow factor’ that would put City of Culture “on the map”.

However, despite some initial reservations, largely to do with the overall cost of the project, most of which will be spent on local infrastructure, the board has decided to press on with the event for the first weekend in September.

The Leader has learned that Royal de Luxe - performed by a French company, billed “the world’s best” - will rehearse ahead of its staging in the city in the Culture Factory in Castletroy, which has just finished hosting a 15-show run of Fuerzabruta, playing to over 13,000 people.

Several sources have confirmed that Royal de Luxe will go ahead, but a spokesperson declined to comment, saying that in the event that “decisions relating to the programme were finalised, they will be relayed in due course”.

One source said there was a “determination” that Royal de Luxe would go ahead as the “key moment” for the year. An announcement is expected soon.

Meanwhile, 17 applications were received for the advertised director position overseeing City of Culture.

Of these, a shortlist of “very strong” candidates has been drawn up, with interviews to take place next week.

The process will be overseen by the HR department in UL, which, it is understood, is providing a pro-bono service at City of Culture’s request.

It is not known if interim CEO Mike Fitzpatrick has applied for the role, but it is thought likely. He declined to comment when asked about the job recently.

A member of UL’s HR department will sit on the interview panel along with board chairman Pat Cox, Orlaith McBride of the Arts Council and Louise Donlon of the Lime Tree Theatre.

Several sources said that there was “100% unanimity” among board members that the position had to be advertised, unlike the process which saw Patricia Ryan appointed as CEO last year.

The board members were also in close agreement about which candidates would be selected from the 17 that applied and will now go forward for interview.

It is hoped that one of these shortlisted candidates will be put forward for selection by next Friday week’s board meeting.

Meanwhile, City of Culture has claimed that the success of Fuerzabruta brought about a “35% increase in trade among Limerick businesses”.

The show’s producers declared themselves “astounded by the outstanding facilities made available to them in the Culture Factory”, formerly the Dell factory and now a venue for the year.