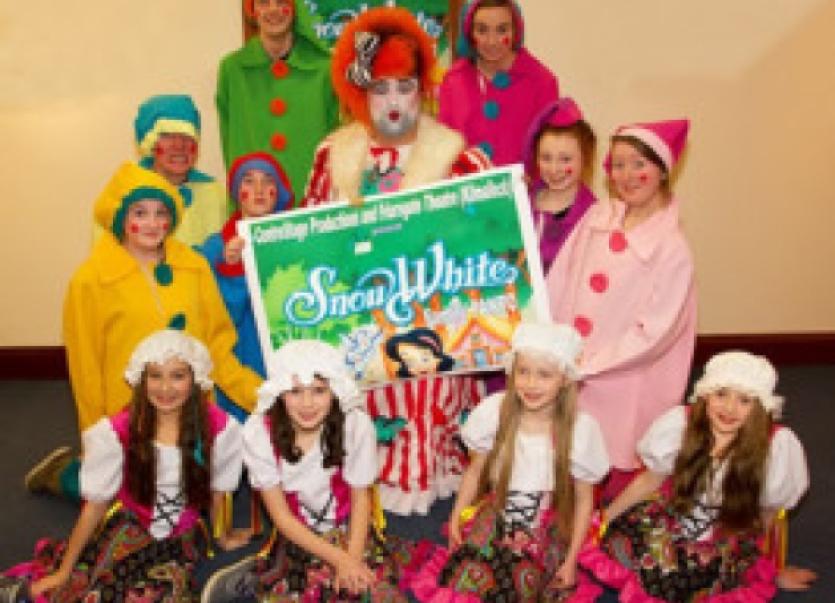 MAYHEM and hilarious madness will descend on Friars’ Gate Theatre in Kilmallock this weekend with the opening of the popular pantomime, Snow White and the Seven Dwarfs.

MAYHEM and hilarious madness will descend on Friars’ Gate Theatre in Kilmallock this weekend with the opening of the popular pantomime, Snow White and the Seven Dwarfs.

The traditional tale has all you would expect - the beautiful Snow White, seven funny little men, and a wicked queen, but the creators of this particular production - CentreStage Theatre School - have added a few extra twits in the form of a magical mirror with an attitude problem, a very humpy servant, and a perfectly handsome prince who’s just a bit too full of himself.

“It’s crazy and great fun,” explained Eleanor Bennett from Bruff who plays the part of Queen Gumboil, the evil queen who plots to kill the lovely Snow White.

While she has starred in several productions throughout her acting career, this is Eleanor’s first pantomime – “a baptism of fire” as she puts it.

“I’m involved in theatre for years but I’ve never done pantomime before – this is my first time. The children are absolutely marvellous. I’m sure it’s going to be mayhem because of the volume of people and it’s all so fast.”

Eleanor, who was involved in theatre in school, became reacquainted with the art when her own children started attending school in Lough Gur where the Honey Fitz Theatre is located.

“I got involved in the drama group there,” she explained.

Down through the years, she has worked with various production companies and played a wide variety of roles. “It’s all local groups that I have worked with. I did my own one-woman show but that was about 15 years ago now. I did Shirley Valentine and I toured with that.”

In terms of this production, she says she appears to have a licence “to do whatever I like”.

“It’s over the top, totally, utterly and absolutely. Richie Ryan is producing it. He said: ‘Go to the boundaries and if you go too far, I will pull you back’.”

And pantomime being what is, there is loads of audience reaction.

“There will be mentions of local people and local places. It is for children of all ages. They love the interaction and the baddies. There are some beautiful characters in it,” said Eleanor.

The production features children from a range of local areas as well as CentreStage Theatre School.

“There are a lot of local children with Limerick Youth Theatre in Kilmallock involved and the Honey Fitz in Lough Gur. They seem to be from Kilmallock, Charleville, Effin – all around there,” said Eleanor who described Friars’ Gate as a “super” venue for such a production.

Snow White and the Seven Dwarfs opens this Friday, January, 17, at 7pm, and runs on Saturday and Sunday at 3pm and 7pm. It will run over the following weekend at the same times.

Tickets are priced at €12.50 per child and €15 per adult. Family tickets including two adults and two children are priced at €50. See www.friarsgate.ie for more.