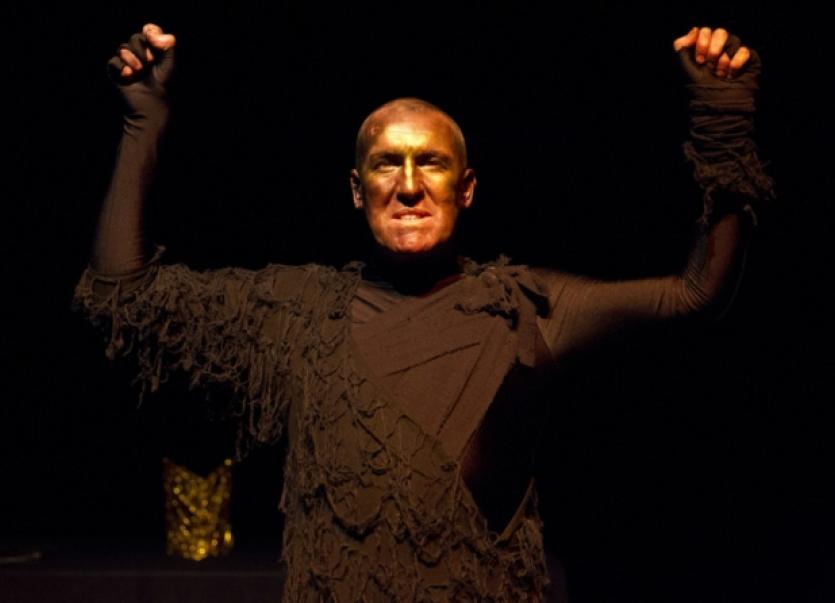 AN extraordinary piece of new writing by Pat Kinevane and Fishamble Theatre Company is to get a world premiere in Limerick’s Lime Tree Theatre as part of City of Culture.

AN extraordinary piece of new writing by Pat Kinevane and Fishamble Theatre Company is to get a world premiere in Limerick’s Lime Tree Theatre as part of City of Culture.

Underneath, which Kinevane worked on with Fishamble and director Jim Culleton over the past two years, gets its first outing in Limerick this month.

Kinevane, star of Silent, a poignant, one man piece that focused on the travails of a homeless man as its central character, returns with a blackly comic, rich and vivid tale of a life lived in secret - an examination of a life lived on the fringes of society.

Playing the central character, a woman struck by lightning as a girl whose life is subsequently shaped by the disfigurement, Kinevane muses that the idea for the piece - in one of his first interviews ahead of the debut of Underneath - was influenced by “the growing obsession in the world with the aesthetic of beauty”.

“I think it came from something I was writing years ago and I didn’t develop properly, it was an idea that I had and this character arrived in my head,” he says, his lilting Cork accent rising sharply.

“I was really fascinated by how many people that I know in my life, male and female, that are almost in a fickle way cast aside because of their outer shell.

“It is not even that they are disfigured, but there is a sort of a cult - that we don’t address - of a certain shell that we should have. Why don’t we just allow each other be and look the way we want to look, rather than being threatened by it in some way?”

The character ponders beauty and a life shaped by her outer shell in an emotional but quite humorous piece. It marks Kinevane’s third solo collaboration with Fishamble, an association that stretches back to 1993 when he first appeared with the company, who focus on new writing.

“It is her story really of how she got to this point in her life, the different tragedies and comedies that happened along the way,” says Pat.

“I hope people laugh at it. It is the way I look at the world, the way she looks at the world, you can’t lie down all your life, because nobody is going to listen to you. You have to be able to laugh at yourself and accept your lot and move on and the only way to do that is through self-satire and healthy self loathing.

“I think the momentum in it, or my passion in it, is to talk about what is on the surface, how we can be - as a society - very cruel when people don’t fit into a category. How do you survive if you don’t fit into that category? If you are judged on the outside of you constantly?

“This character isn’t self pitying at all, she looks at things and is able to laugh at that obsession in the world with beauty and the fashion industry and fascist perfection.”

For Kinevane, he says it is an honour to be staging Underneath for the first time in Limerick. Although he hails from Cobh, he is “half Limerick”.

“I am very excited because I probably wouldn’t have initially saw myself doing this until the new year, but when I was approached and Fishamble were approached, I thought it was nice,” he says.

“Because my late father was from Limerick - Adare. I thought, ‘this is it, I will do this for me da’, in honour of my father for Limerick City of Culture. He was a very proud Limerick man.

“So this is great, it is a great opportunity for me and an honour for me to do it for him.”

Underneath runs in the Lime Tree from December 3-6