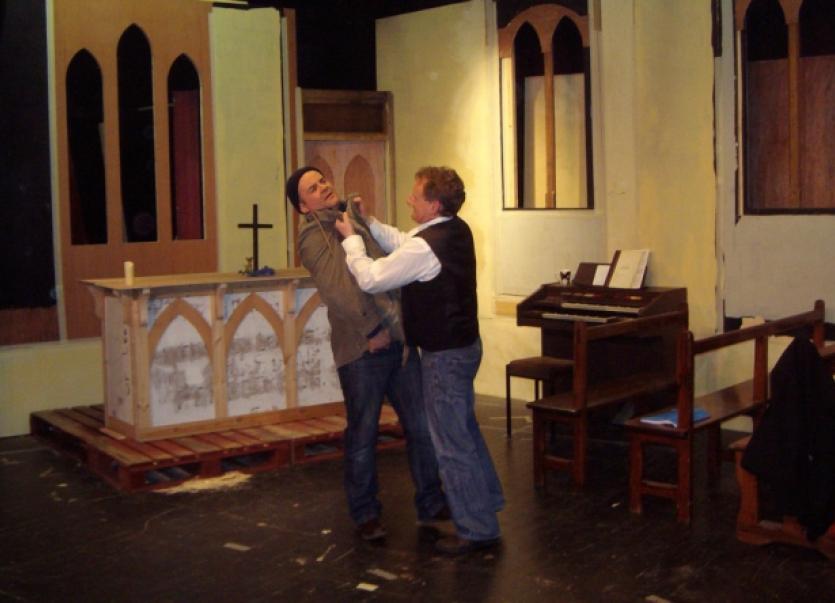 And actor Nora Relihan, the woman who first brought John B Keane’s Sive to life on stage, will be the adjudicator for the festival which will feature six plays and run over two weekends.

“This is our second festival and last year, we were flying by the seat of our pants,” Johnny Corkerry, of the Knockaderry Drama Group said at a reception to launch the festival this week. However, he added, they had received fantastic support from the Limerick County and City Arts Officer, Sheila Deegan for this year’s festival. And the back-room organising team in Knockaderry had also made everything run more smoothly.

“I am an am-dram person myself,” Sheila Deegan told the crowd who had gathered for the launch, explaining that her association with the College Players had begun her journey into the arts world. “I don’t have the courage anymore to be on stage,” she added, “but I think it is a fantastic testament to drama groups who really immerse themselves not just in putting on a play but also a festival.”

“It is the ultimate in bravery to stand up in front of your parish and act,” Patrick O’Donovan TD said while Cllr Michael Collins praised drama group members for their dedication and commitment and also praised the support of their families. It would be far easier to stay home by the fire on a winter’s night, he said.

The festival will open with this year’s production from the Knockaderry Drama Group, Moonshine by Jim Nolan.

The play has a case of seven and is directed by Mary Geaney. It is set in a seaside town where the Protestant church is about to be closed and where the local undertake is determined to stage a version of Sheakespeare’s A Midsummer Night’s Dream. It is the group’s 20th production since it was estalished in 1997 and the cast includes names familiar to the parish and to drama goers throughout West Limerick.

It also has probably the youngest stage manager in amateur drama circles in the country.

At just 16 years old, Rachel Collins is already an experienced hand when it comes to stage-management. Last year, and again this year, Rachel, a student at Hazelwood College and the daughter of John and Noreen Collins, has taken responsibility for stage managing the Knockaderry Drama Group.

Last year’s production, The Highest House on the Mountain by John B Keane was a big challenge. Rachel acknowledged. John B, she told the Limerick Leader, always has much more detail on the set.

This year’s production, Moonshine, is challenging in its own way. “You could do what you wanted,” she explained about the two-act play which has sets of a funeral parlour, a beach and a church.

The key thing, she revealed, is to make sure the actors are ready to go on stage. And of course, to make sure the set and all the props are exactly how they should be. “You do have to be very well organised,” she acknowledges, but adds that she has the support of an assistant stage manager and a prompter.

The curtain went up on Moonshine in Knockaderry Resource Centre on Sunday night when it was well received.

The group returns to the stage this Friday night as the opening performance of the West Limerick Drama Festival. It will be followed on Saturday night by Banagher Drama Group with Red Roses and Petrol by Joseph O’Connor and on Sunday night by Doeega Drama Group with Done Deal by Martan O’Mongan.

Barndance, Many Young Men of Twenty and The Playboy of the Western World feature on the second weekend of the festival. A season ticket costs just €40 while admission for one night is €10.