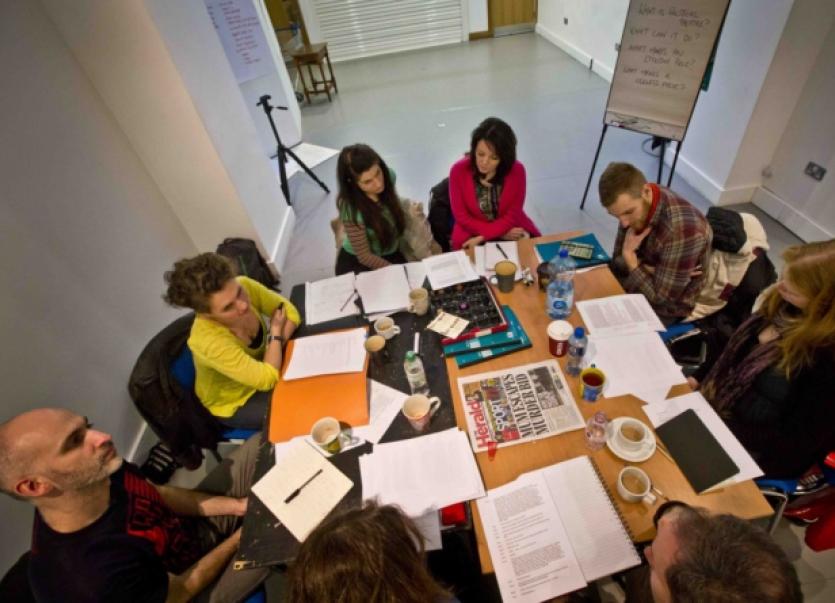 A THEATRE company renowned internationally for their work in engendering debate and galvanising action around political issues has visited Limerick as part of a new artist development scheme.

A THEATRE company renowned internationally for their work in engendering debate and galvanising action around political issues has visited Limerick as part of a new artist development scheme.

Theatre Uncut travelled to the city as part of HatchLK, a professional theatre artist development scheme designed to pass on resources and the tools to help practitioners hone their craft.

The brainchild of Louise Donlon in the Lime Tree and curated by actor and playwright Maeve McGrath, it is the first programme of work being run out of the new Limerick Arts and Culture Centre in 69 O’Connell Street.

After working with Theatre Uncut last weekend in a workshop environment to develop politically motivated theatre, the company will go on to work with Jennifer Moroney Ward and the Limerick Spring and Karen Fitzgibbon of the Limerick and Clare Education and Training Board in February and March, with a potential showcase of work in April.

It is a mentoring process, McGrath explains, to give these experienced artists the tools they need to develop and create exciting new work.

“We all have drawers at home, anybody who is a writer will tell you, with all your ideas inside them and you just need that little push,” says Maeve.

“They have tasks now that have to be completed - it is to get them thinking outside the box a bit more. Obviously all the ideas that have come are politically motivated in some way - and these are not necessarily water charges ideas, which is quite interesting.”

Maeve was approached by Donlon to spearhead the scheme. The Lime Tree boss says that the scheme “provides a great opportunity for venues to work with local practitioners in building capacity for artists in terms of training and development.

“The nature of theatre requires constant learning, challenging, trying new ways of presenting stories, and this scheme is exactly for that purpose,” says Louise.

Ann Blake, a theatre practitioner and musician with the Brad Pitt Light Orchestra, said she was “delighted to have been selected” for the project, and said the first weekend was “such a dynamic experience, discussing ideas and approaches to work”.

“The conversations continued out the door at the end of the day and into cafés. I am certain this project is going to generate some very interesting work for audiences to engage with,” she said.

Maeve elected on political theatre as a starting point for that very reason.

“I don’t think there is enough of it, certainly not in Limerick and the challenge is there to say things,” says Maeve.

“Theatre is a great place for putting things out there and I just think it is under examined, not just in Limerick.

“Theatre Uncut flew in and they are brilliant. They are just really interesting and exciting, and although political theatre happens in Ireland, there is not specifically anybody who is working with a company like that.

“It is a good time to look at political theatre.

“I also think it is lovely for Limerick that people can come here to train and develop - applications came from Europe, they came nationally and locally, so there are people saying they will travel to Limerick on weekends, for the writers hub, and that is cool, that is our legacy.”