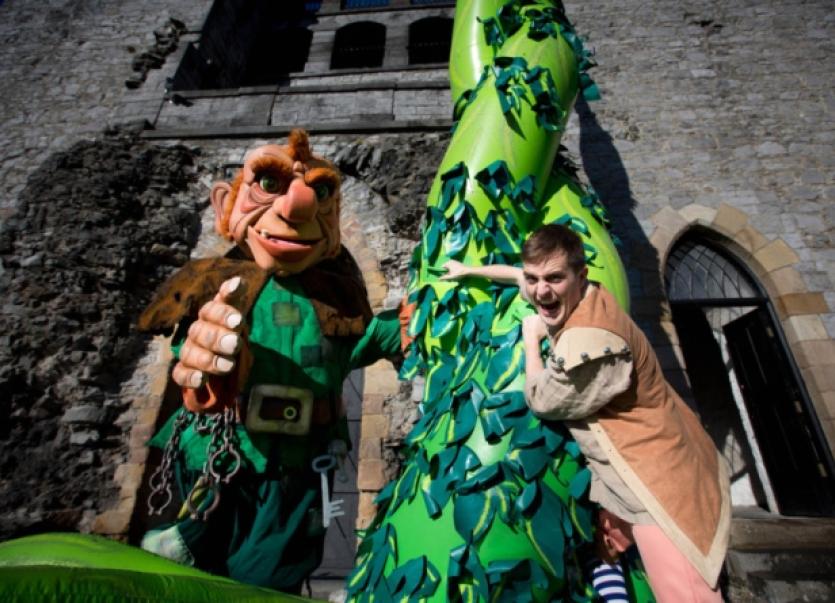 KING John’s Castle played host to a panto queen, a giant and a beanstalk this Monday, as the festive season began in earnest.

KING John’s Castle played host to a panto queen, a giant and a beanstalk this Monday, as the festive season began in earnest.

The launch of the University Concert Hall’s panto - its third fully professional production - took place in the 13th-century castle, with the stars of the show on hand to unveil Jack and the Beanstalk.

The classic panto follows successful runs of Cinderella and Aladdin, and producer Robert C Kelly has again assembled a ‘dream team’ of panto queen Twink - and her miniature Yorkshire Terrier - Fair City’ star George McMahon as the titular character and Limerick’s own Leanne Moore as his love interest Jill.

Amid the madness and panto mayhem are Myles Breen and Richard Lynch as Lord Flatulent and Fleshcreep respectively plus Richie Hayes as ‘Unbelievable Man’.

The producer promised a “giant of a pantomime” for the show, which opens on December 16 and runs until January 4.

“We have got a huge beanstalk and a fantastic cast and we are back for a third year,” said Robert C Kelly at the launch.

“The show keeps getting bigger and bigger every year. Now that we have the feel of the Concert Hall and we have got all that space, we can do really great things in there,” he added.

George McMahon - or Mondo, as his character is known on the RTE soap - returns this year after a year’s break from the production, and said that “the buzz of the audience” and the presence of Twink was what drew him back.

“It is the audience that feeds the show,” he said. “It really is dependant on the audience, you involve them as much as you can, no two shows are the same because you will have a kid that shouts up something they are not supposed to and you buzz off that.

“The thing about Jack and the Beanstalk is that it has some of the magical elements that some of the other pantos and stories don’t have.

“The giant, the beanstalk and the cow are really interesting for kids to engage with on the stage and that adds to the magic of it.”

Richard Lynch said the production team have “upped the ante” for this year’s panto.

“Jack and the Beanstalk is one of the most loved fables out there, it was my favourite as a child and this year is bigger and better than ever,” he said.

“I am so honoured to be part of it, you can’t explain the electricity of being on that stage, playing to a full house and seeing all the kids. A lot of it has to do with Adele, because she is magnificent on stage, she really is amazing.”

Limerick lass Leanne Moore will again star in show after roles as Cinderella and Jasmine in recent years, and said the story allows “loads and loads of room for different interpretations.

“It is a great story but there is just more room to play with it and it would be one of my favourites.”