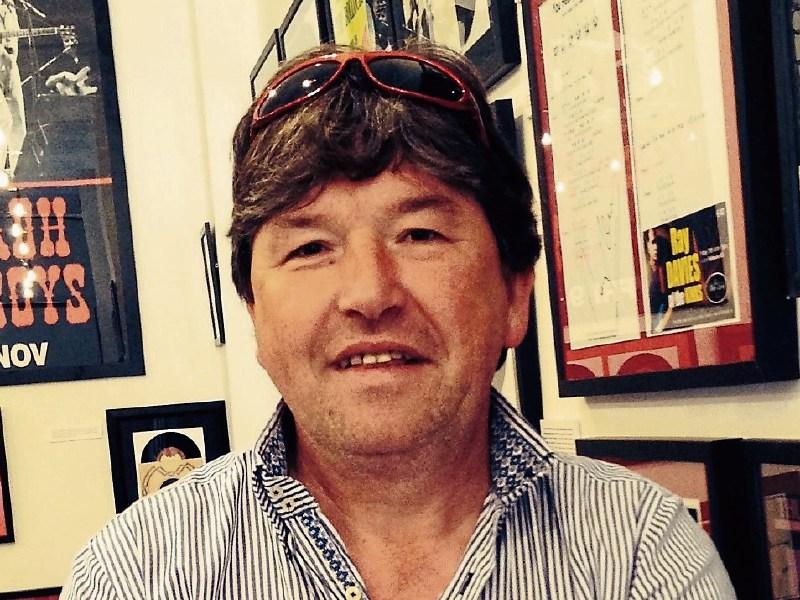 WHEN I first announced on social media that I was going to write a weekly features column for the Limerick Leader, focusing on local arts and entertainment many people contacted me, both publicly and privately, to congratulate me and to wish me well.

What surprised me, however, was the fact that there were quite a few people (mostly musicians) who said, “Good luck with that, there’s nothing happening” or words to that effect expressing the same negative sentiment.

Clearly they were missing the gigs. It gives me no pleasure to say that they were wrong. During lockdowns writers were writing, publishers were publishing, artists were painting and selling their stock through their online networks and, indeed, many musicians were experiencing fertile periods of creativity in song-writing, with some releasing albums! Of course we all missed the live performances, book launches, exhibitions etc.

This article is a profile of the well-known and much loved Nicky Woulfe who has been involved in public life for 43 years – as a DJ, promoter, broadcaster and director of ‘Woulfe Event Management’.

He started his DJ career in Kilkee, County Clare in 1976. Over the years he has played in many of Limerick’s nightlife venues – Jack Bourkes, The Basement in the Glentworth Hotel, The Speakeasy (now the Texas Steak Out), The Brazen Head, Tropics and Fernandos in the Royal George and The Shannon Arms.

Over the last 15 years he has done a classic hits night in the White House Pub which has been by far the longest residency.

Woulfe has run several events in a number of venues over the years where he booked the best of live music. These included Arthurs Warehouse on Robert Street now a night club, the Shannon Arms, The Speakeasy and The Cartwheel. He booked many Irish acts over the years, which included Mary Black, Mary Coughlan, The Fleadh Cowboys, Davy Spillane, The Black Velvet Band, Mary Stokes, Hothouse Flowers, Luka Bloom, Christy Moore, Johnny Duhan and Scullion, to name but a few. His company ‘Woulfe Event Management’ has been going 20 years.

Nicky also put together the Music Memories and Memorabilia Exhibition during Limericks City of Culture in 2014, and released the book of same in 2015 which was launched by Bill Whelan, of Riverdance fame!

Return to Radio in Lockdown

In the early days of 2020 Woulfe was running his own business and the future looked bright. “If I was to go back to the early days of 2020, and someone had observed my life and asked me to describe it, I would have said my life was in a pretty good place” says Nicky. It is clear from talking to Nicky that he loves his chosen field of work.

Nicky is very happily married to Cathy Halloran (RTÉ mid-west correspondent), his partner of 20 years. “I have three fantastic children, two of whom are now adults and one who is still going to school and, would consider my relationship with them as the best part of my life. I also have a core group of very close friends whom I value hugely” says Nicky.

Roll forward to March 2020 and “it was like someone turned off the light” says Nicky. His business came to a standstill and ceased trading. Life, as we all knew it, changed, with rolling lockdowns, schools being closed and business entered unknown territory. People had to adapt to a completely new way of living.

Ironically lockdown provided Woulfe with time to finally undertake the things he put on the long finger. He was without excuse! He had been keen to file his vast record collection for many years which he duly started and he also returned to reading from an extensive library of books which are mostly musical in content.

Nicky and his wife Cathy have been walking most days for an hour like many other people during the pandemic. They also have spent a considerable amount of time in his record room reconnecting with lots of music from their youth, particularly through albums that resonate with them.

Nicky misses the event management aspect of his life which resulted from lockdown restrictions. We all miss the simple pleasure of going to the cinema, the theatre, a concert, a book launch, an exhibition, a sporting fixture. I guess it’s only when we cannot go to them that we miss them the most.

So when Nicky got a phone call from Mike O'Connor to know if he would be interested in doing a programme on Limerick City Community Radio, which would be broadcast online five days a week between 2pm and 4pm each afternoon on www.lcr.ie he did not have to think twice.

Woulfe had worked in radio many times before as a contributor to Limerick Today with Joe Nash, Morning Ireland, Newstalk, Today FM and the Arts programme on Limerick City Community Radio with his friend Donald Thurlow who invited him onto his programme a number of times to give his opinion on cultural matters and Nicky filled in for him on a number of occasions as host of the programme.

Woulfe had not done a full time radio programme since the pirate radio days of ‘Sound Channel’, which was run at the time by the Taylor brothers Joe and Dominic, the latter is now Director of Limerick Writers’ Centre.

With his days unstructured because of lockdown, Nicky decided to take on the challenge of doing a full time radio show five days a week! “It would help me utilise two hours a day doing something I love, as well as giving me an opportunity to explore my record collection and play music I had probably not played in years” says Nicky. And so, ‘Afternoon Delights’ was born.

Woulfe put in a place a running order for the programme. Each day has two ‘Birthday File’ features, ‘Album of the Week’, ‘Classical Piece’, ‘Forgotten 80s’ file, an ‘Irish Rock Classic’ and he tends to play a couple from the 60s everyday as well.

“One thing that is really obvious to me during this lockdown is the creativity that is going on with artists and the amount of new material being produced by them and it is all of a very high standard. It's just great to see” says Nicky.

The ‘Album of the Week’ has featured lots of new material from local artists, like John Steele with his brilliant album ‘All My Days’ Alan Sheehan with ‘Same Kid Different Day’ from Trampoline Star and Paul Fahy with a lovely pop record called ‘Almost Blue’.

Nicky has returned to radio after an extended absence and finds now that he has listeners from New York, Kosovo, Bahrain, Japan, France, Norway, Spain and Italy…

In most cases they are Irish people abroad. But others are tuning in to the programme because they have come across it on social media, and have taken the music that is being played to their hearts. This is not altogether surprising as people are changing their listening habits by using the power of the internet to give them a vast listening choice from across the world, no matter where they are.

Woulfe is also now doing a programme on Limerick City Community Radio on Sunday nights called ‘Beyond the Vinyl Curtain’, which is playing album tracks from the last 60 years, and goes out on 99.9FM between 8.30 and 9.30pm. Nicky has missed his Classic Hits Nights in The White House and the Number Three pubs during lockdowns.

Nicky is continuing to work on his music museum project - it is developing day by day and he hopes to launch it in 2022 when visitors will be allowed to travel again. In the meantime he is working very hard to deliver this project for Limerick, the mid-west and the Wild Atlantic Way.

Woulfe is delighted to be back doing radio again, as it is a medium he loves and “a great way to give something back to the city and community I love” he says.