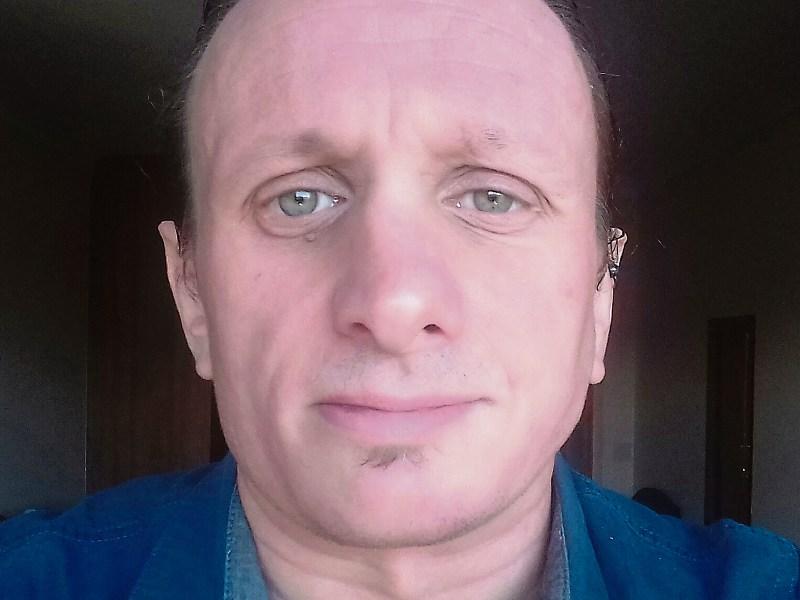 FROM TALLAGHT, I was educated in Terenure and after completing less formal studies in television and media in the late 1990s, attended Stillorgan College of Further Education.

I prepared my first portfolio of work under the tutelage of Pat Long, a graduate of Limerick School of Art and Design (LSAD) in the 1980s.Graduating from LSAD this summer I am currently studying as a mature student for my MA to be an artist educator at the National College of Art and Design (NCAD) in Dublin. A huge part of my time is spent actively attending exhibitions and talks to inform my ongoing studies. Also, I started working with fellow students in LSAD, who I do not get to keep in touch with as often as I would like. However, I am in the habit of discussing the cultures we participate in during lunchtime conversations at Ormston House on Thursdays. I am also a keen rambler and frequently go for walks which give me an opportunity of noticing the small, little details of humanity’s footprint.

What I get to do as an ‘artist educator’, is to provide learners with critical skills for creating relevant, thought provoking work.

For example, recently, President Michael D. Higgins was saying that education places too much emphasis on ‘value for money’ rather than ‘value for community’. He was discussing the phenomenon of the ‘brain drain’ and the resulting shortfall in development for critical thinkers in relation to the role that government has in terms of ‘free education’. In this problematic neoliberal climate, difficult economic view points provide rich pickings for an artist to make a truly valuable contribution. So, I can honestly say that anybody can, with a little bit of effort and time, come to contribute to the world as Art.

I have always enjoyed using a camera and indeed my father has a large semi-organized archive of family photographs; complete with handwritten captions (which he used to keep tucked away safe and sound).

However, I always went looking for this when I was bored especially on rainy days growing-up. He always seemed to have a camera, but there wasn’t necessarily always film. I often think about how fascinating it felt when he let me use the camera as a boy with every photograph worth a thousand words. So, I owe something of my developing practice to him. One day while having a chat with Maureen Considine, (an amazing artist and writer out of Cork), we discussed a snide remark which had been leveled at me by someone or other about what chances I had of ‘making much’ from my work. “Next time, look them right in the eye and inform them that it’s not about making money, that you make culture.” I haven’t forgotten that advice.

Today, I am concerned about the way that humanity is failing to notice changes in our environment and I regard the photograph/film as a great means of stimulating discussion about this.

The scientific method delivers an outcome which tends to be expressed in a language that requires a Degree to understand, along with sophisticated and often complicated graphs as illustrations. The same thing can be done successfully in a more involved way by heading outdoors with a group of people with some cameras, and taking a few landscape studies, or video rushes to document and represent human interruptions to the wilderness. Indeed, currently I am learning about artists such as Joseph Beuys, The Yes Men and Tania Bruguera who make you question when an exhibition is successful. They all work with knowledge like a child works with Lego and this goes a long way towards explaining the ‘click moment’ when you know it all works.

As a result of all this insight you may find a limited number of my works in truck stops along the M7 on the way to Nenagh.

For example, I have used USB keys attached to stone spearheads that I fashioned from pieces of slate procured from exposed rock faces. These works may seem like litter, but they haven’t been discarded, nor are they worthless, because they contain valuable information and the sites that I have placed them in are significant. Let’s call them ‘dead drop installations’ because they are not your run-of-the-mill rubbish in a rarified picture making process. In fact, in a hundred years time or so these pieces may begin to be discussed like the ‘Baghdad Batteries’ or ‘Greek Fire. Indeed, once I was apprehended for trying to walk to Nenagh along the M7 with the goal of photographing some of what the road has made visible. This caused me to make a film about pushing a broken-down car along the motorway as a means of legitimizing my roadside presence. It turned-up at the LSAD Graduate Show in June along with a bespoke video cabinet I made to look like the ‘monolith’ from the film; ‘2001: A Space Odyssey’.

Limerick is brimful of talent and with the development of enterprises such as Troy Studios, there is now a firm basis to anticipate and believe in further growth around media output.

However, I am critical of what has become of our media industry, because employment is now too centralized in other places. There is a danger, therefore, that creative people become alienated from one another. This is detrimental to the sense of community that should be nurtured. I am no accountant, but at the end of one of the X-Men films, the ‘credits’ give thanks to all those who bought the DVD. Therefore, by doing so, I was supporting the work of fifteen thousand workers. That’s a large community of people guided by a particular vision, namely to create a film!