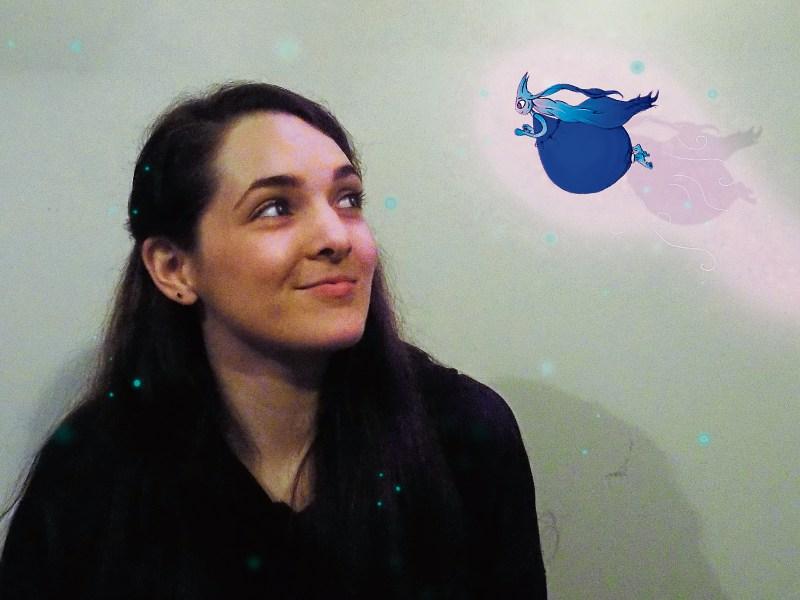 THE ELDEST of four siblings I come from the beautiful little heritage village of Ardagh, Co Longford (not Co Limerick!).

Initially, I went to primary school in Gaelscoil Longfoirt, then secondary school in Méan Scoil Mhúire both in Longford town. I, then, went on to Limerick School of Art and Design (LSAD) from which I have recently graduated with a ‘First’ in Animation and Motion Design. Since my degree show in July I have been freelancing from home relying mainly on animation and illustration commissioned work. I am not sure where I will be in a few months, (nor even in a few weeks). However, at the moment, I am ‘tipping away’ at various local projects and have, fortunately, settled here for now.

I was always interested in Art and drawing, and any copybook that I owned at school, tended to have loads of doodles in it.

In fact, I remember many of my teachers influencing me through the years. For example, my teacher, Tríona, from Gaelscoil, realised that I was extremely interested in drawing, and brought-in artists work, like Van Gogh’s ‘The Starry Night’ and Gustav Klimt’s ‘The Kiss’, to view. Then, she had us replicate them and actually let me keep going at the paintings until I was totally happy. My parents, Máirtín Smyth and Ann Gerety-Smyth, together with my grandparents, were always a huge support and inspiration for me. This is true also of my siblings, William, Paul, and Lily-May, who amuse and influence me on a daily basis. Crucially, it was my cousin, Annette Corkery, an Art Teacher, who partners my mother in running Ardagh Heritage and Creativity Centre, (a place buzzing with inspiration and creativity), who helped me with my LSAD entry portfolio.

Growing-up, I enjoyed watching animation, for example; ‘A Bug’s Life’, ‘Watership Down’, and ‘Rugrats’, while loving the process involved.

However, after looking at ‘how to’ videos from ‘Wallace and Gromit’, I thought it was something that I just wouldn’t have the patience for. However, that was until I saw the making of ‘The Bear and the Hare’ (the John Lewis advert) in college and I just thought that I don’t care how long it takes. In fact, if you can make something that beautiful and magical, let it take as long as it takes. I tend to animate in drawn 2D and specialise in character and background design work. I, also, love to build actual physical sets when I can as I love the look and texture of it on film. Making miniature environments is just fun, so it’s more like playing really.

Sometimes things just click and you see endless possibilities for creating your own worlds, and your own stories-your designs just come to life.

The frustration about how long it takes is surpassed immediately by being proud that you just made that. Over the years I have improved a lot but have more to learn. The concept behind my showpiece at the Be.cause Graduate Show 2017, ‘Twilight Tales’, was an exploration of childhood imagination. At this show, I also had my set from the piece, a 3D bedroom, which I built, sewed, and did everything for, but which was one of my favourite parts of the project.

Adults tend to recall the magic and nostalgia they once felt as children for that period in their lives.

My animated story was a woven together narrative based-on a collection of recorded tales garnered from my young sister, Lily-May, who was four at the time. The endearing, unpredictable quality of how she describes her thoughts was what influenced the visual style of the piece. The tale follows a young girl on her journey through her bedtime story. As the narrator tries to tell a coherent linear story, the child interjects with her own ramblings adding to the story as they travel through the magical universe of the tale. Then, as the real world, and the world of imagination interweave, the line between fantasy and reality increasingly blurs for the viewer.

Today, there are many colleges that offer courses to train practitioners in this industry but there are also growing numbers of studios in Ireland itself.

Increasingly, people are realising that it is now a huge industry. There are also institutes trying to link recent graduates to studios, while running courses that assist this process, for example, ‘Animation Skillnet’. The studios, themselves, are increasingly providing internships and new positions, now that they are making a name for themselves abroad and getting bigger. As regards my ambitions and plans for the future I am open to everything. For example, I am trying to say ‘yes’ to any new opportunity, project, or travel, that comes my way, and every week is different. I may try seeing if I can get into a studio soon, but at the moment, I just feel that I have a few more things to say ‘yes’ to first.

Limerick is fantastic for the arts, especially the opening of Troy Studios, which is so exciting, and I really miss the city since moving home.

There is a great community spirit here resulting in continuous campaigns for new developments in the arts. There are also constant shows and exhibitions which anyone can come and see. Having the Art College near the city centre is great for encouraging that too. So, overall Limerick should keep doing what it is doing. We may have not won ‘Capital of Culture 2020’ but it’s only the beginning not the end!