Artist who has a new exhibition at the Bourn Vincent Gallery in UL, running until January 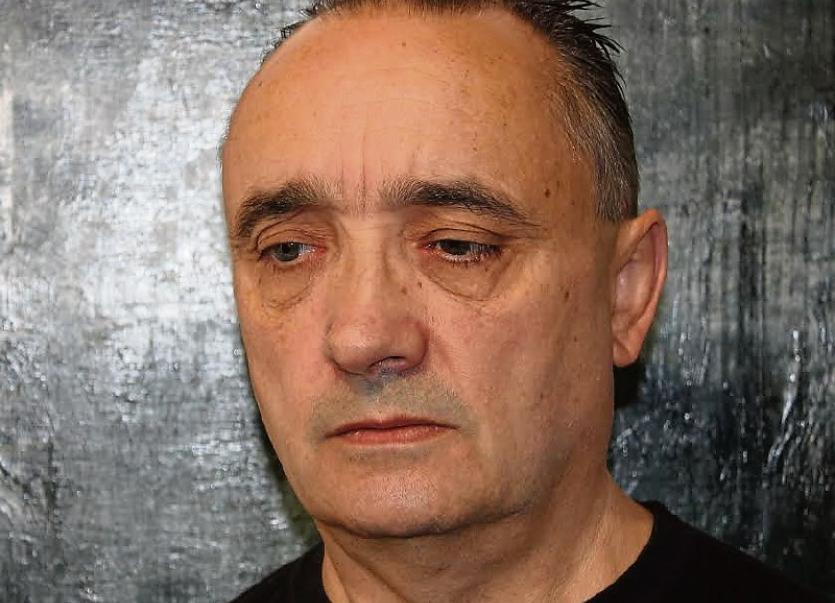 Born in Holles St Hospital, in Dublin, I now live in Drumcondra on the North side of the city.

Originally, I went to primary and secondary school at CBS Westland Row and then to college at the National College of Art and Design (NCAD). My father was a baker and cooking does have some connection with making art. Other than that, there was no artistic background in my family, and I was not encouraged to be an artist as such.

Most people are artists by nature but often lose touch with it while passing through the education system.

Today, I am a printmaker, painter and occasionally make sculpture. In all these media, I deal with the human figure and the landscape but neither are depictions of real life. Instead, they are generally figurative but bordering on abstraction. Art forms will always change and adapt over time. The question, then, perhaps, should be, do people value art in today's society, or has it simply become another commodity? However, hard it has been for my generation, young artists setting-out today have a struggle on their hands. Merely surviving requires far more than it did when we started. So, it is very difficult to be an artist in the current climate, particularly, with all the challenges presented by the digital age.

There are as many reasons why a person might want to be an artist as there are differences between people themselves.

Perhaps artists are flawed and can only redress the fracture or quirk in their psyche by fooling around with paint, ink or pencils. However, ultimately, the role of the artist is to make art. Artists are just like everyone else and cannot all be politically or socially motivated. There are so many other concerns, and on so many levels, that each person must be driven solely by their own personal leanings. That said, I am very wary of the need for an artist to engage with a concept, and/or to have a specific role that can only narrow each individual’s vision.

The depth of emotional charge that I am seeking through my art comes about in the form of a multi-layered image.

It reflects what appears to be a familiar space but the viewer’s eye is constantly being pulled-in, and then pushed back out again, by its myriad depth. My inspiration is, and has been since I started, western painting from about 1300 to 1800. I am aware that I cannot paint in the same way that the makers of these works did, but to understand them, I have dissected and reassembled their works, sometimes as hybrids of two or three, in a way that retains their emotional charge. By almost destroying them, while retaining their critical elements, I can allow them to hold our attention. This creates the familiar 'world-view' that is no longer relevant to our contemporary times but we can still relate to it.

My artistic style draws its inspiration from contemporary painters as much as it does from period painters.

For example, Howard Hodgkin, Philip Guston, Frank Auerbach, Willem De Kooning, Susan Rothenberg, and Joan Mitchell, to name but a few. To see spatial depth, perspective, and vaguely familiar forms, can be slightly unsettling but in a good way. If given time these paintings release more and more of themselves as the human eye notices details, that may or may not have been the artist’s intention. This very ambiguity serves only to keep the emotional expectation from ever being fully satiated- a constant and ever stronger relationship is, thus, maintained with the audience.

In fact, I have been supported and encouraged by three very fine Limerick painters over the past few years. They are Donald Teskey, Samuel Walsh and Maurice Quillinan, all of whom, by coincidence, come from, or live in, Limerick. There is a feeling of energy in the air here that is unlike any other place in Ireland. This is hard to describe and I cannot explain why. Perhaps, it is just in the nature of the people living and working in its environs.

My current exhibition at the University of Limerick consists of six large paintings which echo the work of old Masters such as Titian and Veronese.

They are ghosts, in a sense, of images that were seared into my memory by constant review. This took the form of compiling hundreds of catalogue and digital references to many thousands of works by the Old Masters. The sense of nostalgia, by which they are imbued is partly ‘collective memory’ but, also, shares in an ongoing, active, physical reconfiguration, of the history of western painting.

Inspired by a group exhibition, in 2015, based on the work of W. B. Yeats, I was immediately struck by the power of his poem; ‘The Second Coming’.

Although, I have been making works like these for many years I had not considered how humanity’s collective memory could resonate so powerfully at a subliminal level. This is really, what I am trying to do with these paintings at UL. That magnetic sensation of familiarity is really what the show is all about. In it, I try to avoid the word ‘concept’ as I am more comfortable with how things work at an emotional level. Take the last lines of Yeats’s poem, ‘The Second Coming’, for example, which refer to a ‘rough beast’, ‘slouch[ing] towards Bethlehem to be born'. Suddenly, his words have become frighteningly prophetic given the current situation forming directly before our eyes.