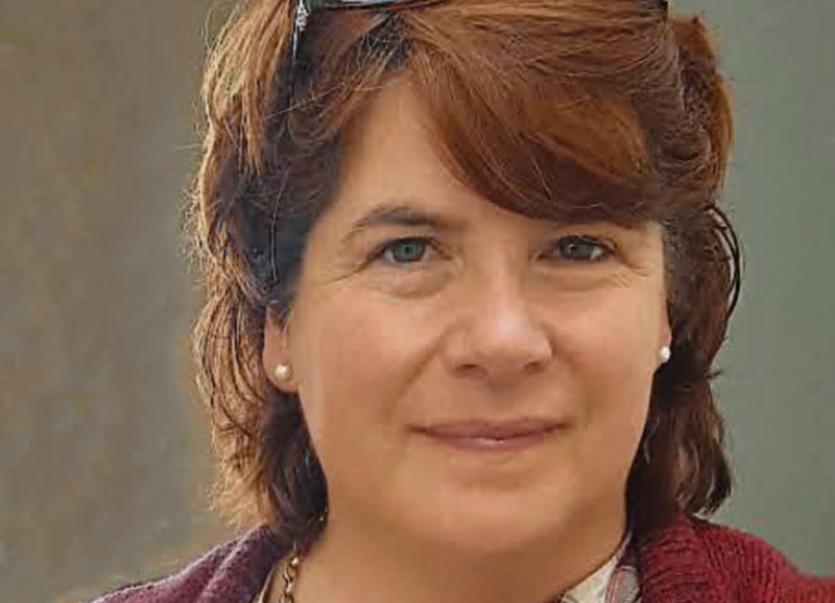 A BLOW-IN from Dublin, I wouldn’t move back there today, as I love living in Limerick too much.

I even support Munster over Leinster, today. I started my education at Scoil Mobhí, Glasnevin, one of the first all Irish schools in Dublin and moved on to Scoil Chaitriona, which was also an all Irish school. In 1989, I graduated from St Pat’s in Drumcondra, where I trained as a teacher with music as my specialisation. After college, I taught in Gaelscoil Naomh Pádraig, Lucan, which I loved. However, in a bid to escape Dublin traffic and for a better quality of life, my husband and I, moved to Limerick, in 2001, with our two small children.

My parents were always of tremendous support to me and, indeed, I grew-up in a family immersed in music, with frequent trips to the Gaiety and the National Concert Hall.

During my teens I played piano well, guitar badly and sang in various bands. Although I always drew and painted lots, it wasn’t until my twenties that I started life-drawing, painting and sculpture classes, with wonderful artists and teachers, such as Tom McQuirk, and Desmond Carrick of the Royal Hibernian Academy (RHA), and Gary Coyle, and Anne Marie Keaveney, in the National College of Art and Design ( NCAD). As with my first attempt to get into NCAD after school, which failed miserably, my second attempt was also nipped in the bud, but for happier reasons. In 1997, I was accepted to study Fine Art at night, in Dun Laoghaire Institute of Art, Design and Technology (IADT, or Dún-Laoghaire Art College as it was known then), but the following week I found out that I was expecting my first baby. Finally, in 2011, it was ‘third time lucky’, when I was accepted into Limerick School of Art and Design (LSAD), graduating in 2015.

Always artistically curious by nature, I wanted to draw, build things and make-up stories to the sounds I could produce on the piano, long before I could actually play it properly.

As a visual artist, drawing has always been my primary interest. Photography and drawing underpin my work as a printmaker and as a painter. Recently, I have been exploring a process of drawing with paint using one brush and one colour. I find it disappointing that there is so little emphasis on drawing in Art Colleges at the moment, but I firmly believe that this will come around again.

My most recent exhibition was in the Hunt Museum Café.

I was the featured artist for the month of April in a year- long group exhibition called; ‘Twelve’, run in conjunction with Limerick Printmakers. This work originated from the very large paintings on paper that I presented in my degree show last June, called; ‘The Past Is A Foreign Country’. The idea came from looking at how we have changed as a society in just two generations. I exhibited three screen-prints based on these paintings using a process that laid down layers of mixed, with decreasing levels of transparent, acrylic medium. This allowed me to build-up a print with the subtleties of a watercolour painting and the detail of larger paintings, condensed into a much smaller piece.

Everybody should be encouraged to explore their potential creativity.

This is especially important for children who tend to be over-scheduled if anything. I, also, worry that with constant access to the internet, people now never get to enjoy the boredom that drove us to experiment, and make stuff, for the want of something else to do. It is always difficult to be an artist, especially in Ireland, as our art market is practically non- existent. However, support is wonderful within the artistic community and nowhere more so, than in the ‘art college town’ that is Limerick. There is so much going on in our city, in terms of music, dance, writing groups and theatre. A lot is unofficial and unfunded but it thrives given the public support we have in Limerick. We certainly don’t become artists for the money; wanting to be an artist is like an itch you just have to scratch. Unfortunately, the necessity of having to earn a living gets in the way, and so many potentially creative people never have the time to go on that journey.

Photographing ourselves in this ‘selfie generation’ has become more about how we look, and who we can tell about it, than about capturing memories.

Our whole body language has changed so observing this aspect of modern life interests me greatly. Broadly speaking, the human figure and the way people behave and interact around it, fascinate me the most. I am, also, interested in making work abstracted from interesting structures. A painting I based on the handcrafted roof trusses of Limerick Boat Club, (after the roof blew off in 2014), is now part of the IMPACT Trade Union’s permanent collection.

I usually do the work first and think about a title to suit it afterward.

The President of Shannon Rowing Club asked me to put on an exhibition, and given that it is that Club’s 150th Anniversary this year, it would be nice to reflect that in some way. I may collaborate with some other artists on a group exhibition and all options are being explored. As yet it is still evolving as an idea. There are certain problems to be overcome, such as how to hang work in a listed building. Aside from this, my next venture will be with Limerick Printmakers at the Belltable in August. It is an exhibition entitled; ‘Remembering and reimaging: Do we treat all of the nation’s children equally 100 years on?’