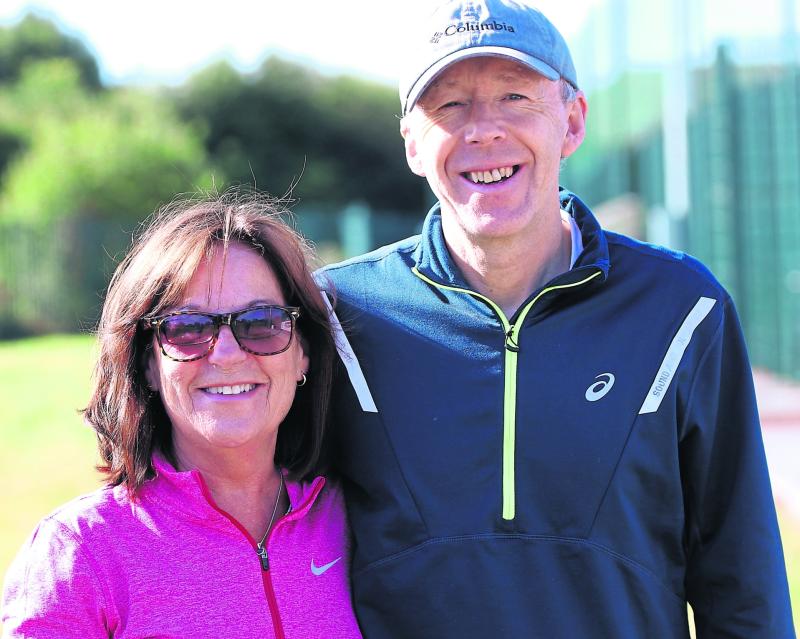 Donal and Catriona O'Connor watching the meeting of Regional United and Janesboro in the LDL Premier Division on Sunday last Picture: Brendan Gleeson

Ballynanty Rovers 4 Fairview Rgs 1
League leaders Fairview Rgs lost their unbeaten run on Thursday evening when Ballynanty Rvs turned in a scintillating first half performance that saw them run up a 4-1 lead by the break. While the tempo eased up after the break the home side held on with ease to seal a memorable win.

Balla' were superb on the night and none more so than newcomer Josh Adams who powered home two headers to top off a superb performance.

Fairview will be concerned that they conceded four goals from set pieces in a below par performance all around the park.
The game was only minutes old when Adrian Power put the ball across goal where Eddie Byrnes nudged in front of his marker to finish to the net.

Fairview were on level terms shortly after when Darragh Rainsford cut inside his marker and fired home from 15 yards.
That was as good as it got for the visitors and they were behind again when Adams rose highest at the back post to head in from James Fitzgerald’s excellent delivery from a corner kick.

It was 3-1 shortly after when Adrian Power swiveled and fired home in a crowded goalmouth.

With Fairview begging for the half time whistle Balla struck again. Another excellent delivery, this time from Cian Fitzgerald, was met six yards out by Adams who powered his header back across goal into the far corner.

Fairview tried to up the tempo after the restart but a resolute home defence was having none of it as they withstood anything Fairview could throw at them.

Nenagh AFC 3 Carew Park 1
Nenagh made it five games unbeaten when they beat Carew Park 3-1 on Thursday evening in Nenagh.
The result, while continuing an impressive run, also moves Nenagh into sixth place with just two games remaining before the league splits into top six and bottom six.

Carew Park took the lead through Arron Nunan with his seventh of the season.  Kieran Barr levelled the tie shortly after and an own goal tilted the tie Nenagh’s way.

Matt Spain made sure of the spoils against a Carew side who finished with nine men.

Coonagh Utd 0 Pike Rvs 1
Premier League holders, Pike Rovers maintained their 100% record, but only just, at St Nessan’s College on Tuesday when they narrowly defeated a hard-working Coonagh side thanks to a second half strike from Paudie Murphy.

Pike’s victory will be tempered following an injury to midfield supremo Steven McGann that saw him carried from the park.
While the extent of the injury remains to be seen, the Hoops will be keeping their fingers crossed.

Coonagh have been having a tough time to date in the Premier League, but they were excellent on the night and deserved something for their efforts.

That said, but for a couple of superb saves by Josh Sheehan (before his injury) and replacement Kieran Simmonds, the scoreline may have been much different.

The winning goal saw Colm Walsh O’Loughlin loop a ball into the box and Sheehan raced from his line to punch clear of Kevin Barry but with the keeper down injured the ball fell to Murphy who volleyed to the back of the net.

Charleville 2 Regional Utd 6
Regional Utd picked up another good win, beating Charleville 6-2 in Dooradoyle.
Leading 3-0 at the break, the hosts added another couple before the visitors replied.

In the Premier A League it was a first defeat for Geraldines when they fell 3-2 to Corbally Utd.
Scott Kelly and Kane Connolly scored for Geraldines but a double from Alan O’Doherty and one from Conor Madigan won it for United.

Keith Kane and Lorcan Feeney were on target for Athlunkard Villa in a 2-1-win Murroe for whom Brian Quinn replied.
Goals from Brian O’Sullivan, Paul Ryan and Jay Ryan helped Newport to a 3-1 win over Aisling Annacotty. Darren Coughlan replied.

In Division 1A, Star Rvs won 3-1 at Holycross, Jason Daly kicked off his account with a double. Jordon Guerin also netted.
Keith McNamara (2), Eric Clancy, Stephen O’Halloran and Nicky O’Connell scored for Caherdavin in a 5-2 win at Southend.

In Division 1B, Caherconlish move four points clear at the top thanks to a 4-1 win over Aisling C. Shane Henry bagged a hat trick while Dean Power also scored.
Parkville with goals from Ben Frost (2), Ethan Hannon and Keith Moran breezed past Patrickswell.

In Division Div 2A a brace from Jordan Clancy helped Lisnagry to a 2-1 win over Corbally which puts the winners in a tie for top spot.

Jamie O’Reilly scored twice for Kilmallock B who edged out Charleville B 2-1 while goals from Nenagh’s Casey Finn and Kieran O’Brien beat fellow Tipperary side Newport B.

Oisin O’Grady and Wayne Wright scored for Herbertstown in Division 2B when they beat Pike Rvs B 2-1.
In Division 3B, Geraldines made it five from five wins with a 4-2 win over Corbally Utd C.

Granville ran in a big win over Moyross; Alex Fitzgerald, Jamie McNamara, Dylan Meehan and Leonard O’Grady were all on the mark.

Summerville beat Caherdavin Celtic B by the odd goal in three. Mike Nseka and Shane Kiely were on the mark.