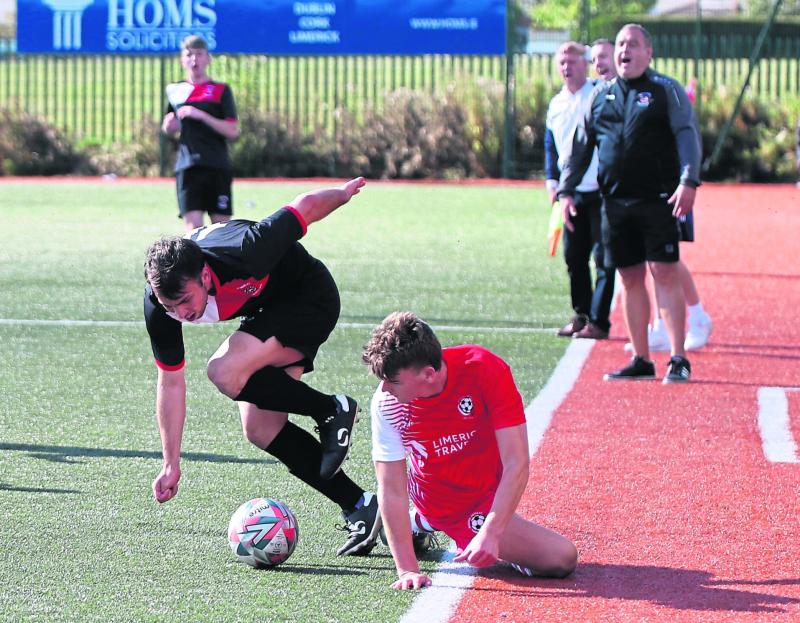 THE Munster Junior Cup takes centre stage this weekend and following Fairview Rgs’ superb win last season when they beat St Michaels 3-0 in the decider, hopes are high that the trophy can remain on Shannonside for another season.

There are a number of tricky assignments for the Premier sides against lower league opposition while we have two all-Premier ties.

Holders Fairview Rgs take on an Aisling Annacotty D side that possess a host of Premier quality players.

They boast former ‘View striker Jason Lipper and Brian Butler in their line up and they even had the luxury of rolling out Limerick hurling star, Geaorid Hegarty last weekend and he chipped in with a hat-trick.

That said, they face a different type of opponent on Sunday as Fairview Rangers are motoring along fine as they lead the Premier League race.

The holders are determined to retain their title and if they avoid complacency, they should get over the first hurdle.

Aisling Annacotty face the short trip to UL to take on Brazuca Utd A. Plying their trade in Division 3A, Brazuca have some superb players in their ranks but will find an in-form Aisling Annacotty side too hot to handle.

They beat Mungret 3-0 in the League last Sunday but struggled for long periods to turn their possession into real chances, but patience won out.

On Saturday evening Regional Utd A host Pike Rovers B and would be advised not to take their visitors for granted.

If the Premier side perform to their ability, they should ease through but anything off the pace could encourage the Bees.

Two teams struggling in the Premier have a chance to put their league worries aside when Coonagh Utd A host Charleville.

In the other all-Premier tie, another struggling side, Mungret Regional are hoping to get a break that could kick start their season. They meet a Nenagh AFC side who seem to have found their feet after a poor opening week.

Janesboro are pinned in the relegation zone at the moment, and they meet Caherdavin Celtic on Sunday when the visitors will be looking to cause a shock.

Ballynanty Rovers will be looking to return to winning ways after dropping points in a draw with Nenagh last weekend. They host Knockainey on Sunday.

Carew Park travel to Mungret Regional B looking to get back to winning ways after a slip up to Aisling last time out.

In the Munster Champions Cup, Limerick’s representatives, Pike Rvs host Munster Senior League reps, Everton. This trophy has evaded the District League for a number of seasons and a return would be welcome. Pike were the first team to reach Round Two of the Munster Junior Cup last weekend when they defeated Caherconlish. While delighted with the win, they will need an improvement for Sunday’s game.

Sunday also sees the kick off of the FAI Youth Cup.